Corporation of Good, Google has made a lot of good deeds, so people loved it for this. Then Facebook came, which is popular very much. Perhaps jealousy or envy has changed something in the minds of the good magicians, and they began to look for a way to destroy Facebook. They even got a corporate term WWF (War with Facebook). In addition, there were assigned special commanding officers, responsible for this war with their general Vic Gundotra.

Who is using the Google Wave? Why?

According to the estimates and information from confidential sources the Wave had approximately 100 000 to 300 000 active users in November 2011. Among them were: the Web developers, broadcasting station groups, photographers, professors, government bureaucrats, lawyers, venture capitalists, owners of luxury-fashion boutiques and the builders. 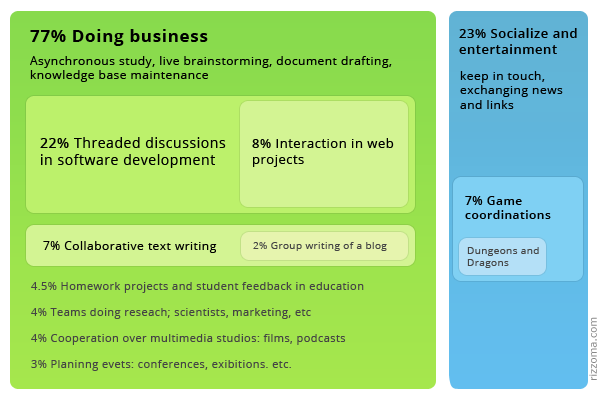 The users’ activities of Google Wave. An alternative representation as a cloud of tags.

In order to understand what users are doing in the wave, we asked them: "Why do you use the Google Wave?” As a result, we saw an interesting picture of an average life of the project:
1. Asynchronous research. There were not too many project participants.
2. The remote brainstorming, there were 5 to 15 people simultaneously in a single wave.
3. Drafting of documents. Most of the participants scattered, and a couple of activists bring work to the end.
4. Supporting of knowledge base. The project is essentially completed, and the wave is used further as a wiki.

The average team size was 15 people: 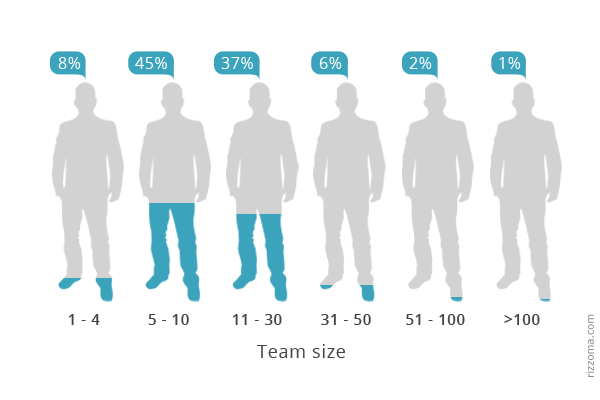 A significant number of users said that they used the GW for solving the business tasks, personal communication and the entertainment. In addition, we found a curious fact that some users were members of the several teams that worked in the Wave.

Live collaboration is the best that was in the Wave

To the question "What do you think was the best in GW?” Most respondents agreed that the Wave really realized the possibility of working together in real time. Take a look at the word Collaboration in this cloud of tags:

12% of the audience agreed with the concept of Lars and Jens Rassmussen that the Wave combines an ordinary messenger, email, forums, blogs and the social networking. Many people say that this is the difference between Google Docs. For those who have not seen the Google Wave, here's a screenshot of interface.

It is also interesting to note that the top management of Google relied on the Wave in their long battle against Facebook.

Based on the answers of the respondents, we divided the users into the groups of features that they considered the best:

The Waves developers had great expectation for the gadgets and the robots. However, only some of them considered them useful. Although it turned out that a gadget for voting became very useful.

In general, the Wave had a lot of good things. A reasonable question arises, why such a good service did not become popular among a wider audience?

At its very start the project met a lot of technical difficulties:
•The developers had to rewrite Chrome for the Wave. Problems with other browsers have not been resolved.
•There was planed an integration module with Gmail, but many technical issues were not overcome and the project was closed.
•It turned out that the Wave was consuming a lot of resources, and it is very demanding on the quality of Internet connection.

The information was received from the developers of Google Wave. Here is the users’ opinion about it: 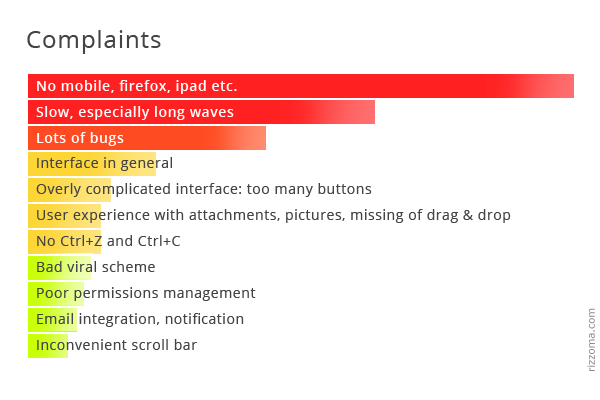 Users’ complaints: another look of this data

According to our information, the users (consumers) were the Wave target audience. The Wave development team was tasked to gather one million active users per year. This task was not too complicated, because they had Google’s PR support. If you look at the problem of Wave in terms of a model to gather the audience and marketing, we see very serious omissions:
•Inviting tool for new users to the service worked very badly, and one month after the opening it broke and no longer worked.
•There were not any content publishing tools from the Wave to the public places. To be more precise they were, but not for the average user.
•There was not any integration with Facebook. I wonder how Google intended to entice the audience, if you cannot login into Facebook account.

It became clear slightly less than half a year after launch of this project that the cherished 1 million is not reached. At the same time, it became even clearer that the Wave is much more interesting for business than for the regular users. That means that the profitability of one business user is much higher than the regular user, so the criterion of success in this segment is clearly lower. For the top management to leave the consumer market meant the rejection of the idea to defeat Facebook.

The decision of Google's top management could be understood from another side: if Google Wave would be focused on the business audience, they get a serious competition to. Actually, some Wave features were moved to Google Docs.

In my opinion, the main reason for failure lies in the lack of well thought-out user experience. Google’s presentations show us how beautiful and live the users begin to communicate in the Wave. What happened in practice? Interesting Wave attracted new people, and the number of messages grew like a snowball. Here you are, a simple American, decided to visit the Wave this evening in order to talk about the liquidity crisis, and you see either a blank Wave or the Wave with two greetings where everything is unclear for a long time:
For example, if you asked someone a question in such a long Wave the addressee simply will not see it.
The Wave search tool also was not well thought-out. 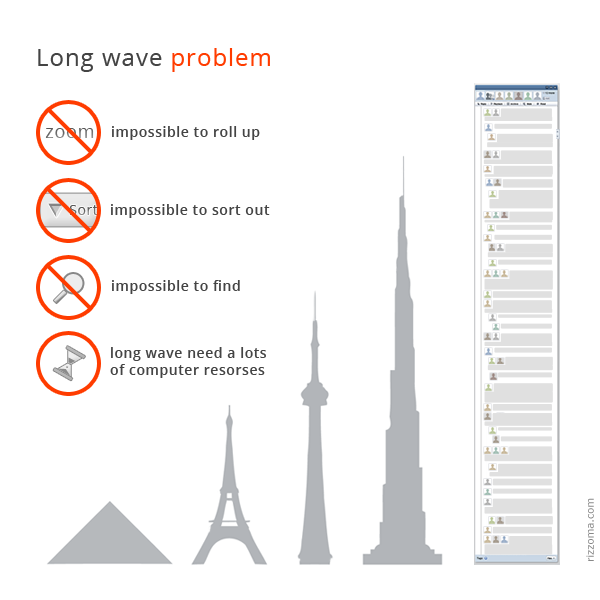 Good-bye Google Wave! We loved you. We are sending greetings to the creators of this project Lars and Jens Rasmussen.
Tags: collaboration, Google, google wave, rizzoma, rizzoma.com
—