Introduction
Do you know buffer amplifier or isolation amplifier? As we all known, the op amp is a component that amplifies the weak signal, which can be made into different forms according to the circuit requirements, and the voltage follower is one of them. The output signal is exactly the same as the input signal, here voltage divider is used to isolate the signal and enhance load capacity.

1 Voltage Follower OP Amplifier
The op amp follower sacrifices the voltage amplification factor in exchange for the performance of increasing the input impedance and reducing the output impedance. Because the gain of the op amp is extremely high, the input impedance of the op amp follower tends to be infinite, and the output impedance tends to zero. Within the rated output current range, the feedback voltage is equal to the output voltage, the output voltage is in phase with the input voltage, and the output voltage is slightly smaller than the input voltage. It should be noted that voltage follower is a special case of negative feedback amplifier (voltage series).
Op amp voltage follower is actually a simple circuit structure which play a role in impedance matching. When a weaker signal is used to drive a relatively high current, voltage follower is often added in the middle, so that it can make weak signal stronger. It improves the load capacity to a considerable extent, while ensuring that the waveform and amplitude of the signal remain unchanged.
For example, a single-chip microcomputer outputs a PWM signal to control LED lights. One LED does not require much current, so there is generally no big problem, however, when multiple LEDs need to light, current may definitely not large enough. If the current output is not enough, which may affect the signal output by the single-chip microcomputer, in this way, the voltage follower comes in handy. 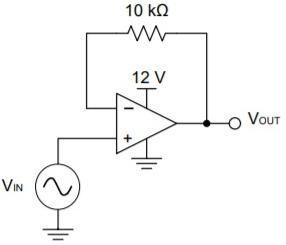 2 Voltage Follower Characteristics
2.1 Op Amp Impedance Matching
When the op amp gain is approximately 1, that is, the magnification is approximately 1. The "follow" in the follower means that the voltage remains unchanged before and after, and the output waveform is almost not lost. It can be composed of transistors or operational amplifiers (best). Because the op amp input impedance is large and the output impedance is small, voltage follower can reduce the impact on the signal and improve the load capacity.

2.2 Buffer Amplifier & Isolation Amplifier
Here is a question, how to understand the buffering effect? Is the voltage of the former having a small impact on the back circuit? No, it is equivalent to a constant voltage source. Within the design requirement, no matter how the circuit connected to the subsequent stage changes, the output voltage is constant and does not change. In this way, the magnification or other performance of the previous stage can be kept unchanged. Otherwise, if the previous-stage input impedance is large, and the latter stage is small, the signal will definitely be distorted. For example, if a sinusoidal voltage waveform with a peak value of 10V, the sinusoidal peak value loaded to the latter stage may only be 8V. After adding a voltage follower, the waveform loaded on the input of the voltage follower will basically not change, and the input-output stage voltage ratio is very close to unity. So there will be no distortion.
Since the output impedance of the voltage amplifier is generally relatively high, usually in the range of several kiloohms to tens of kiloohms. If the input impedance of the subsequent stage is relatively small, part of the signal will be lost in the output resistance of the previous stage. At this time, a voltage follower is needed to buffer from it. Another advantage of applying a voltage follower is that the op amp input impedance is increased, so that the capacity of the input capacitance can be greatly reduced, which provides a prerequisite guarantee for the application of high-quality capacitors.
Another question, what about isolation? Because the op amp input impedance of the voltage follower is very large, it can be approximated as an open circuit. Of course, this open circuit is for the previous circuit. In this case, the previous circuit will not affect the subsequent circuit. However, "open circuit" means what, is it really open? No, the previous voltage is transmitted, but the corresponding current is not transmitted. This is the isolation effect.
For example, if the MCU outputs a PWM waveform, you want to use it to control the brightness of a small light bulb. However, the output capacity of the IO port of the general MCU is limited. You can directly use the PWM output from the IO port to drive one light bulb. More than one doesn't work. In this case, you can add a voltage follower, so that the voltage is still the original voltage, but the driving ability has improved. Of course, the output capacity is not increased out of thin air, but comes from the input power of the op amp. In electronics, the diode has current amplification capability, and its source of amplification capability also comes from the power supply.
In Hi-Fi circuits, the controversy about negative feedback has been around for a long time. In fact, if there is no negative feedback, most amplifying circuits will not work well. However, due to the introduction of a large loop negative feedback circuit, the back EMF of the speaker will pass through the feedback circuit and be superimposed with the input signal. The sound quality is blurred and the clarity is reduced. Therefore, some of the final stages of the power amplifier adopt a circuit without large loop negative feedback, trying to eliminate the disadvantages by disconnecting the negative feedback loop. However, since the operating current of the final stage of the amplifier varies greatly, its distortion is difficult to control. Here, the function of the voltage follower is just for the application. Putting the circuit between the front stage and the power amplifier can cut off the interference effect of the back electromotive force of the speaker on the front stage, so that the clarity of the sound quality is greatly improved.

3 Op Amp Follower Circuit Analysis
3.1 Op Amp Voltage and Load
The output and the inverting input terminal are connected in series with a 10k resistor to ensure excellent characteristics. An ac signal is input at the non-inverting input terminal. Of course, dc and ac are all okay, so you will get a very high voltage at the output terminal. AC voltage that is similar and has excellent load capacity, with buffering and isolation effects.

3.2 Op Amp Voltage Follower Stability
The problem of using a voltage follower to keep the operational amplifier stable, that is, how to reduce the oscillation in the amplifier circuit using negative feedback to maintain stability, there is still no final conclusion. The ideal operating state of the op amp is that the output voltage and the input voltage are in phase, that is, when the applied voltage at the negative input causes the output to increase, the op amp can reduce the increased voltage accordingly. However, there is always a difference in phase between the input and output in reality. When the phase difference between the output and the output is 180°, the negative input and the positive input are exactly the same, but the output that should have been reduced is enhanced. It becomes a state of positive and negative collapse. If it falls into this state in a specific frequency band and still maintains the original amplitude, then the output frequency and oscillation state will continue. 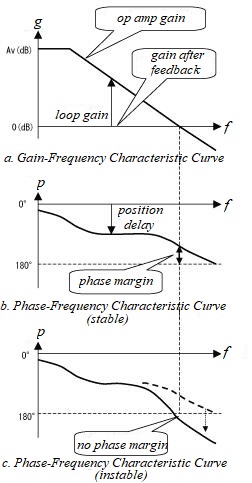 Fig a and Fig b respectively represent the voltage gain-frequency characteristic and phase-frequency characteristic of the operational amplifier. As shown in the figure, the voltage gain and phase vary with frequency. The difference between the op amp gain and the gain after feedback (0dB when using a voltage follower) is the gain (feedback gain) of the feedback loop. If the feedback gain is less than 1 time (0dB), then, the phase changes by 180° and returns to the positive feedback state, the negative gain will gradually attenuate in the circuit and theoretically will not cause oscillation.
On the contrary, when the phase changes by 180°, if the loop gain corresponding to the frequency is 1 time, the original amplitude will be maintained. If the loop gain corresponding to the frequency is greater than 1, the amplitude will gradually diverge. In most cases, in the process of amplitude divergence, the amplitude is limited due to the influence of nonlinear elements such as the maximum output voltage, and the oscillation state will be maintained.
Therefore, the difference between the phase corresponding to the frequency when the loop gain is 0dB, 180° is an important factor for judging the stability of the negative feedback loop, and this parameter is called the phase margin. Unless otherwise specified, when a single amplifier is used as a voltage follower, sufficient phase margin must be maintained (Fig b.).

MeLavi Emerge Tools (YC W21) Is Hiring a Senior Android Engineer – Remote
Enyman Rockstar: A programming language for hard rock metal fans
Enyman Programming War Stories: macOS Freeware/Shareware
Enyman A few things I’ve come to believe in my years in music tech
BumBum I Host This Blog from My Garage
Enyman Interview success can depend on how you schedule interviews. Here’s how
Masyk Over 200 newspapers now involved in lawsuits vs. Google, Facebook
xially AWS Console is returning HTTP 500 errors
KlauS Advice for music startups: 'Discovery is not a viable product'
kleop A submarine's weakness: its software?
All in live
© 2011-2021 UMumble. All Rights Reserved.