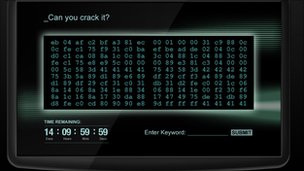 The organization has invited potential applicants to solve a visual code posted at website.

The challenge has also been "seeded" to social media sites, blogs and forums.

A spokesman said the campaign aimed to raise the profile of GCHQ to an audience that would otherwise be difficult to reach.

"The target audience for this particular campaign is one that may not typically be attracted to traditional advertising methods and may be unaware that GCHQ is recruiting for these kinds of roles," the spokesman said.

"Their skills may be ideally suited to our work and yet they may not understand how they could apply them to a working environment, particularly one where they have the opportunity to contribute so much."

KlauS Element raises $30M to boost Matrix
v1d0q Bitmovin (YC S15) Is Hiring a Chief of Staff
BumBum Collision Detection Is Hard: The Story of Alf
v1d0q Why the Substack hype is much ado about very little
xially For developers, Apple’s Safari is crap and outdated
xially I Created a $350M Software Company Knowing Nothing About Software
Enyman Israeli military search team helped recover majority of Surfside victims
Sparks Tesla second-quarter profits top $1bn even as it struggles to handle demand
MeLavi Autofill in password managers can allow login credentials to be stolen
Siera Counterfactuals are not causality
All in live
© 2011-2021 UMumble. All Rights Reserved.