markcorwin 25 august 2019, 14:03
Add Comment
JavaScript The average size of JavaScript increased by 48% during the year

HTTP Archive statistics shoes the explosive growth of JavaScript in the Web. A year ago, the average size of scripts was 128 KB per the page, and now it is 189 KB. 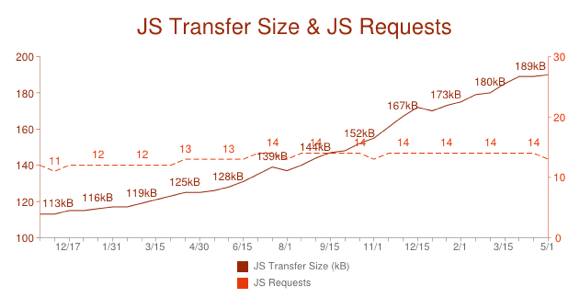 On the one hand, it is great that this programming language is going through a sort of rebirth and the universal popularity. On the other hand, the expansion of scripts size loads up the browser and has a negative effect on the loading time of pages. It is very sad that to download one tweet (140 symbols) requires 1.65 MB of scripts.
Tags: LavaScript, Optimization
+1

SELECT avg(amount) FROM transfer;
65.125965782378
generated in 3850 seconds
Now let’s imagine that the index should be the latest one, the entries are made every second in the table, and after a month there are millions of them. To aggregate the same data each time is very expensive. Traditional databases do not offer such optimizations. What to do?
More detail...
Tags: databases, django, Optimization, orm, sqlite
0

The most common code elements without which it is difficult to imagine a functional script are the following things:
- Creation, assignment and removal of variables (numbers, strings, etc.).
- Creation of arrays and their bypass (as an example will be used the function foreach).
- Passing and return values for functions / methods.
More detail...
Tags: arrays, memory usage, Optimization, strings
+2

BumBum 9 february 2012, 14:16
1 Add Comment
C++ Is it reasonable to use the prefix increment operator ++it instead of postfix operator it++ for iterators?