MSL Curiosity did the most detailed geological research on Mars 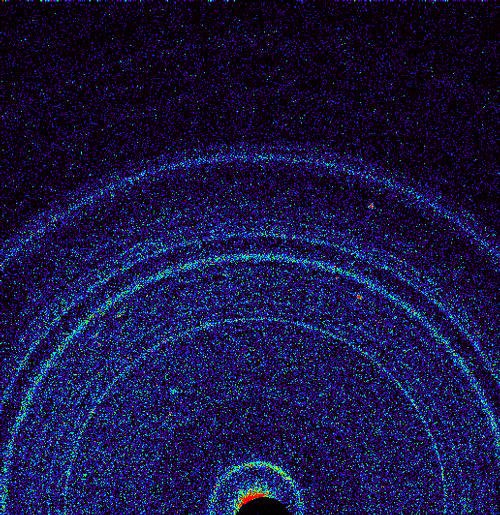 On October 17, MSL Curiosity scooped up the sand for the third time, and then it sieved using CHIMRA processing unit, as well as it used the Chemistry and Mineralogy instrument, or CheMin to identify and measure the abundances of various minerals on Mars. The first two scoops of sand were not used for tests, because of risk getting the plastic fragments into the samples that were fell off from Mars rover.
CHIMRA sifts only particles less than 150 microns, but NASA did not want to rely on a sieve, so they just kept getting following scoop of soil, in order to get a real local sample without any alien additives.

This video that was shot on the Earth shows the sand sampling process.

After sampling process by the CheMin, the sample got into the round glassy cell that has a diameter of 8 mm and a thickness of 175 microns. These cells are located in the petals of wheel device, which delivers the samples for exposure to X-rays using a revolving principle. 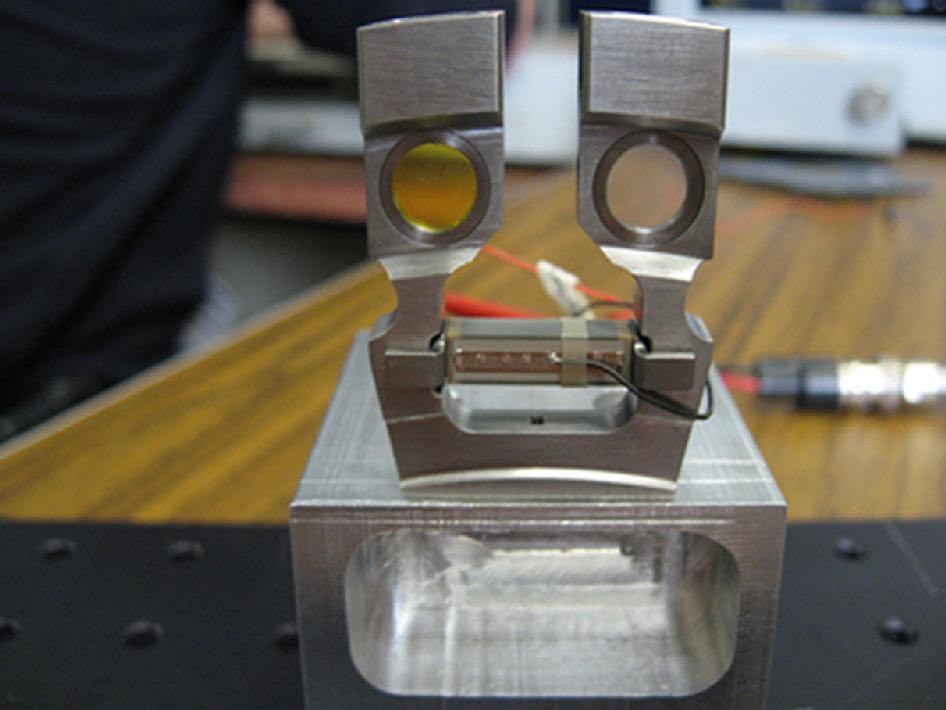 When the cell stops in front of the radiation source, it starts vibrating at a frequency of 2 thousand cycles per second. Due to of this, the sand gets the liquid structure in the cell, and it starts circulating inside of it. Therefore, a thin as a human hair beam scans the set of particles.
Here is Mars Science Laboratory Curiosity Rover Animation that starts from 9:08.

This technology was developed by NASA and it has reduced the size of the X-Ray Diffraction devices to the size of a suitcase. Now it is used by geologists in the fields, and as well it has been used in the pharmaceutical industry. 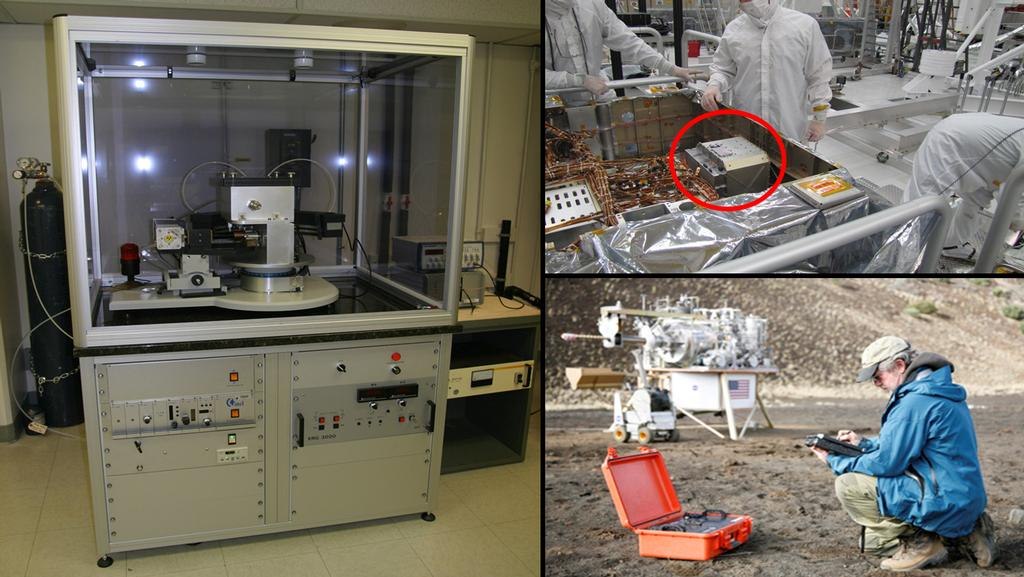 X-ray Diffraction involves X-rays breaking in the mineral crystals, and the fixing this breaking at the photomatrix. The CheMin instrument is equipped with CCD photomatrix that has resolution of 600 by 600 pixels. 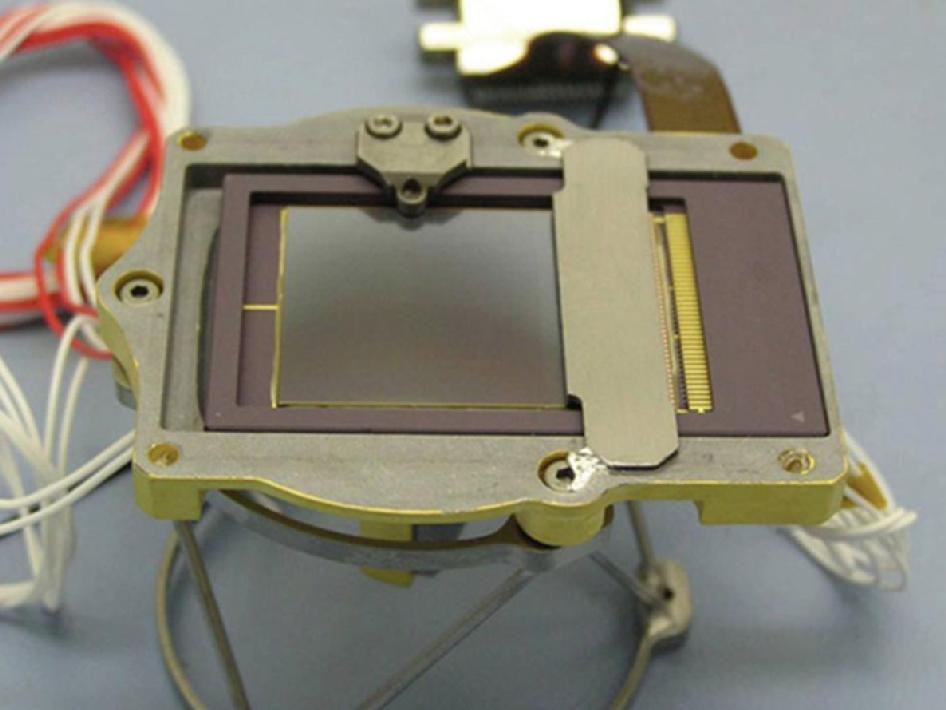 The optimal operation mode requires 60 ° C temperature, and therefore the study was being conducted at night, when the device reaches the desired temperature, otherwise the noise of the neutron generator unit DAN will be reflected at test results.

The geologists are already familiar with the diffraction patterns that show the certain crystal structures, so they only need to get a picture from Mars, and to determine what the Mars rover examined. The picture is posted at the beginning of the article. The first study showed that the sand has a typical structure of volcanic soil that contains feldspar, pyroxene and olivine. Here are pictures of the terrestrial olivine samples: 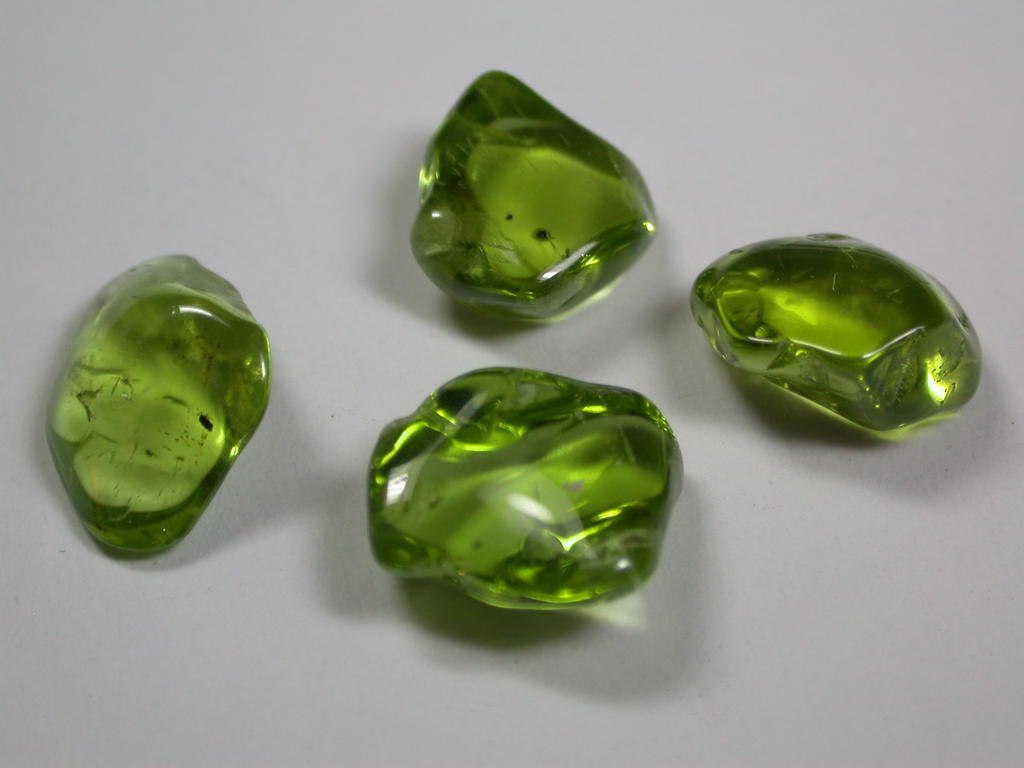 By the way, the same crystal structure had about half of the studied sand particles, and others had an amorphous structure, and they did not leave any “fingerprints” in the photo.

Virtually, the same structure has the terrestrial volcanic soil, for example, at the foot of Mauna Kea in Hawaii. 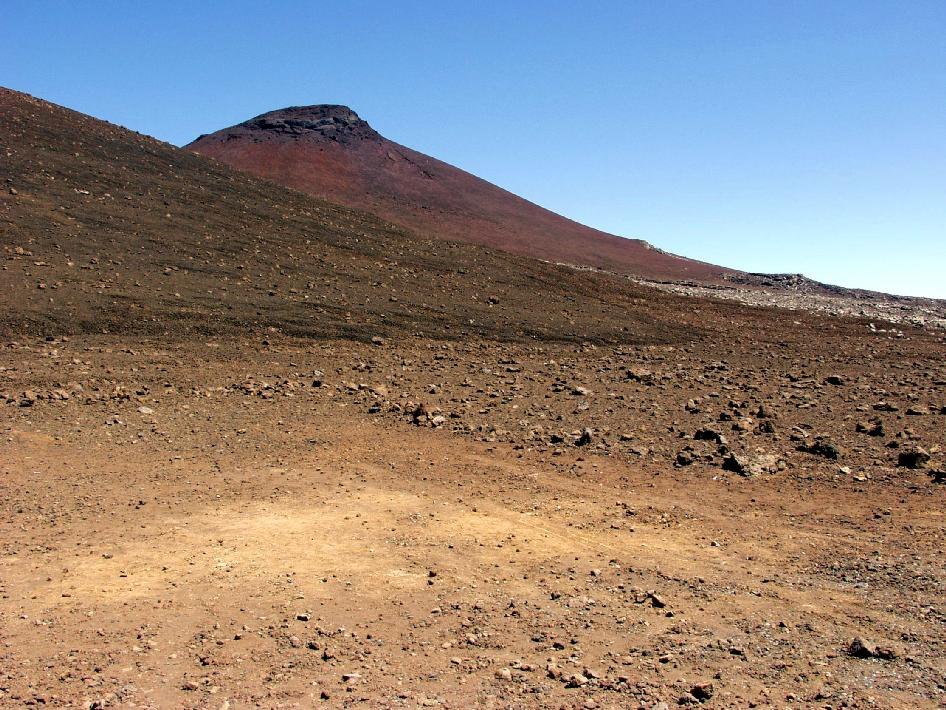 Besides, the main mineralogical studies, Curiosity did the routine work, such as taking pictures of panoramas, shooting the surrounding rocks and sand using the ChemCam laser.

Mars rover has been standing around the tongue of sand that is called Rocknest for more than three weeks. 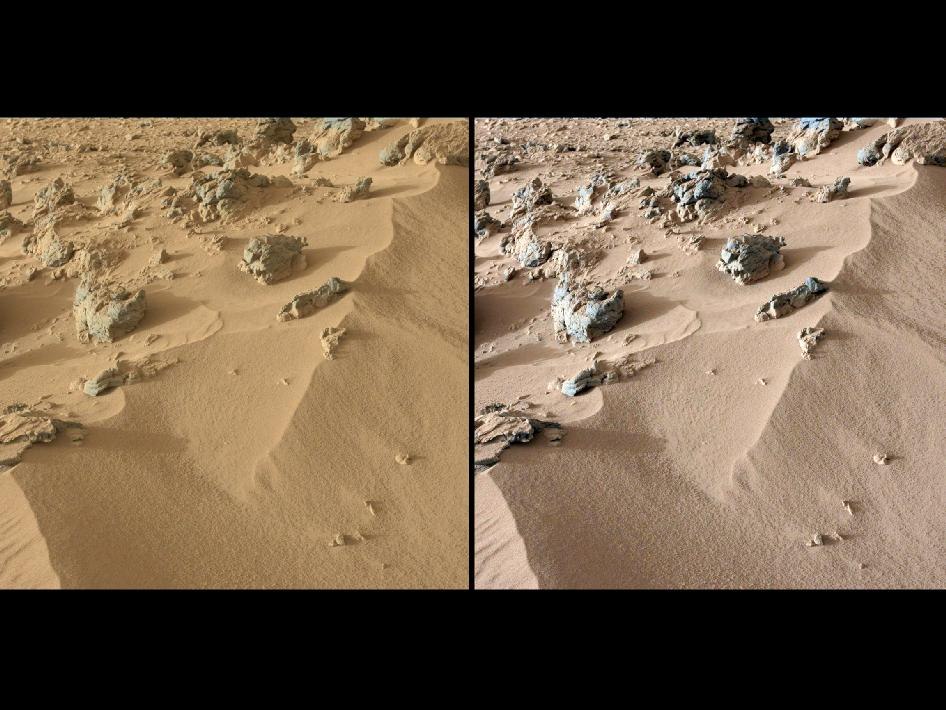 (On the left is original color, and on the right color balance is corrected by NASA)

For the time it spent there, it took a lot of panoramas using Mast Cam Right.
For example, here are Curiosity tracks.

This is the North-West view. 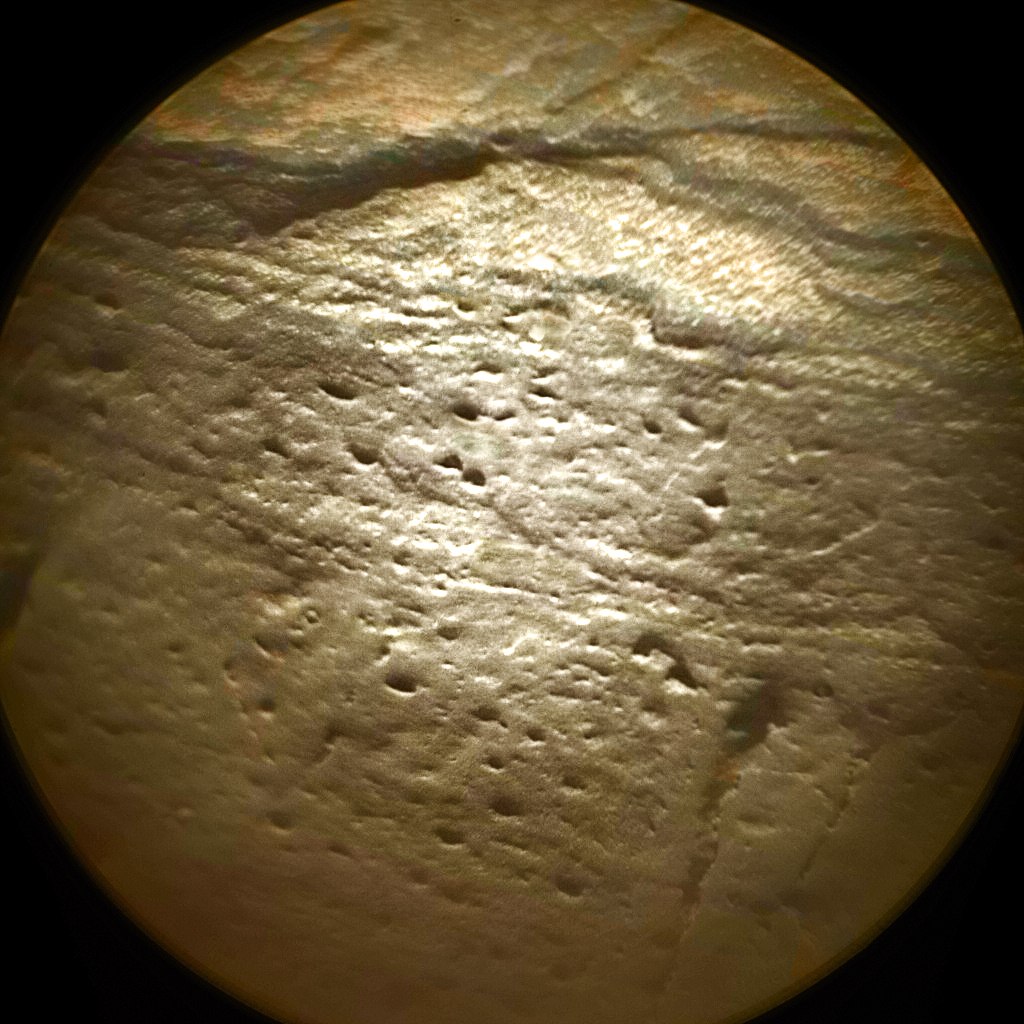 Once, it was very interested in the unusual stone. 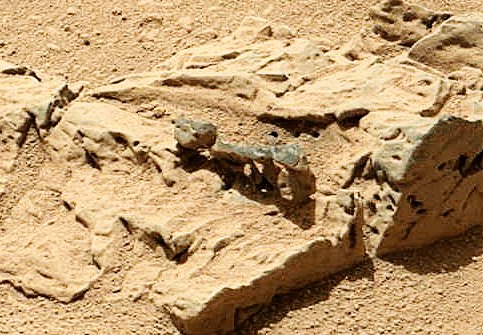 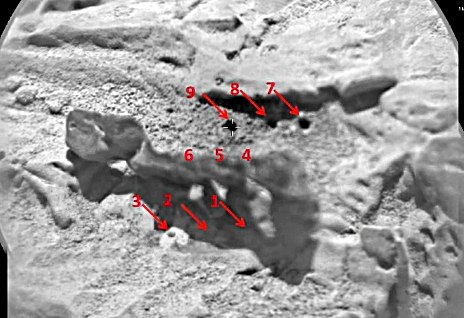 It used Mast Cam Right to take the picture of it through different color filters, so that helped to get highly detailed image. 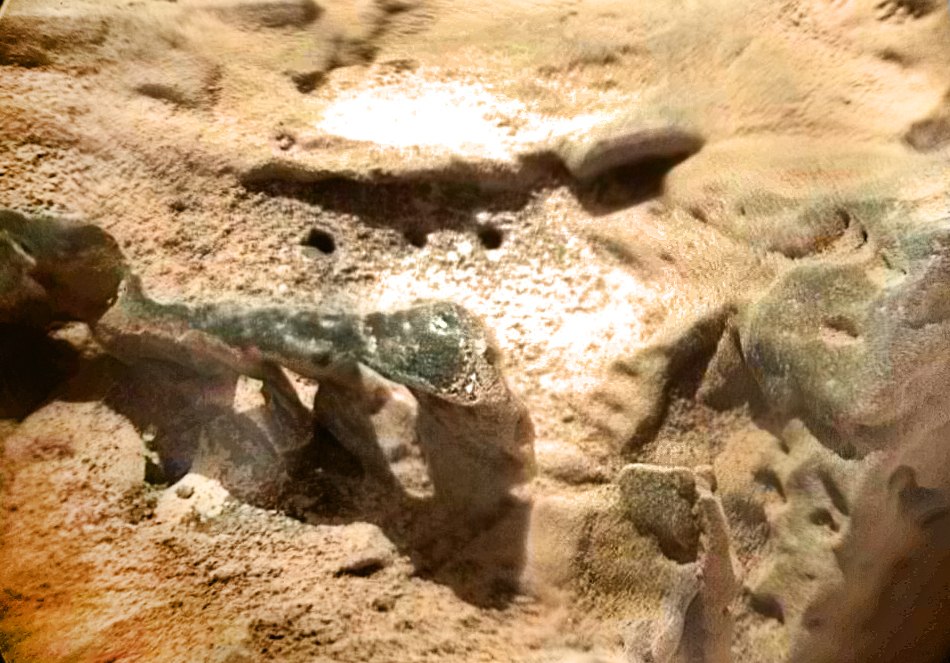 Curiosity did with it what it wanted to from the distance. By the way, this stone has the strange shape, and it looks like the giant ant. Perhaps, NASA just practiced to create three-dimensional models.

Although, they has not told us about the chemical structure of this rock. There are many quaint stones.
Tags: Curiosity, Mars, Mars rover
—