Can insects be used as spare parts? 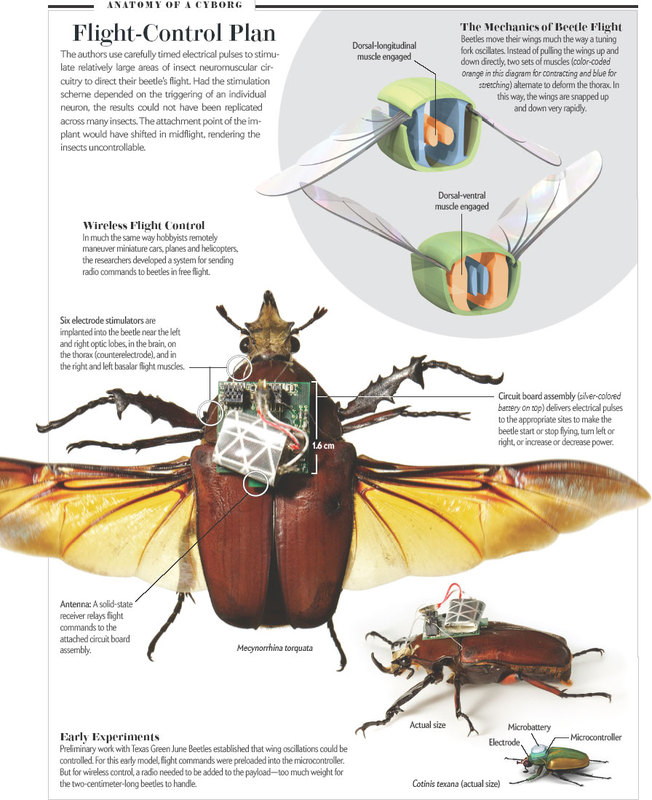 Let’s take a look at a caterpillar. At some point it turns into a butterfly. Here is a simple question, namely is it possible to give it the synthetic components that allow building a cyborg-insect? Answer would be yes it is. Michel Maharbiz, associate professor did it.

When this scientist from Berkeley has created the first cyborg-beetle, the military (DARPA) came to him right away and asked him if he is going to kill people, moreover, what would happen if his cyborg-beetle will run away and start wildly breed.

Maharbiz explained that he does not kill any people, and he does not plan to create the dangerous insects so far, furthermore, he does not afraid that they will breed, because cyborg-beetle was not programmed to do that. Also, he explained to the advocates of animal rights that the beetles are not tortured, and there were no complaints from them so far. On the other hand, it is true that now he is just considering the ethical aspects of using insects as the spare parts for the electronics, but this is not the case.


Maharbiz chose the beetles as the carriers. This choice is interesting, because the biological design of the beetle is that it contains something like the battery and can carry up to 20% more than its weight. Namely, the beetle has a reserve for the upgrades and features, in addition it has a battery which powers it for a long time and opens up some freedom of use.


The beetles are controlled by the certain resonant frequencies. Various muscle events cause different stimulation of the resonance of its shell, which activates the actions of other specific groups of muscles. We can give commands to the beetle by controlling its resonance.

Maharbiz put into the beetle some optical stimulants to its brain and the electro-stimulators in the core muscles. The first type of interaction is the work with the brain, namely start and finish vibrations. The second type is a stimulation of basal muscle on each side for turning. Roughly speaking, when beetle’s muscle is strained, the beetle fully understands that it has a turn and begins to do it.

Later the system was transformed into a micro-antenna, a microcontroller, which has a radio transmitter and a small microphone to listen to the vibrations to synchronize the wings (the beetle flies at a very complicated scheme, so it is extremely important). As a console hooked up Wi-Fi and began to play with the beetle.

The first thing that turned out is in the brain of the beetle is a place that gives 98% probability of correct execution of the command to "start" and "stop" a beetle. Depending on the biosystem signal of the beetle that adapts to flying position and get into a loop where it cannot stop until the signal stops. That thing helped to learn to control the beetle in two ways: "fly-land" and "turn right - turn left".

Considering that there are bugs that can carry 9-7 grams of useful load, it is understandable why the military got interest in Michel Maharbiz and the biology in general.


It is clear that the beetle, even upgraded to the cyborg status is not a robot, so it is really hard accurately to calibrate the system, because insect control errors are different. The fact is that each cyborg-beetle has its own balancing biological system and nervous system that formed up for generations to respond to different signals from the outside world. Beetles are different without the intermediate link in the chain of control, playing the role of synchronizer-calibrator, so it is extremely hard to get the same reaction.

There is another problem that results from the same nervous system, namely it is the low-level controlling that is affected by baseline levels of influence. Cyborg could get interested during a mission in a flower, a beetle of the opposite sex or something more interesting and important, and it immediately breaks its system of priorities. By the way, the beetle was not told about the scientists and the Pentagon, so tries to live on its own.


Then Maharbiz’s colleagues found a muscle-sclerite, which alone was responsible for the flight controlling. The insect was simulated by the special system, and it was managed to improve the accuracy of controlling at the level of the physiological impact, directing the thoughts of beetle. Now, scientists do not have enough feedback from the sensory systems for the precise control of the insect, but this is being solved.


Let’s make a player from it


Digital miniaturization is associated very closely with the biology. Biological systems are available in nature widely; in addition they are cheap and easy reproduced. Out there are a lot of organisms, and they can be reproduced to the desired stage. The result - now there can be used some of the insects as spare parts to a variety of techniques. For example, they already have a built-in gyroscope, a flying unit and the standard sensors.

Let’s imagine the situation, for example, in order to turn the insect into controlled platform costs about 33 dollars, and to build a base station to control it costs about 100 – 150 dollars. Using the insect could be fun at first, and then it could become the industry.

Let’s move on. We can start to produce a variety of strange things that will be a mixture of living and nonliving objects. Synthetic control networks and biological components are already a reality, though it is a little scary. And that's exactly what the Maharbiz now is doing in Berkeley. 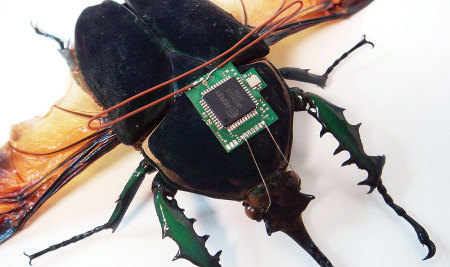 Perhaps, one of these is already flying behind you.


Now we get control under the neural systems


The cyber implant can be put into a pupa at a stage when it is formed (not too early - will die, and not too late - rejected). Japanese researchers have conducted studies on the implantation of microcontrollers in the head of insect. When this thing was growing, the controller became as a perfect controlling system. Media began to panic, but then the discovery did not have the practical sense.

After a year and a half at Berkeley was found a way to implant an interface into the butterfly through which the neurons passed to the eye. The hypothesis was tested, namely the perforated flexible polymer was implanted into the pupa, which gave a stunning union. The eye formed correctly, the neurons passed through the implant and this implant could read the data. In other words, the recording image technology was from the eye created.

The insect having this implant behaves normally and properly responds to the outside world, including among own kind. Now Maharbiz’s research group is recording the neural events and analyzing the data. It is planned to reduce the interface for the recording of more events. The dream is to collect all the data from the sensors of insect and to use them for automated controlling and other tasks.


The next breakthrough is a fuel cell in the insect. The scientists modified the glucose fuel cell and set it on the insect. Beetle feeds the glucose to the body, and this cell produces electricity for other cyborg systems of the beetle. The cell works for a few weeks and gives about 10-20 microwatts. In the long term, it will provide about 100 microwatts. It can provide even more energy, but it will be needed more advanced technology or more cells in the insect. Radio transmitters can already be built without much difficulty, but it is still expensive. 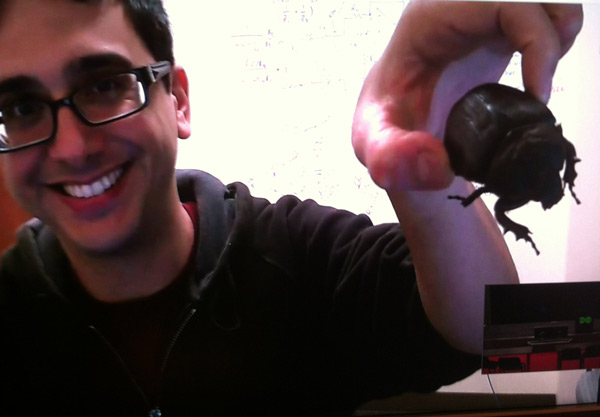 Michel Maharbiz sends greetings to UMumble from Berkeley. Now he shows the new beetle from Thailand, perhaps, he could build something useful from this one too.


1. Here is a recent lecture in the Digital October (there are a lot about the structure and nature of insects and biotechnological researches).
2. Here is about Michel on the website of Berkeley.
3. News about DARPA
4. There is a video about the cyborg beetle in the alpha test.

Finally, now in the lab of these wonderful people is going on the neural system project, which will result the dust. It will be applied to the skin in order to install an interface with a cell phone. Welcome to the future!
Tags: Berkeley, cyborg-beetles, implants, neural interface, neural systems
—