SARS-CoV-2 mutations: is everything bad or can you breathe out?


tldr: both, but for now everything is in our hands

The first thing to remember is that SARS-CoV-2 variants began to emerge from the very first days of the pandemic. To put it more, anyone who is infected with the coronavirus almost certainly serves as a laboratory for the production of many variants during the course of the disease. It's just that the vast majority of these options are less viable than the original ones that gave rise to them, so they will never make themselves felt. No sooner had we discovered them than they were already gone: and all because they do not have a reproductive advantage (or even obvious disadvantages) in comparison with the original. By the way, the situation is similar with the human body itself: the bulk of point mutations do not manifest themselves in any way, and of those that do appear, most make only worse, sometimes significantly. Beneficial mutations are rare.

Nevertheless, given the meager duration of the life cycle of viruses and their enormous ability to reproduce, beneficial mutations (or even their combination) have all the chances to arise and stand out rather quickly from their useless / harmful peers. This happened, for example, with variant B.1.1.7 (British strain), which overwhelmed competitors very quickly. To be fair, I note that it contains a number of changes compared to the "classic" coronavirus, which is why it emerged only after such a long time.

Maciej Boni (Associate Professor of Biology at Pennsylvania State University) talks about exactly this. right here ... The increased adaptability of the new variants appeared as a series of mutations appeared, superimposed on one another. Actually, here, right before our eyes, evolution is taking place at the molecular level! Incidentally, this is another strong argument in favor of the fact that the coronavirus has only recently spread from animals to humans: now it is faced with completely different factors of selection pressure and is developing in directions where neither bats, nor pangolins, nor anyone else. he hasn't been pushed yet.


Mutations under a microscope, or How it actually works

Just yesterday came out great article in Cell , in which B.1.1.7 is discussed in great detail. This variant, like B.1.351 (South African strain) and P.1 (Brazilian strain), is distinguished by several mutations at once, some of them affect the spike protein - including its main part, that is, the receptor binding domain (RBD) , which interacts with the ACE2 protein on the surface of human cells. The N501Y mutation is common to all three variants - a clear sign that it confers some kind of advantage in itself. It is difficult to imagine another reason why it was found in three variants with different sets of other mutations and in completely different parts of the world.

We will return to N501Y, for now, about where strains with multiple mutations come from. Any useful point mutation is akin to winning the genetic lottery, so a whole series of such mutations is like winning several lotteries at once. But, as I said, the virus is able to do this in just a few months (bacteria, by the way, too), because it multiplies very often and massively.

The most likely scenario for the accumulation of beneficial mutations is when the whole process takes place inside the body of one single patient with a severe and long-lasting coronavirus infection, which his immune system is unable to suppress. This the December report tells about just such a case: an unfortunate person with an immunodeficiency suffered from coronavirus for 154 days and eventually died from it and concomitant diseases. During this time, the virus that struck him was sequenced several times - its evolution in the face of a constant attack of the immune system, which, unfortunately, could not take over, was evident. 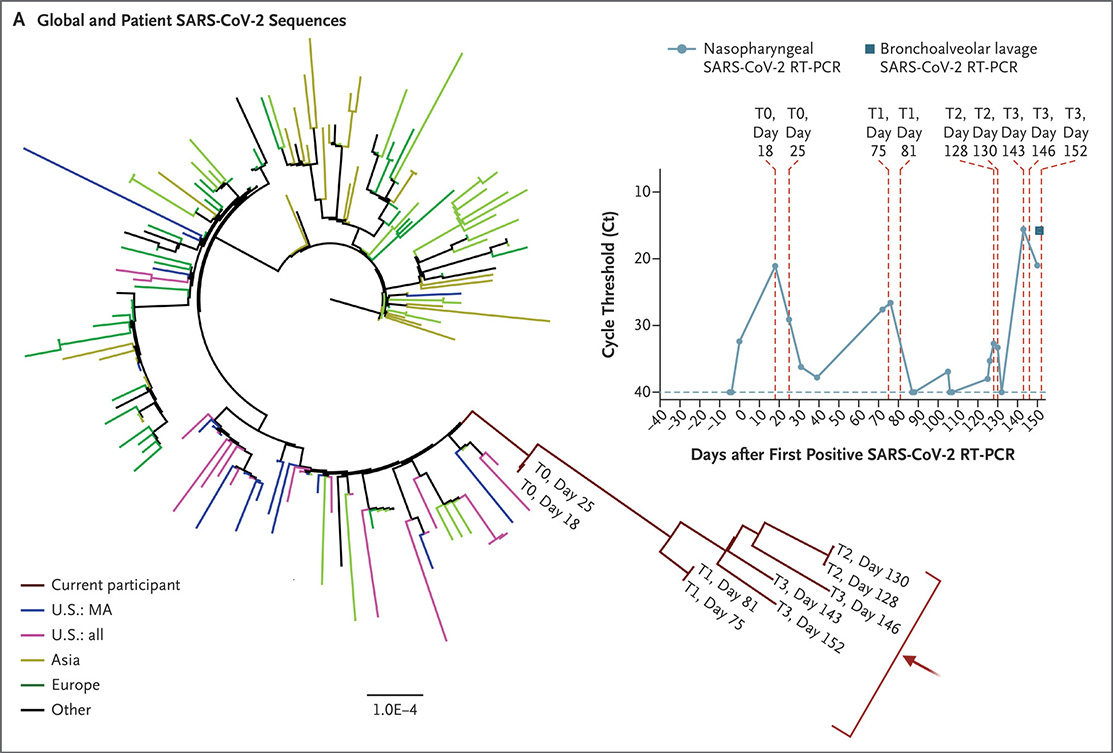 Red branch - patient's SARS-CoV-2 genomes by day; other branches - typical sequences in the state, country and world These are exactly the conditions that would need to be created in a laboratory if the goal was to obtain resistant forms of a virus or bacteria (and this is how they do it when researching the weak points of new antiviral drugs or antibiotics). It is plausible that variants with multiple mutations arise, at least in part, in cases similar to those described above.

If we talk about B.1.1.7, strains with the N501Y mutation (among others) appeared probably already last fall, but another mutation - a deletion at positions 69-70 in the spine - allowed B.1.1.7 to go even further , and now it is found in this form.

Mutation N501Y, Replacing Asparagine with Tyrosine By the way, what about N501Y? The picture above is taken from the same article in Cell and depicts the replacement of an asparagine to tyrosine residue at position 501 of the spike protein (i.e., the transition from N501 to Y501, hence the designation of the mutation N501Y). It turned out that tyrosine in the RBD of coronavirus is better able to bind to two side chains of amino acids of the human ACE2 receptor: tyrosine at position 41 and lysine at position 53. That's it, there is nowhere to go deeper into the description of this process - we are already at that level of approximation where medicinal chemistry works (or tries to work). All our achievements in improving the potency and selectivity of drugs, all the selection of promising candidates - in the end it all comes down to one side chain of one molecule, a functional group, and sometimes to individual atoms that "stick" a little better or a little worse to a certain protein. These tiny changes in the "stickiness" or dissociation rate of an antibody and an antigen, caused by the interaction with the π-electrons of the tyrosine ring and the polarity of its hydroxyl group - these are the things that affect the course of the pandemic.

A Minute Philosophy: We've just enlarged the image so much, if you will, that the pixels (or the grain of the film, if you are about my age) became visible. Molecular interactions like those described above are nothing more than "pixels" of medicinal chemistry and biochemistry in general. Every moment myriads of them are added together, giving in the end either a positive or negative effect. If you think about how they themselves are arranged, then you find yourself already in the world of quantum mechanics and individual electrons in individual atoms. And this is already a look at the pixels of reality itself. What a shock when, a hundred years ago, people began to understand that the universe really consists of particles, and this is equally true for both matter and energy, and in general they turned out to be two sides of the same (almost incomprehensible) essence. Remember from time to time that everything in the world, including pandemics, boils down to these things, if you look closely. Wah!

So, the advantage of N501Y probably lies not only in the fact that the virus begins to better bind to human cells, but also in the fact that it binds slightly worse to several types of antibodies that arose in response to a virus with asparagine in thorn, and not with some newfangled tyrosine. Favorable (for us) interactions with electrons around the side chain of asparagine disappeared after the substitution for tyrosine, and instead of them, it is quite possible that unfavorable ones appeared, which did not exist before (say, one electron cloud collides with another, and like charges are known to repel ). The Cell article demonstrates these changes for a wide range of antibodies. It is very likely that such a two-in-one strike (better binding to the target, the worst - to antibodies) was the key to the success of the N501Y mutation, which has become part of so many new strains.


So what's the bottom line?

In that article, there was the main good news: there are many neutralizing antibodies (both in the recovered and in the vaccinated), and not all of them were affected by the change. Despite the fact that the authors showed on the blood serum of recovered patients that, in general, the neutralizing ability is reduced, its reserve is more than enough. As the poet used to say: "Many are not, but many still remain" (but another poet and ours all said differently: "There are no others, but those are far away" - approx. Transl.). Many other laboratories have come to the same conclusion. It is directly noted that there is no evidence that the B.1.1.7 strain can bypass the protection given by the vaccine (we are talking about the AstraZeneca / Oxford vaccine, but the statement is true for everyone else).

But this does not mean at all that all future options will not be capable of this. Option B.1.351 is perhaps just a step in this direction. On the other hand, it may well be a dead end, that is, one that is unlikely to have new mutations useful (for the virus). This happens all the time. The number of all kinds of mutations is truly enormous, their effect on binding (both to the ACE2 target and to antibodies) is also uncalculable, but from the available observations and experiments in the field of molecular evolution it is known that dead ends on the path of the virus are much more common than exits from labyrinth.

The most important thing for us is not to experience in our own skin where this path will lead. Each sick person is another chance for the coronavirus to try their luck and embarrass themselves into something new. This is what options B.1.17, B.1.351 and P.1 are doing right now. Every second! And don't forget: these three are just the ones we know about. The Cell article calls the level of sequencing and variant surveillance around the world "completely inadequate." Alas, that's the way it is.

We are tired of the coronavirus winning everything in the evolutionary lottery. So stop (unprintable words) selling him so many tickets!

How do you stop doing this? And just follow the same sore-set recommendations: wear a mask, do not crowd in closed spaces and stuff like that. And also vaccinate people as soon as possible.

I am very, very happy that the number of new cases (and hospitalizations) in the US and many other regions is decreasing. This is due, apparently, to several factors at once. No one could predict such a sharp decline. If anyone tells you that he foresaw this, treat him with suspicion. Let him predict what will happen next, and we will see. But one way or another, the fact takes place. The more these numbers fall, the fewer lottery tickets the coronavirus will have and the higher our chances of winning with vaccines. It is high time for us, humanity, to take the lead in this race.
Tags: coronavirus, mutations, pandemic, vaccines
—