Post-apocalypse on a single island


There are many examples of a man-made nightmare created by man in the world. What is more amusing, the current example is revered today as an example of avaricious northern beauty, although a thousand years ago it could have claimed the status of “northern paradise”. What is this example?

The "extra" forests were the first to go for firewood - after all, the sheep need to be grazed somewhere. When firewood was not needed, the forest was simply burned. Then they began to cut down for the sake of wood, since the fin forest did not provide the island for it, and it was expensive to transport logs from the continent.

In general, already in the 1100s, the forest from commonplace turned into a rarity, areas with groves and thickets became an item of personal luxury, like silver or large herds. Ordinary settlers were rather sorry that wood itself had become an elite material. And then slowly but very inevitably came the "furry northern fox".

For a start, a couple of eruptions, finished off the forest. Attempts by some Icelanders to plant artificial groves buried themselves in the slow and reluctant growth of Icelandic birch, as well as a fresh thick layer of volcanic ash, which gave the already not very fertile soils a vigorous acidity.

Shrubs of alpine meadows are eaten by goats or put on brushwood. The thickets are no longer there, and nothing more protects against erosion. The fertile layer, which was very reluctant to build up all the time before the arrival of the restless Scandinavians, is washed away into the rivers under the spring flood and precipitation. The remainder is blown into the valleys by long winds. As a result, we get gray wastelands and desertification. People living there quickly, in just a hundred years, turn from wealthy farmers into beggars, exhausted by the constant risk of hunger (after all, there are fewer and fewer meadows, that is, less and less hay).

Let's go down from the mountains. The fallen and scorched forest, sprinkled with ash, raised the soil. Nothing grows on these new hills, since there is still no layer of fertile soil, the old one is hidden deep under the surface, and the new one ... see above. They still live here “poor but clean”, but another hundred or two years will pass, and the locals will catch up with the inhabitants of the foothill regions in chthonic horror. Let's go down to the plains? Spoiler - no better there. 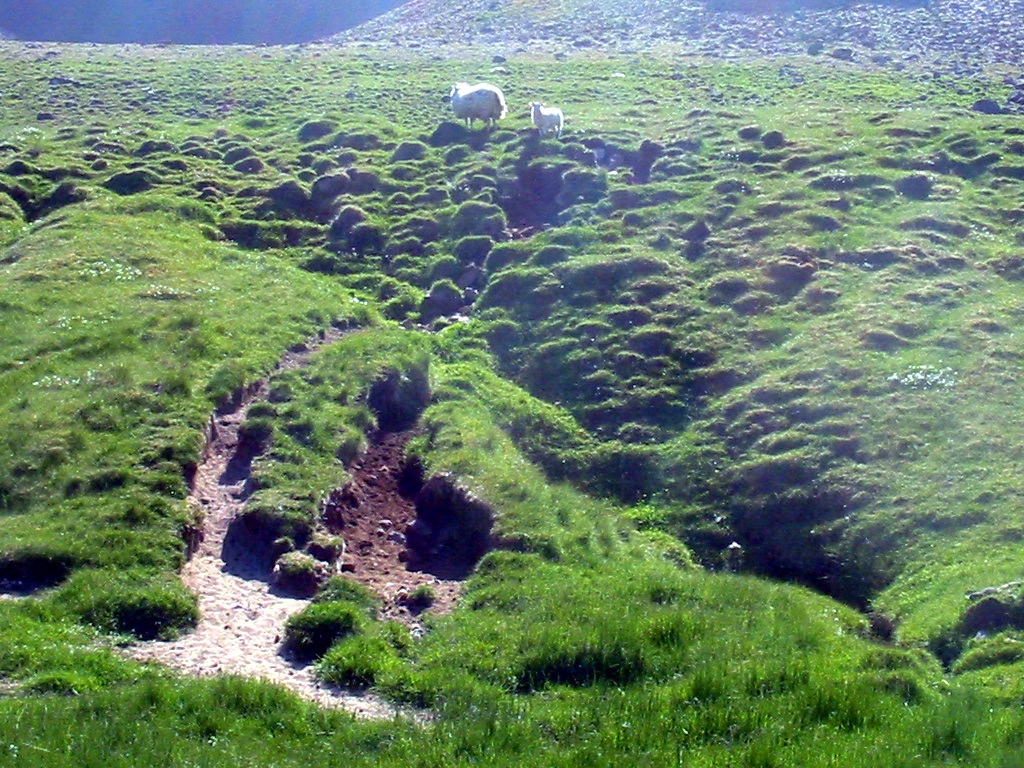 Typical plains landscape in Iceland today. The thin fertile layer is partially damaged by sediments, partially lifted by frozen groundwater and sediments. Yes, yes, that same pastoral Icelandic landscape is as much a sign of ecological disaster as the conditional "Red Forest", no matter how you compare them. The forests that once covered the vast plains between Selfoss, Reykjavik and the foothills are gone, and the climate is harsh. worsened. The settlers who still do not understand anything are dubbing from the piercing wind and frantically insulating houses with blocks of sod. Fertile soil creeps into the rivers in chunks, as there is no longer anything growing that can keep it on the slopes. The main layer of sod on the plains is saturated with moisture from rains and especially snow, in winter all this freezes and creates ice lenses, and in spring, pits are formed.

A “crop failure economy” is established on the island, a poor year with a slight hunger is normal and wonderful, because it can be a bad year when there is no hay, the fish is badly caught, and the cattle fell under the emission of sulfur gases and died. There are more and more bad years. The climatic optimum ends, the temperature drops from the then "+4 relative to average" to frosty "-4".

Lack of resources causes bitterness and dull irritation. Blood feud is no longer due to heavy insults, but because of the woods, the fact that someone looked askance, the pasture that they liked, and so on. During the fascinating massacre, the settlers did not notice how the “big gods” rose sharply from the godi (an informal position, standing somewhere in the middle between the authority, the leader and the judge), who spat on the established traditions of a fragile balance, and began to find out with a vengeance which of them are the largest Godi on the island.

King Haakon IV of Norway, who watched this from the continent with a medieval analogue of popcorn and read the works of one of the big gods, Snorri Sturlson, decides to take part in the fun and slowly crushes all the “big gods” by himself. Along the way, the royal assassins in 1241 slaughtered Snorri in his own bath (for he was too frenzied, not wanting to fall directly under the king). In some twenty-odd years, there will be no more independent rulers, and Iceland will join Norway.

"-Well, nothing, the main thing is that the mountains do not really spit fire, there, Hekla has been sleeping since the days of the forests" - this is how the Icelanders reasoned, looking at all this from the side and remembering 1100 and the eruption of Hekla.

Every ten years, volcanoes spiced up the bitter life of the settlers with another dose of ash and lava. But the main fun was on the way. The omen received in blood and ashes says: "If Hekla has not erupted for a long time, there will be trouble."

And you will not believe it, trouble has come.

1300 - Hekla erupts and the eruption is now ranked fourth (like Eyjafjallajökull in 2010). 30 thousand square kilometers are covered with 0.3 cubic kilometers of ash. Some farmsteads disappear from the face of the earth, fertile valleys have turned into gray wastelands. The cattle cannot graze - the ashes, even slightly covering the meadow, "poison" it, the cattle eating it spoils its teeth and gums and cannot eat normally. Sulfur dioxide, long before the Somme, arranges gas attacks, rising from cracks. People open the "NZ" - cut the cattle, eat lichen and algae, pray, go out to sea to fish (for Icelandic boats - a lottery a la Russian Lotto). Gradually, the richest ex-years are poorer to the level of an ordinary peasant, squeezed by Norwegian duties.

Ironically, it was at this moment that the swan song of medieval Icelandic culture happened. Most of the sagas that went only orally were recorded at this time, and one can only guess which masterpieces died along with the storytellers.

However, nature and the rather shameless policy of plundering their own possession by the Norwegians nevertheless took their toll. They crushed the last national heroes, imposed duties from above. The sagas began to be supplanted by "rims" - knightly ballads arranged in a local way. The tables were upholstered with pages of manuscripts, since all scholarship remained within the walls of the monasteries. Local handicrafts have withered away as foreigners and Norwegians flooded the market with (relatively) cheap guild products. 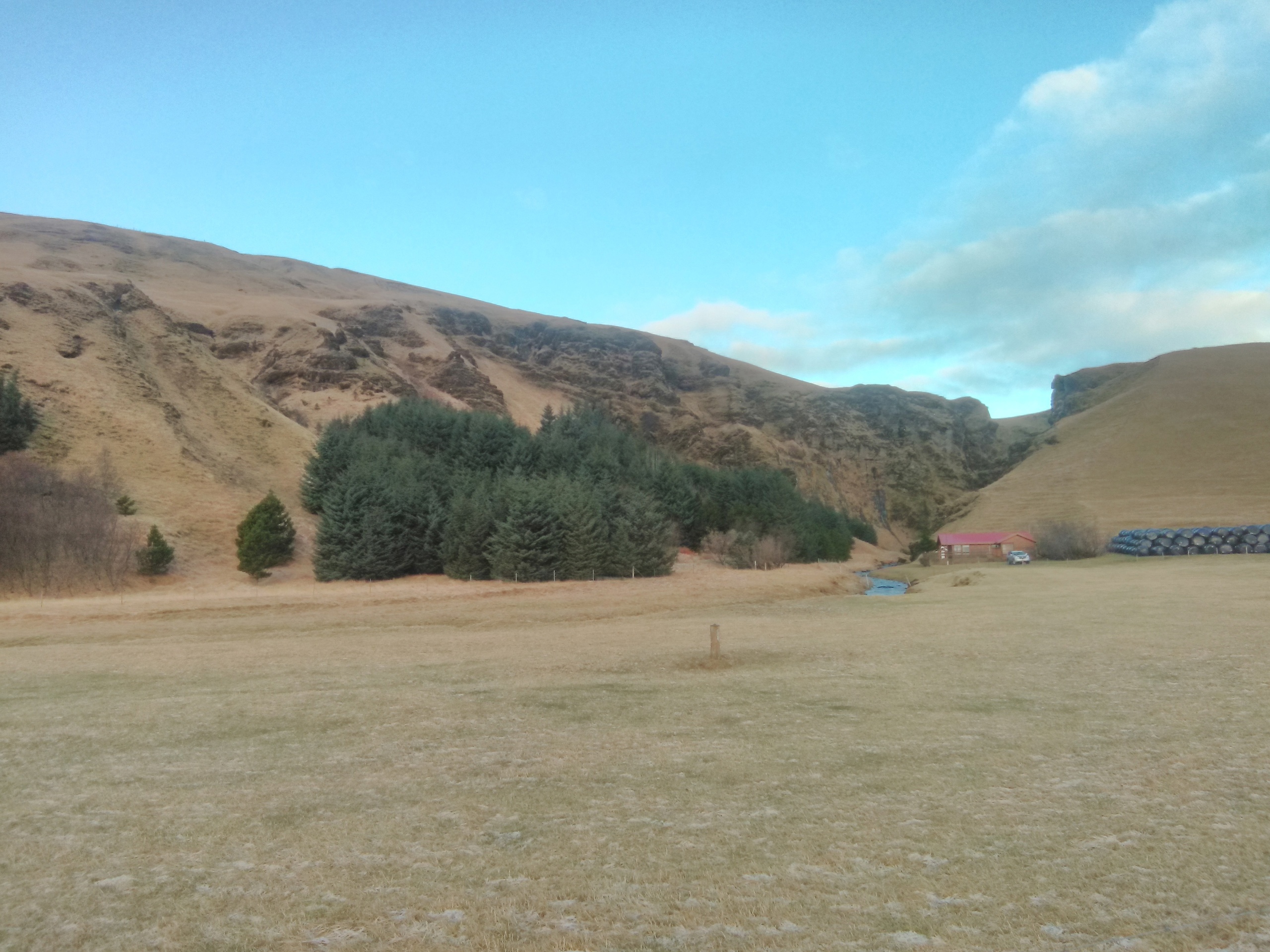 Newly planted forest in the twentieth century No more forests. Half of the island is not exactly trees - there is no more soil, only gray gravel, ash and sand. The south is devastated by another eruption in 1389. The waters are filled with foreign, mainly German and English fishermen, because “most Icelanders could not afford normal ships. Somewhere in this era, the last known Greenlandic settlers sailed to Iceland, the rest of the population died out, and it is still not really known how.

The island slowly plunged into poverty and darkness, from which it emerged only in the middle of the twentieth century. The rest of the time the word "Iceland" was synonymous with gloomy, impoverished and hopeless wilderness.
Tags: ecology, history, Iceland
—