Coronavirus miraculous: we analyze the hypothesis about the laboratory origin of SARS-CoV-2


Hello, Habr! It so happened that my colleague and I today published a scientific article in BioEssays magazine devoted to the analysis of conspiracy theory, which was originally formulated in the form of a post on Habré. It seemed logical to me to publish the analysis not only on my blog, but also here, especially since kind people invited me here.
In early February this year, WHO specialists who visited Wuhan said at a press conference that they exclude [1] the version of the artificial origin of the SARS-CoV-2 coronavirus. The virus probably came from bats through an unknown intermediate host.


But one conspiracy theory did not appear in the yellow media or in a private blog, but migrated from Habr [5] to the pages of a completely respectable scientific journal BioEssays [6]. An article by Rossana Segreto and Yuri Deigin said that the SARS-CoV-2 coronavirus "could have been synthesized by combining a genome similar to the RaTG13 coronavirus with the receptor-binding domain of a coronavirus similar to that found in pangolins." It is curious that Yuri (the author of this hypothesis, originally posted on Habr'e) is the first scientific article.

BioEssays today published a detailed analysis of the numerous errors found in this article, and an analysis of the evidence in favor of the natural origin of the SARS-CoV-2 coronavirus. We did this work with Alexander Tyshkovsky, senior researcher at the laboratory of systems biology of aging at Moscow State University named after M.V. Lomonosov and Harvard Medical School.

Let's analyze the problems of the article by Segreto and Deigin point by point.

1. Coronavirus RaTG13 from bats is the closest known relative of the SARS-CoV-2 coronavirus. However, there is only 96.2% similarity between the two viruses at the genome level. From these differences, an approximate estimate of the time of divergence of these coronaviruses follows - 1948-1982 (40-70 years ago). Even cultivation in the laboratory will not significantly speed up this process: for example, cultivation of the related SARS virus (SARS-CoV) for 30 days resulted in only 0.02% differences at the genome level. Therefore, it would have taken more than 15 years to create SARS-CoV-2 from RaTG13 in such an experiment.

One might argue that there are methods to accelerate the accumulation of mutations during the evolution of viruses in the laboratory. However, such methods leave traces: some mutations occur more often with this approach than in natural conditions. On the evolutionary path leading to SARS-CoV-2, we do not see such traces. On the contrary, nucleotide substitutions occurred at the same relative frequencies as in the evolutionary pathway of another natural coronavirus, SARS-CoV (Fig. 2). 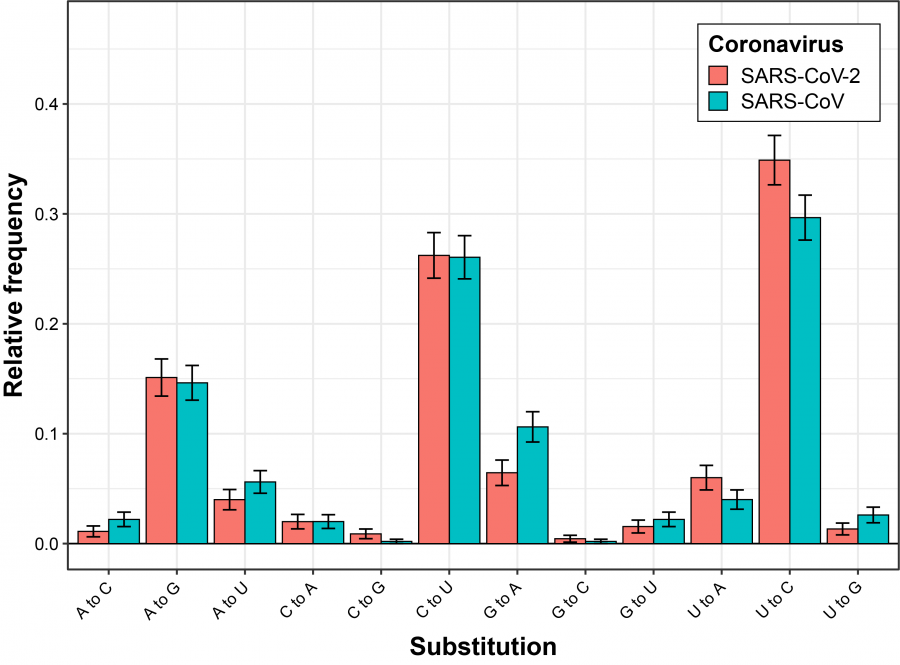 2. The receptor-binding domain of the coronavirus found in pangolins is also not suitable for the creation of the SARS-CoV-2 coronavirus. Segreto and Deigin write about the identity of this domain with that of SARS-CoV-2, but this is true only at the level of amino acid sequences. At the genetic level, the similarity between the RNA regions encoding these domains is only 86.6% (Fig. 3). This means that the accumulation of these differences would also take many years. Despite the fact that the coronavirus from pangolins was discovered only in 2019.

3. Insisting that the SARS-CoV-2 coronavirus is a product of combining a bat coronavirus and a pangolin coronavirus, Segreto and Deigin talk about a low probability of natural recombination, "given the low population density of pangolins and their low incidence of coronaviruses." For such a scenario, two coronaviruses should have hit one pangolin at the same time, which may seem unlikely. But almost all strains of coronaviruses that we see in pangolins are from bats. And the current pangolin coronavirus is no exception. Therefore, even if we were talking about the recombination of two coronaviruses, it could very well occur in bats, where viruses do it all the time. And after that, the resulting virus could get into the pangolin, and such a scenario no longer seems unlikely.

Finally, Segreto and Deigin do not even mention an article in the journal Nature Microbiology in which they studied the evolution of coronaviruses and concluded that SARS-CoV-2 is probably not a recombination product at all. Based on the spike protein gene, the raTG13 bat virus arose during recombination. So if we talk about some kind of artificial origin of the coronavirus, then rather this. True, it was opened a few years before SARS-CoV-2, so here the conspiracy theorists will fail.

4. Another argument of Segreto and Deigin lies in the discovered region of SARS-CoV-2 RNA, which can be cleaved by the FauI enzyme. Such enzymes are used by genetic engineers, and the cutting site is located inside the 12 nucleotide insert in the furin site, which plays an important role in the penetration of the virus into cells. It would seem that here it is - evidence hinting at an artificial origin. However, the fact is that genetic engineers know about thousands of such enzymes, and each of them recognizes its own nucleotide sequence. To show how easy it is to find a cleavage site for an enzyme in any region of interest in a gene, we used a simple NEBCutter program. We looked at how many potential "cleavage sites" could be found in the 500-nucleotide vicinity of the site being cut by FauI. There were 287 such sites, of which 180 were unique (examples can be seen in Fig. 4).

In other words, on average, every third nucleotide is cleaved by some kind of enzyme. The authors make a typical "Texas Shooter" mistake when they first "shoot" and then finish drawing the target. There were no a priori grounds for isolating the FauI site, and inside the discussed 12-nucleotide fragment, a cleavage site for some enzyme would almost certainly be found (I will omit the calculations, but the probability of this is about 99.5%).

These are not all the errors and incorrect assumptions in the article that we found, but some may turn out to be too complex for a popular presentation. It is worth noting only objections to related conspiracy theories, which Segreto and Deigin all hint at in the same article. The idea that SARS-CoV-2 is not made from the aforementioned known viruses of bats or pangolins, but from some unknown viruses carefully hidden in the Wuhan laboratory is not falsified (does not meet Popper's criterion, cannot be verified). Moreover, it loses in probability to the hypothesis of the recombination of two unknown viruses in nature due to fewer additional assumptions (Occam's razor principle).

In their article, Deigin and Segreto write in the same way that using the methods of modern synthetic biology, it would be possible to print absolutely any genome, including the SARS-CoV-2 genome, "leaving no trace." This, of course, is true, but it is not an argument, since any virus could be recreated with modern synthetic biology methods, and SARS-CoV-2 does not stand out here. With the same success, one could write an article on the laboratory origin of any of the causative agents of the common cold.

Psychologist Rob Brotherton has an excellent book: Distrustful Minds. What attracts us to conspiracy theories ”[8], which I never tire of recommending. It provides several interesting features of human thinking that push people to believe in unconfirmed conspiracies.

First, people have a "proportional error" - the expectation that big events must have big reasons. People find it hard to believe that the president of a powerful country was killed by an ordinary person, or that the closure of airports around the world was due to some pathetic random mutation. It is curious that conspiracy theories arise around the most dangerous viruses, but I have not come across, say, a theory that a secret laboratory is behind the creation of the herpes virus.

Secondly, people are characterized by teleological thinking - the idea that everything happens for some purpose. Previously, people animated nature, saw the anger of spirits or gods in earthquakes, thunder or a squall. Now these phenomena are understandable to people, but the causes of epidemics are baffling to many. And in them, in the same way, they are looking for a reasonable beginning. In this, conspiracy thinking is close to creationism [9].

Third, projections are peculiar to people - attempts to understand the thinking of other people by putting oneself in their place. In 2011, an article was published in the British Journal of Social Psychology that people who believe in conspiracy theories themselves would be more willing to take part in a conspiracy [10].

All this together gives us an information epidemic about how terrible scientists poison people with viruses, and then poison people again with vaccines in order to introduce chips to everyone and control humanity through 5G. And if effective vaccines against coronavirus have already been created, we can only dream of defeating conspiracy theories. But at least one should strive for it, especially on the pages of scientific journals.