In this article I want to tell you about the experience of developing one unpretentious game for Android, which has repeatedly paid off at the development stage!

In the courtyard was December 2015. The idea to create the game came absolutely suddenly: while dining in the school cafeteria during the change, we at ease absorbed the newly bought sausages in the test and, as usual, enthusiastically talked about the meaning of life, machine learning, and the rapid pace of development of AI. Gradually, our conversation touched on the theme of the development of mobile games. We talked about the complexity of creating popular games, their commercial benefits, and so on. And then we were visited by the daring idea of ​​creating our own game for Android. Quickly milking our lunch, we began to discuss this with great enthusiasm.

We began to sort through all the top games at that time: such as Flappy Bird, Crossy Road, etc., as they wanted to create something similar that would cause people to "get stuck" in our game.

Also, we both understood that there is a great chance not to finish the project to the end and simply throw its development somewhere in the middle, as it happens in the overwhelming majority of cases for novice developers. Therefore, it was decided to create something as simple and simple as possible, so that the development was the fastest.

After some thought, it was decided to choose the genre of the game "clicker". He bribed us with the seeming simplicity of development, although we realized that even at the time of the creation of the game, this genre is already morally outdated, and no commercial success could be expected.

After choosing a genre, the problem of choosing a topic arose. I do not remember why, but we decided to choose the "rocking" theme. Perhaps at the moment it looks funny, but at that time it seemed to us quite an original solution.

In general, our thoughts could no longer be stopped, and we, completely distracted by the conversation, were late for the floor of the lesson. And the same evening a project was created and the first line of code was written.

Over the title, we did not bother much and came up with it the same day. My inflamed mind gave such a strange phrase: "Pump it up." The fact that it is simply illiterate and contradicts all the norms of the Russian language, we learned only in the second year of the development of the game, but this name was so pampered, and it became so familiar that we did not want to alter it. So left as it is.

We understood that to do the usual clicker in 2015, even if it's not the case in unusual topics. And we decided that if you develop a game in this genre, you need to bring in it at least a few new and original game solutions.


We came up with 2 main features:

1) We decided to introduce such a game mode, as a joint game with a friend. The screen is divided into 2 parts and the player can compete with his friend at the speed of "Pressing on the dumbbell". It seemed to us a very good idea, because before that we had never met anywhere else. Also, this idea is good with the effect of "word of mouth", since the player can draw his friend into the game, and he also downloads our application. 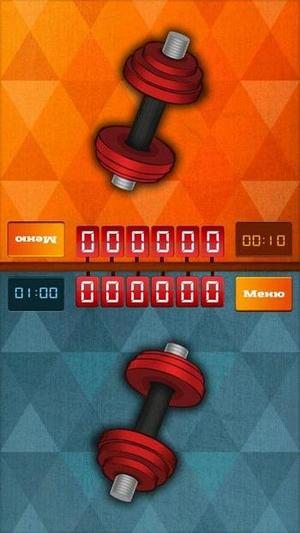 2) The second feature was the decision to introduce a model of pitching, the muscles of which will increase as they pass. The player's interest is to find out what will happen to him at the end of the game, to whom will he turn? This feature was designed to keep the player in the game and keep the application installed as long as possible on the phone. 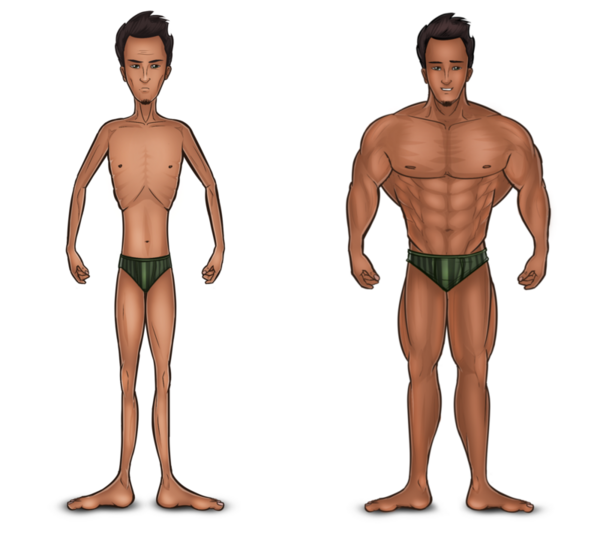 After the formation of the concept, the problem of game design arose - it simply was not there.
Without thinking for a long time, we decided to introduce familiar artists to our work, but, unfortunately, as we later realized - it was a disastrous idea. Due to the young age, our friends were not very experienced in the development of games and design, as they were our peers, whose skills left much to be desired.

After many unsuccessful design options for the game, we decided to hire a professional artist in freelancing. We chose a suitable designer for a long time, carefully looked through a huge number of profiles, read the reviews, and so on.

Finally, with a collegial decision we chose the artist we liked, with an impressive portfolio and vast experience. Without thinking twice, we decided to write to him.

It was a very exciting moment. We thought that this is our only chance to get a cool design, and we can not miss it. I twisted my dialogue in my head, thought through our communication to the five messages ahead. Finally, gathering strength, I sent him the first message. The answer did not take long. The artist replied in just half an hour.
In total, he did not want a lot of work for 5000-8000 $ ...

That day we came across the realities of this world. We did not have such money at all. The maximum that we could provide - was the amount of about 30 thousand rubles. This is all the money that we have accumulated from the breakfasts with zeal.

We immediately dropped our hands. We began to argue that the idea of ​​creating a game was stupid, they began to argue who even suggested to develop it. For about a week we walked in a depressed mood and practically did not talk about the game.

But, in the end, we decided to try again. After the second long search we found an artist who painted much easier, in a cartoon style, but she did not bite the price either.

We decided that we should take! For the whole design, we paid about 20 thousand rubles.
It was a heavy financial loss, but we coped with it.

The development of the entire design over time took about 2-3 weeks. In the end, he did not like to like us very much, but he was not bad. 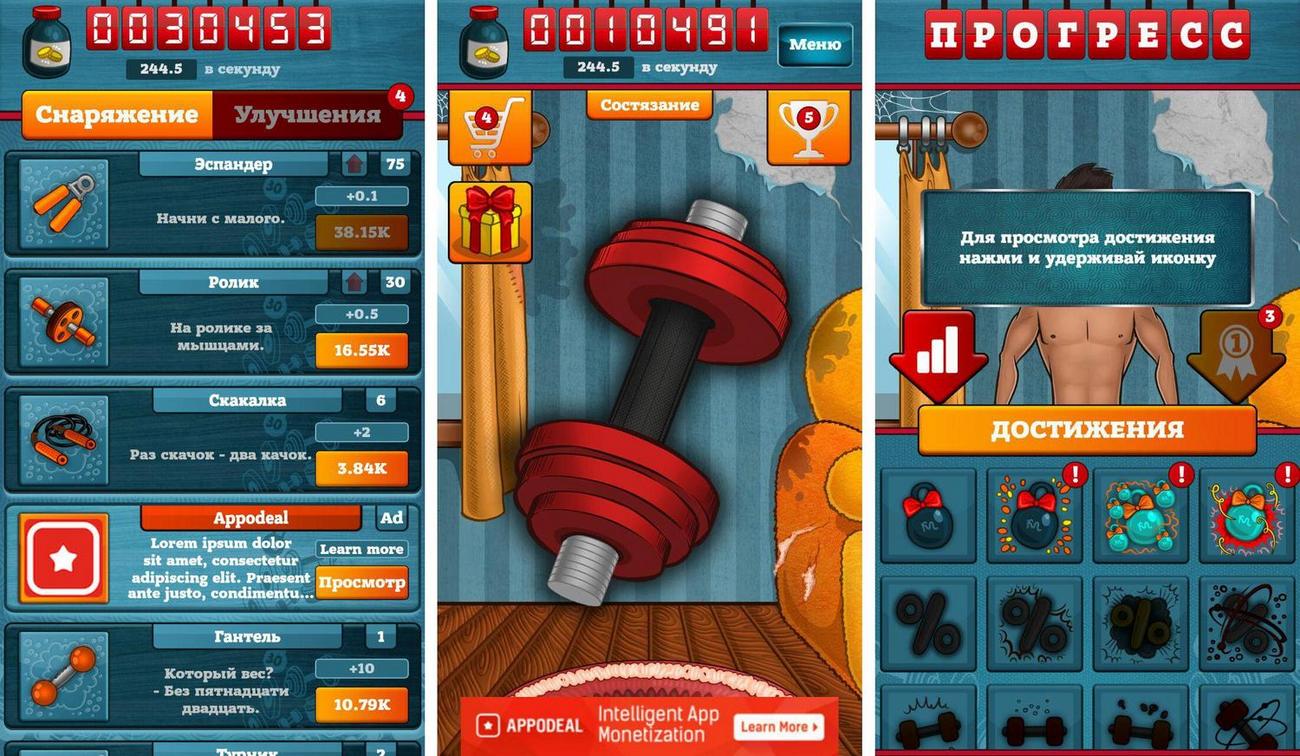 So, the design was ready! It's time to develop!

A lot can be said about the development. I will highlight only a few key points. Also, I will write about those surprises that we met, and what really struck us.

Total development took about two years. The game is written on native Android and consists of approximately 20,000 lines of code, not including libraries.

At the very beginning, there was nothing but this dumbbell to Activity. At the beginning of the development, the most complex was understanding the GUI, all these layouts, widgets and others like them ... Further, as the game developed, we learned about asynchrony in android, about advanced widgets, looked at a lot of different libraries and tried to figure out what in general there this is written, and how it works. After one year of communication with android we already had an idea of ​​the basics of development. The old code was gradually rewritten, since after the grown up skills he already seemed too crass and ill-conceived.

During the development of the game, we realized that we hurriedly ordered all the design at once - we had to redo everything very much ourselves, adjusting for interfaces, it took too much time.

In addition, as the game developed, the application very much gained weight, and we did not want to have to download about 50mb for this game, given that there would be half of the unused resources, and we began to deal with the sharing of resources on the device's dpi , to reduce the size of the final application.

Now we deliver 5 versions of the application to Google Play (4 versions with sharing resources and 1 version without partition), which saves some users about 18 megabytes of weight.

In general, the project, which we planned to complete in 3-4 months, was stretched out for such a long time.

After the game appeared at least some functionality, we began to think about ways to monetize. We tried many different companies-advertisers, including StartApp, ChartBoost and so on. But we decided to leave our choice on Appodeal, which seemed to us the most adequate network, despite the large size of the SDK and the need to use multidex.
Also I really liked the support work, the answers were always prompt and understandable.

Total advertising in the game quite a lot: from simple small banners on different activities to their full-screen views. Also, the game has video advertising, which the user can view if he wants to speed up the passage of the game.

Immediately after the introduction of the advertising network, the income from the game frankly saddened. He was no more than $ 0.1 per day, as there were very few views, due to the small number of players.

Over time, the schedule is very slow, but it has grown steadily upwards. For half a year the game began to bring about $ 1 a day.

Everything changed after we realized that the game has a terrible icon and a stupid description. We decided to change them. 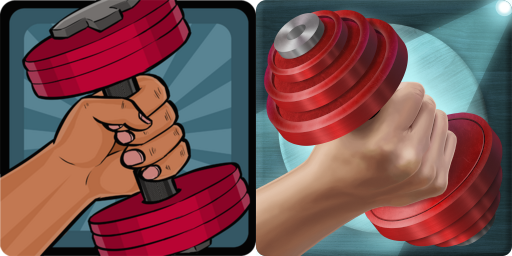 The number of user installations per day also jumped dramatically up:

With the assumption that it was the simplest clicker, and the development was very diligent, we realized our main mistake: we totally misjudged our strengths. I planned to finish development in 3-4 months, well, a maximum of 6, but it turned out that even after 2 years the game does not have all the features that we planned to introduce into it.

For myself, I realized that if you are planning to do a project and estimate the time that will go into development, then this result can be multiplied by 3 or even 4.

The second mistake was the lack of a clear plan of action.
Development was spontaneous enough, and many game solutions and chips were invented on the move, many moments in the game were reworked. Because of this, a large number of forces and energy went to waste. For ourselves, we endured the fact that before designing a game, you must make a detailed concept of what you want to see at the end.

At the time of writing, the game was released from the public beta in the release already as 3 days ago. So far, there is not enough public feedback, and we did not notice any special increase in uploads after the release of the game, but at the moment the game has got to the TOP of the new ones and is on the 280th place, although we have not given practically any advertising.

As a result, after the advertising campaign, we plan to increase revenue per day by at least 2 or even 3 times. But we are already happy by the ears, because even by current standards 120 thousand rubles a month for two, even the former schoolchildren, is very good.

With current prospects, we are now planning to create something truly worthwhile, something original and much more thoughtful!
Tags: android, game development, google play, indie, java
—