Fabrice Bellard: his biography and outstanding achievements as a super productive programmer


As the computer industry has the usual PCs and supercomputers, and also among the developers stand out giants that have superpower. How else can you call a man whose list of projects looks as follows:

Each of these programs could be the crowning career for any developer, but Fabrice Bellard continues to work. 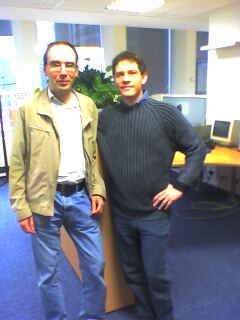 Of course, many successful programs are made on the inspiration of just a few days virtually without a sleep. But this does not mean that we can create a dozen of such successful programs. After all, each project must be supported in the future. For example, when Bellard in the age of 17 created LZEXE (the first popular wrapper of executable files for MS-DOS), he just gave the program to a few friends and uploaded on BBSes. Popularity came by itself and has become quite a surprise to the author. This is perhaps the only Bellard’s program, which did not require follow-up support. For other projects, he spent a lot of time to ensure functionality in a variety of platforms in order to give to the project and documentations such kind that its development would continue the other programmers. All this subsequent work requires more time than writing the original code.

Fabrice Bellard uniqueness is not in his excellent ideas (although there are a few developers like him), but in a truly incredible ability to implement these ideas in the form of ready-made programs that are useful to others. He constantly creates applications that are becoming popular and widely used by other programmers.

Let us take, for example: QEMU. Like all the other Bellard’s best-known programs, it spreads completely freely under the licensed GNU Public License (GPL), it originally created for Linux that ported to various platforms and now it entirely id supported by others. Before QEMU many emulators formally comply with the requirements of openness and universality, but Bellard’s development had a combination of performance, reliability and universality, which was unattainable for any competitor. Bellard’s merit was not that he came up with the idea of hardware emulating, but that he could embody it to the usual tools of the programmer and tester. Now QEMU is a truly indispensable tool for many programmers.

It seems Bellard found a balance between the extremes that interfere with productive work. Every few years, he explores new feilds: data compression, numerical methods, signal processing, media formats, but it keeps the same pure C, appropriate abstractions and loyalty to the open licenses. Bellard is not inclined to self- advertisement (for example, he politely refuses to give an interview), but the army of programmers and users widely use his products. For example, among of 654 guidelines on copyright in the source code of QEMU 0.13.0 only 216 belongs to him. In other words, he started the project so well that soon after its launch other programmers put into it twice more intellectual property than the author himself!

Fabrice Bellard was born in 1972 and, like many of us, got his first programming experience using the scientific calculator (it was a TI-59). Many of over mentioned projects are made within the framework of student projects while he was studying at the Polytechnic School in Paris, where he entered in 1990. Among the graduates of this famous institution are listed as Gaspard-Gustave de Coriolis, Jules Henri Poincaré and Benoit Mandelbrot. For example, even TinyGL that was released in 2002 originates from the 3D-engine VReng Virtual Reality Engine that Bellard started working in 1998.

His record of calculating the number Pi using a home computer surpassed the results of similar calculations on supercomputers; also it has roots in the childhood experiments with compact programs for the calculator.

Fabrice Bellard is a superhero of the programming. Its programs, such as QEMU, LZEXE and FFmpeg are used thousands of times a day around the world by many people, who have not heard even his name. But his "super force" is not like the characters have from the comics, it is not associated with supernormal abilities like flying or travel through time. Instead, there is much more important the discipline, confidence, accuracy and many years of practice.