(Some people might say that these stars have risen considering their recent campaign with Ralph Lauren and Juicy Couture, a photo-article in the New York Times and the appearance in Lucky Magazine, but we are confident that this is only the beginning.)

28 years old Beck and 30 years old Burg combine an unusual set of talents, which attracts not only the attention of Tumblr-community, but also a growing list of brands and editors.

Beck is a photographer, stylist and the main model of blog. She uses her skills of pin-up, makeup and hairstyles creation, as well as vintage clothes for the glamorous images of such American icons as Audrey Hepburn and Grace Kelly.

Burg more is engaged in the technical aspects and he creates a blog’s design, especially cinemagraphs – the animated GIF-images that look like moving pictures. In addition, he is engaged in the business relations noting the wishes of clients and deadlines.

They met in 2006 through mutual friends and already are engaged. Before they began working together earlier this year, Beck says that since she was 13 years old photography is her life, she has been taking pictures of everything. Burg persuaded her to buy a digital camera and to start leading a blog and Twitter, and recently to upload her pictures that were taken on the iPhone in Instagram. (She admits “I am obsessed".) He also designed her Tumblr.

Burg took footages from the TV show "Saturday Night Live" for some time and he transformed the elements into cyclic animations on a stationary background. They became the prototypes of their first cinemagraph "Tentacles" that was published in February 13, 2011.

First sinemagraph of Beck and Burg was called "Tentacles" and was published in February 13, 2011.

Beck remembers that after the publication of their first sinemagraphs nobody else wanted to order her photos. All asked her to do "this moving thing”, that is when they decided to come up with the name "sinemagraphs". They felt that they needed a new name, because what they created was not an animated GIF.

Beck says, "they have a cinematic quality ... like a living picture. It is always a picture in the first place”.

How do they create sinemagraph?

Beck and Burg never know for sure if it will come out as sinemagraph, which creates difficulties when brands make their order. Beck says, "We can be assured for 90%". "If we are shooting in the street or at Fashion Week, and I cannot control the environment, there are no guarantees."

In order to create the sinemagraph Burg and Beck focuse on the animation of one object, for example: swaying chain or a spoon that moves along the edge of a cup of coffee. While shooting in the studio a duet can use the point sources of light to create brilliance and hairdryers to blow the hair and clothing. Beck directs the camera Canon 5D Mark II while Burg creates the animation.

Then Beck and Burg import the files and edit them in Adobe Photoshop and After Effects. The number of frames that they use depends on the environment. They created very long cycles and pasted the made work using HTML5-video layers for a website Gilt Taste. In sinemagraph for their Tumblr eventually will be 25 to 100 frames and in banner’s ads even less.

According to Burg shooting sinemagraph roughly takes no more time, than shooting photos, but the editing process usually takes a day.

Beck and Burg dissatisfied with the limits of connection speed and file size that makes them to use GIF-files, which lowers the quality. Beck hopes that next year they will be able to create sinemagraphs that would look so realistic that you could touch them. 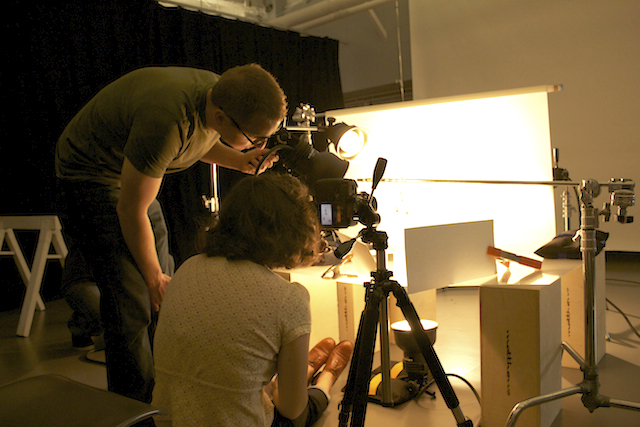 The test shooting for Juicy Couture in August

An additional advantage of the audience

Sinemagraph that is ordered by Juicy Couture

Beck and Burg are attractive for brands not only because of their photos and sinemagraphs. They also gained a significant audience of their own, their series of six sinemagraphs with Coco Rocha model in dresses from Oscar de la Renta received 55 000 reBlogs, and more than 2 million "impressions", as told a fashion’s director of Tumblr Rich Tong at a conference in Paris earlier this month. This effect makes the duet as a valuable tool for the distribution.

Let us take the recent campaign of Beck and Burg for the fashion brand of Juicy Couture. They ordered the creation of a series of sinemagraphs using the products of Juicy Couture, some of which appeared as the banners on a number of websites about the fashion, and some like the above appeared only in their own Tumblr, which received over 15 thousand reBlogs for each.

Robinovich says, "Jamie and Kevin are remarkable, because they are not only the artists - they also have a portal for the distribution. Why would you hire just the photographer if you can hire a photographer who has a place for sharing photos ... [and] a hungry audience?”.

Robinovich’s question was a rhetorical, but it makes you wonder.

Scott Schuman who is a photographer for the blog of Sartorialist on the street style in a recent interview said that he earns about a quarter to half of million dollars a year on advertising in his blog in addition to other wages. Will there be opportunities for photographers without the blogs and presence online? Will the coverage be a routine part of contracts in the blog?

Beck says, she had never coordinated the blog’s coverage in her contracts directly, but it was discussed with the brands, namely when and what can be published. The brands do not control what happens in Tumblr, and she cautiously agrees only to proposals that do not contradict her principles.

Beck explains, "If I am going to work with someone, then it should be part of my life – something that I would like to share. I could be hired to create a banner, but I want people to see all 360, and I hope that my readers will be surprised and inspired".
Tags: fashion, photography, sinemagraphs
—