The following is a list of common diode types and symbols: 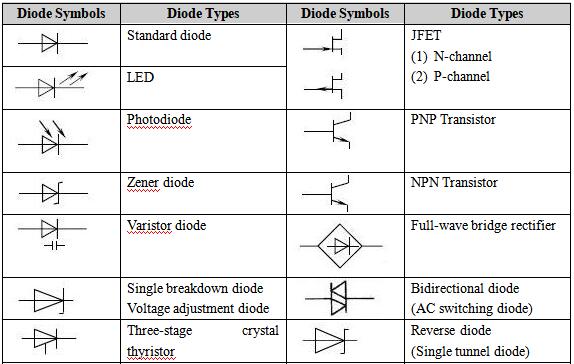 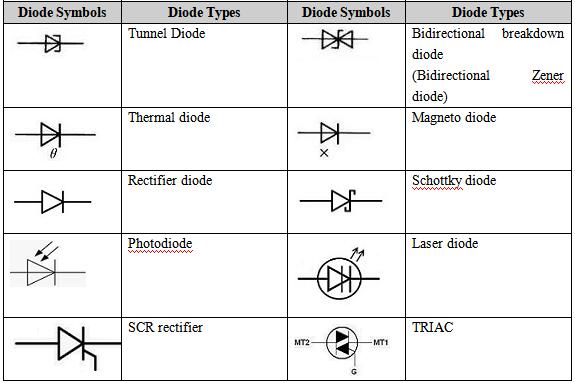 Light-emitting diodes (LED) are commonly used light-emitting devices that emit energy through the recombination of electrons and holes to emit light. They are widely used in the field of lighting. LED can efficiently convert electrical energy into light energy, and have a wide range of uses in modern society, such as lighting, flat panel displays, and medical devices.

Zener diode uses its PN junction reverse breakdown state, its current can be changed in a wide range while the voltage is basically unchanged. It is mainly used as a voltage regulator or voltage reference component.

Bridge rectifier is the most commonly used device for rectification using its unique unidirectional conductivity, and is often used to convert alternating current to direct current.
A tunnel diode or Esaki diode that can be switched at a high speed, which can reach the range of microwave frequencies. The principle is to use the quantum mechanical effect. It is a crystal diode with tunnel effect current as the main current component.

Switching diodes are a type of semiconductor diodes, which are specially designed and manufactured for "on" and "off" on the circuit. The turn-on time required for it is shorter than that of ordinary diodes. The common series are 2AK, 2DK and others, which are mainly used in electronic computers, pulse and switch circuits.

The rectifier diode is a semiconductor device that converts AC power into DC power. Usually it contains a PN junction with two terminals, anode and cathode, and is a vital component in power supplies where they are used to convert AC voltage to DC voltage.

The Schottky diode, also called Schottky barrier diode or hot-carrier diode, are used for their low turn-on voltage, fast recovery time and low-loss energy at higher frequencies. When it is in unbiased condition, the electrons lying on the semiconductor side have a very low energy level compared to the electrons present in the metal.