What is a sensor?
Humans understand the world through various sensory systems, such as touch, smell and taste, and so on. Through our vision, we know that it is an orange carrot with a green cap; through the sense of taste, we can taste the taste of carrot silk.
The sensor is the sense of touch, smell and taste of an object. It is a device or device that allows an object to feel the signal being measured and can convert this input signal into an output signal according to a certain rule. Suppose the robot is beaten, and the pressure is the input signal. The sensor changes it to a signal that the head can understand according to its own rules, and the head will respond when it receives the output signal.
More detail...
Tags: electronic, equipment, sensor
—

When measuring the speed (frequency), digital circuits are currently used, but in some occasions, the change of the speed (frequency) is required to correspond to the analog signal output, so that the frequency/voltage conversion device can be used in the automatic control system experiment to replace the speed measurement and power generation. Machine, thus simplifying the experimental equipment. The speed (frequency)/voltage conversion chip LM2907/LM2917 introduced by National Semiconductor Corporation can form an analog tachometer with only a few peripheral components, which can be used to measure the motor speed and realize car overspeed alarms.

LM2907 chip introduction
LM2907 is an integrated frequency/voltage converter. The chip includes a comparator, charge pump, and high-gain operational amplifier, which can convert frequency signals into DC voltage signals. LM2917 is basically the same as LM2907, the difference is: There is a voltage regulator tube inside LM2917, which is used to improve the stability of the power supply.

Main features
LM2917 only needs to use an RC network when multiplying the frequency; the tachometer (frequency) input with the ground reference point can be directly connected from the input pin; the operational amplifier/comparator adopts a floating transistor output; the maximum output current of 50mA can be driven Switch tubes, light-emitting diodes, etc.; the included tachometer uses charge pump technology, which has a frequency multiplication function for low ripple; the hysteresis voltage of the comparator is 30mV. This feature can suppress external interference; the output voltage is proportional to the input frequency, linear The typical value is ±0.3%; with a protection circuit, it will not be damaged by the input signal higher than the Vcc value or lower than the ground reference point; when the input frequency is zero, the output voltage of the LM2907 can be adjusted according to the peripheral circuit; when the input frequency When reaching or exceeding a given value, the output can be used to drive loads such as relays and indicator lights.

Pin arrangement and internal structure
LM2907/LM2917 are available in DIP8 and DIP14 packages. The internal structure of DIP14 of LM2907 is shown as in Fig. 1, the internal structure of DIP8 and each pin function can refer to Fig. 2. The functions of each pin are as follows:
●Pin 1 (F) and pin 11 (IN-) are the input terminals of operational amplifier/comparator;
●Pin 2 is connected to the timing capacitor (C1) of the charge pump;
● Pin 3 is connected to the output resistance of the charge pump and the integrating capacitor (R1/C2);
●4 feet (IN+) and 10 feet (UF1) are the input terminals of the operational amplifier;
●Pin 5 is the emitter of the output transistor (U0);
● Pin 8 is the collector of the output transistor, generally connected to the power supply (UC);
● Pin 9 is the positive power supply terminal (VCC);
●12 feet are the ground terminal (GND);
●6, 7, 13, 14 feet are not used.

The output circuit accurately sends this current to the load resistance (output resistance) R1, and the other end of the R1 resistance is grounded, so that the filtered current is integrated by the filter capacitor to obtain the output voltage:
Vo=VccfINC1R1K
Among them K is the gain constant, the typical value is 1. The value of capacitor C2 depends on the size of the ripple voltage and the response time required in actual applications.
Tags: converter, electronic, LM2907
—

The variable resistor is mainly used for adjusting resistance values, and often applied in the voltage divider biasing circuit of the transistor. The following talks about its function and features: 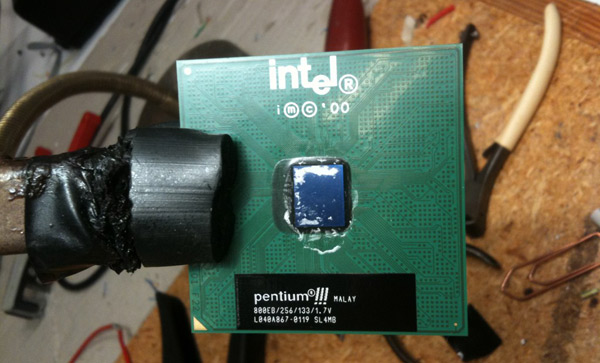 All photos are clickable and available in high definition.
More detail...
Tags: autopsy of processor, Pentium III, processor under microscope
0

BumBum Write a note to your spouse every day
Masyk How fast is 12th Gen Intel Core?
BumBum A biochemist’s view of life’s origin reframes cancer and aging
Skull Man arrested for promoting jury nullification wins federal case
Enyman Is Google.com Down?
Skull The Reluctant Prophet of Effective Altruism
Killer MantaRay: Open-Source Ray Tracer
ZimerMan The case against an alternative to C
xially Malcolm Gladwell opposes WFH while he works from his couch for the last 20 years
Skull The productivity tax you pay for context switching
All in live
© 2011-2022 UMumble. All Rights Reserved.