BIM: how we build builders at the construction site


According to our rough estimate, based on 20 years of practice, earthwork can "lose" up to 50-60% of the budget. On reinforced concrete and finishing is exactly 30%. On the errors of re-registration in collisions, the cost of engineering increases by approximately 10%. It is for this simple reason, when the "evil customer" implements the BIM-model of the building, wild cries and groans begin on all sides.

Here is the main view: here you can see the model of the building without rendering, just at the level of engineering schemes. In the open window now on the center - a building for inspection, in the background are visible cuts for specific systems. 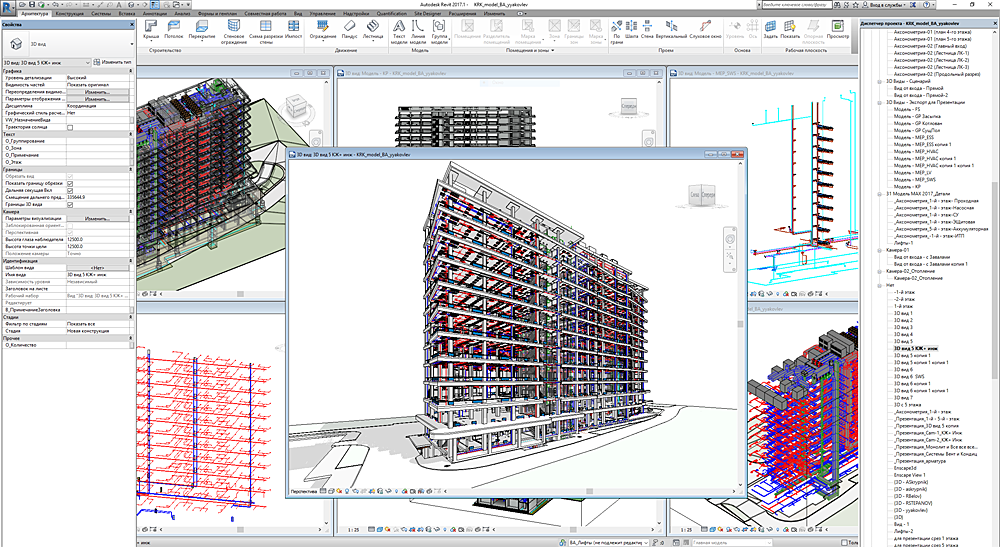 This is how all the engineering systems of the building look "in the assembly". 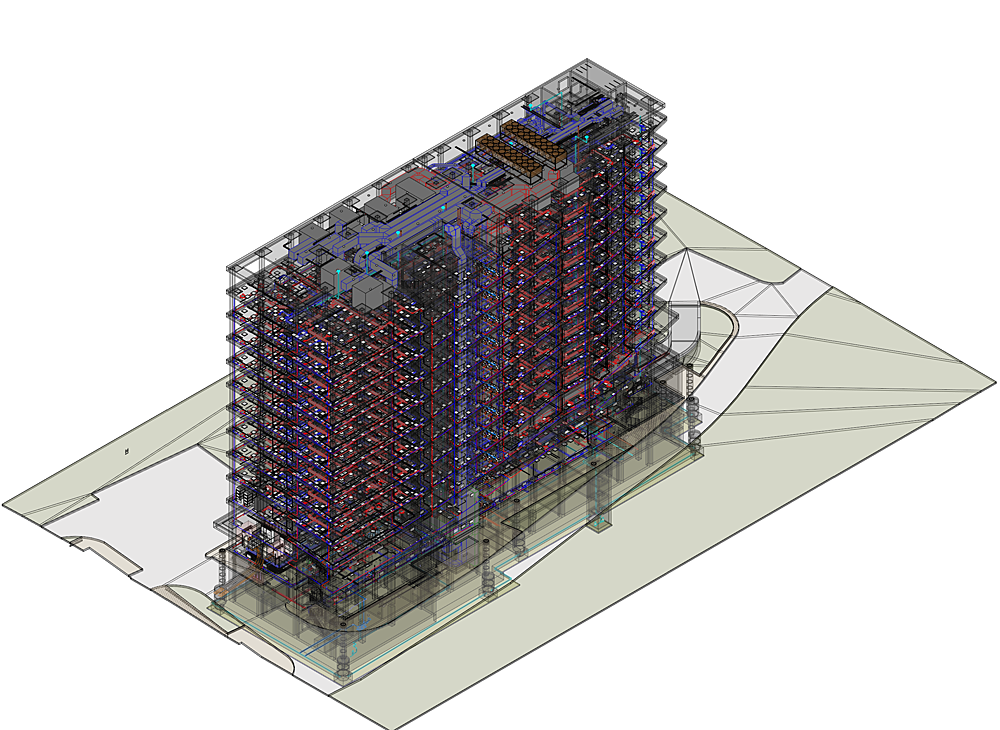 You can disable the consistent look and see only specific subsystems. For example, this one is water supply. 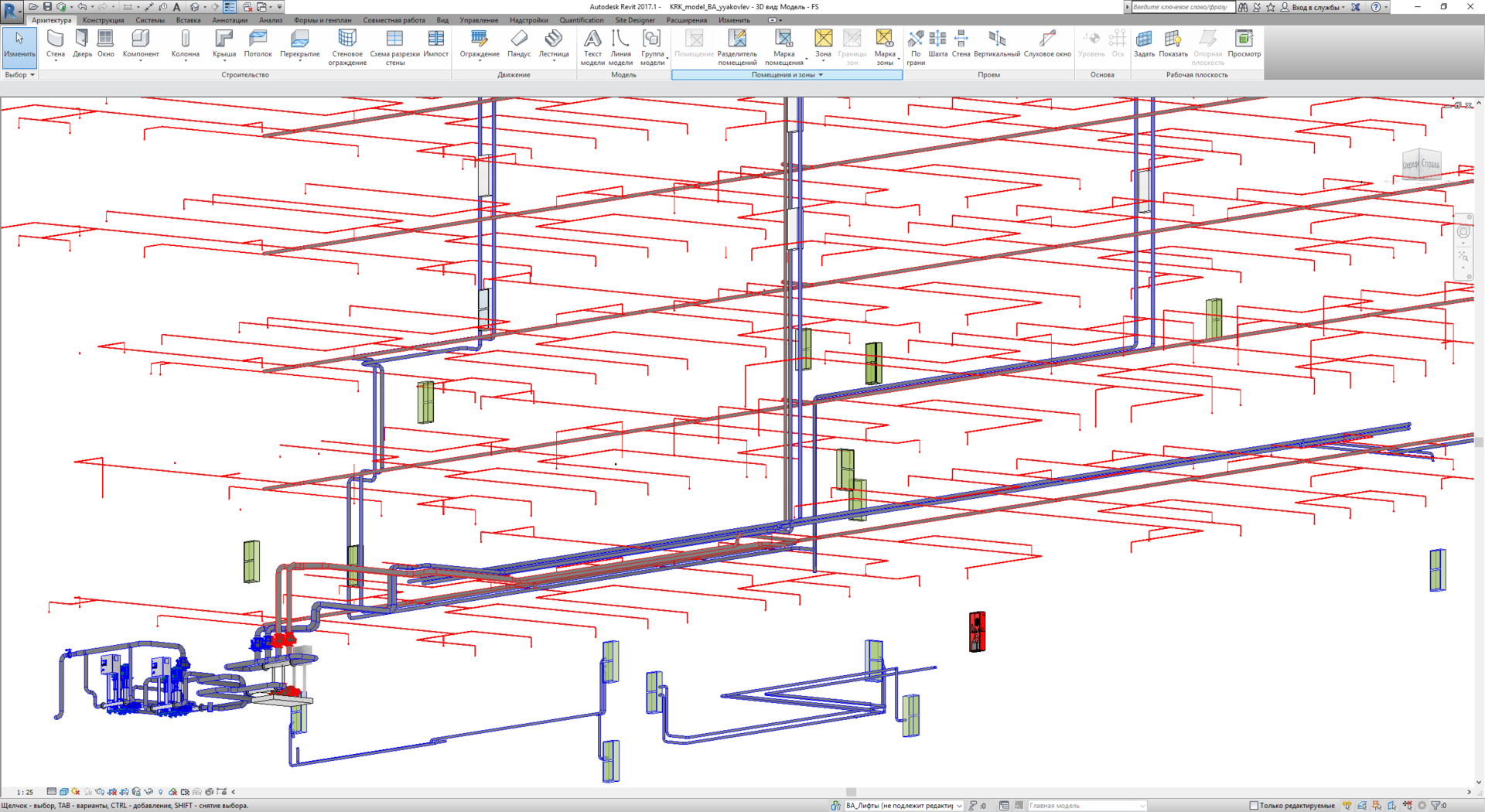 And this is an electrician. 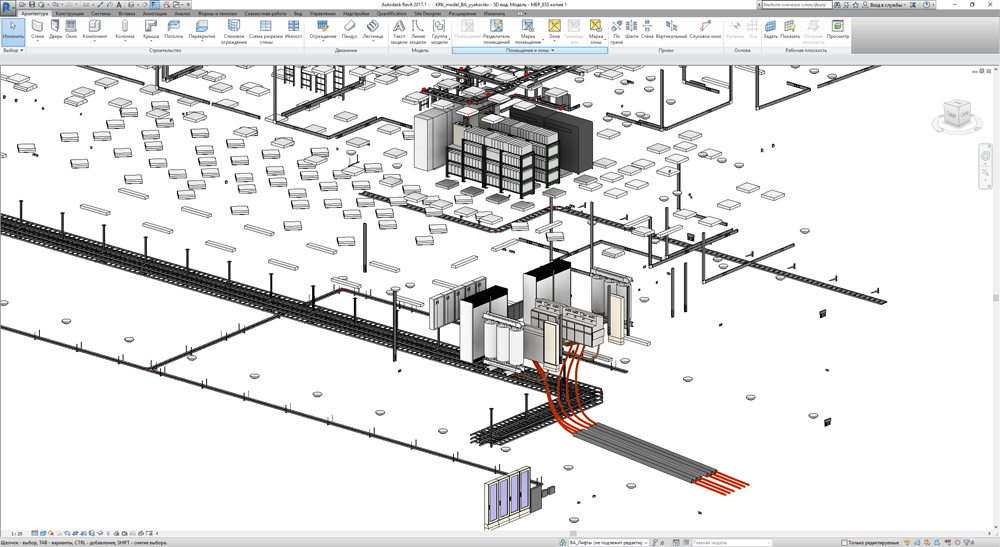 You can twist and enlarge the area of ​​interest. 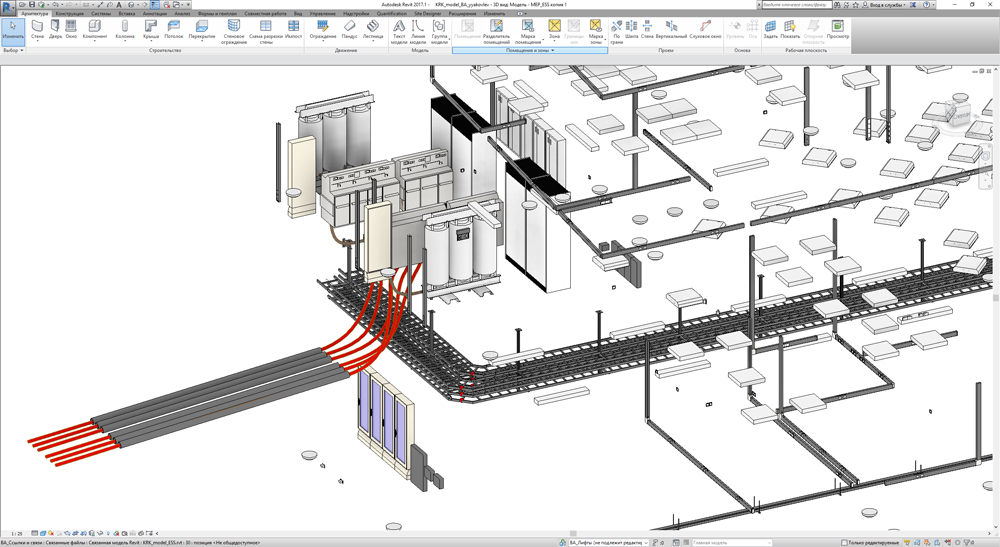 Switch to the view of another system. 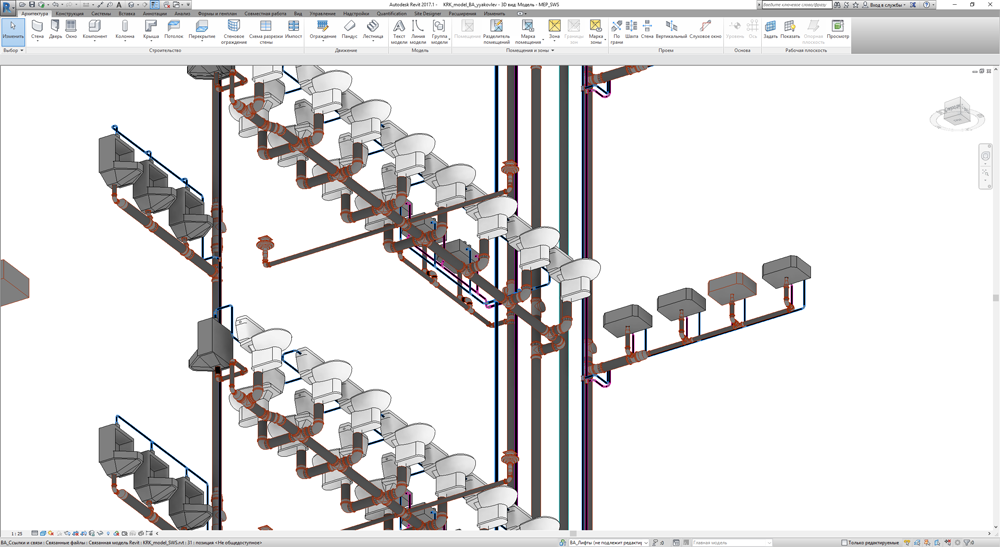 View the individual nodes as "bricks", that is, objects (they are then conveniently duplicated in the designer, for example). 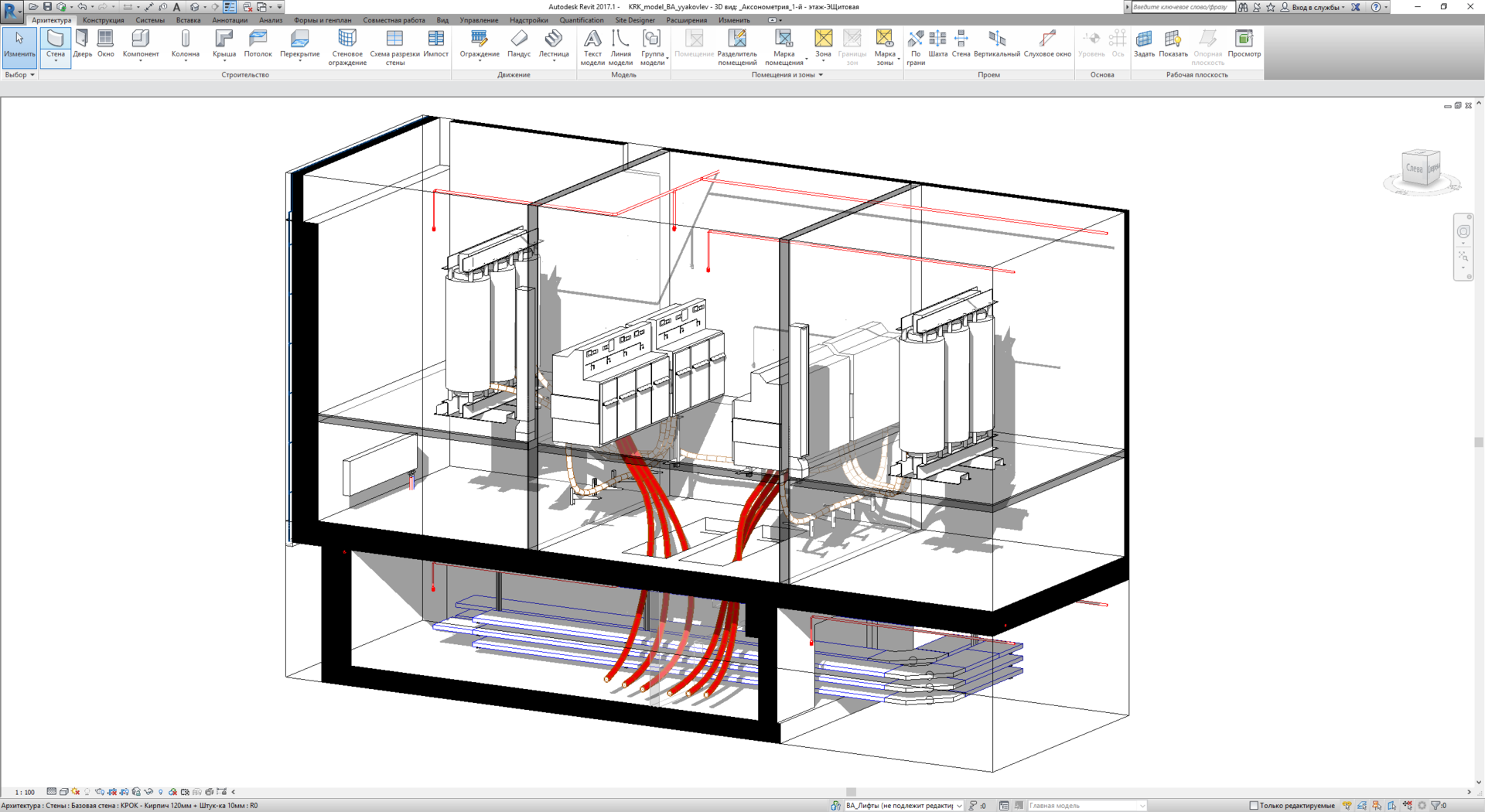 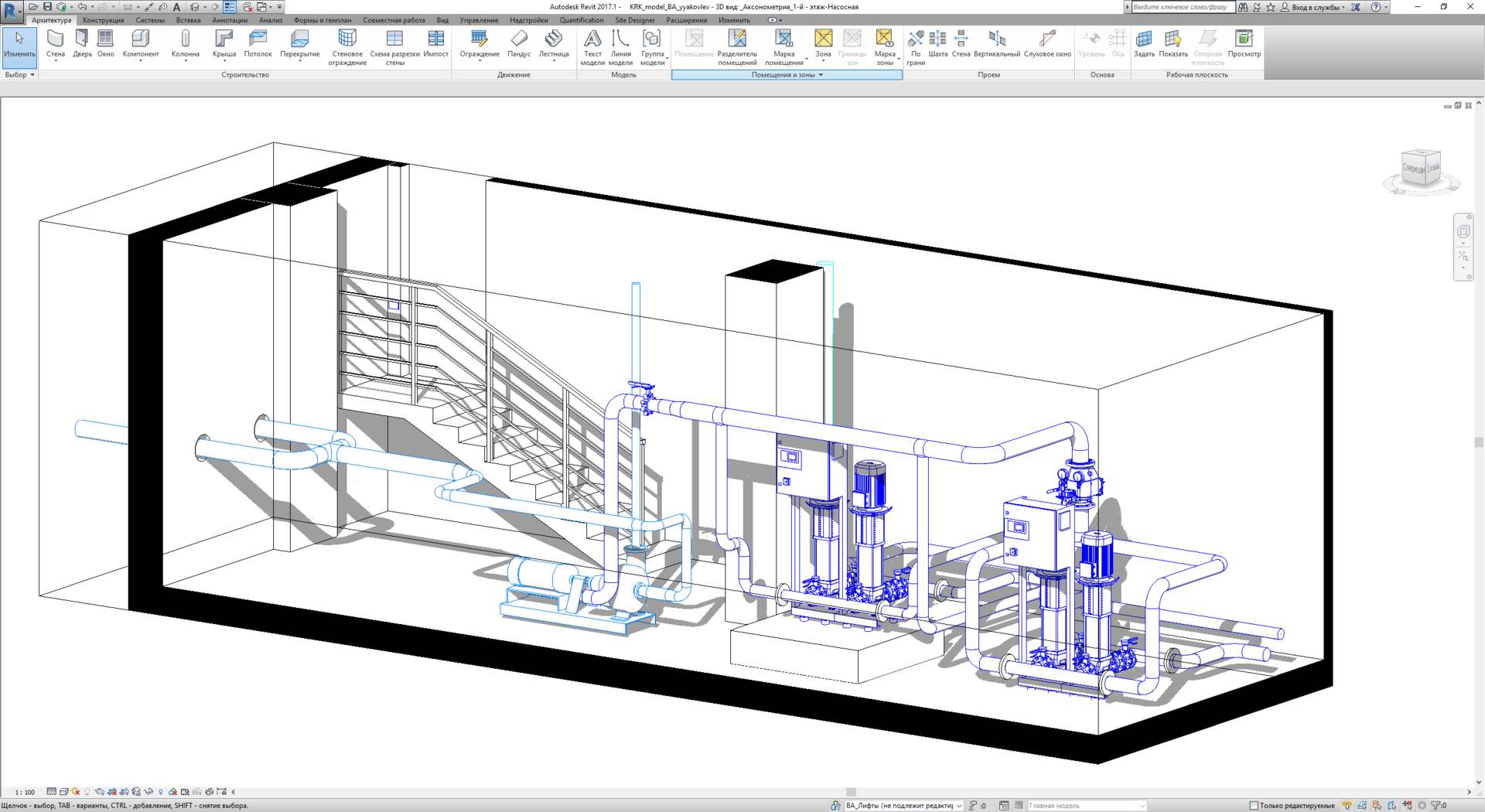 You can see concrete structures and their properties. 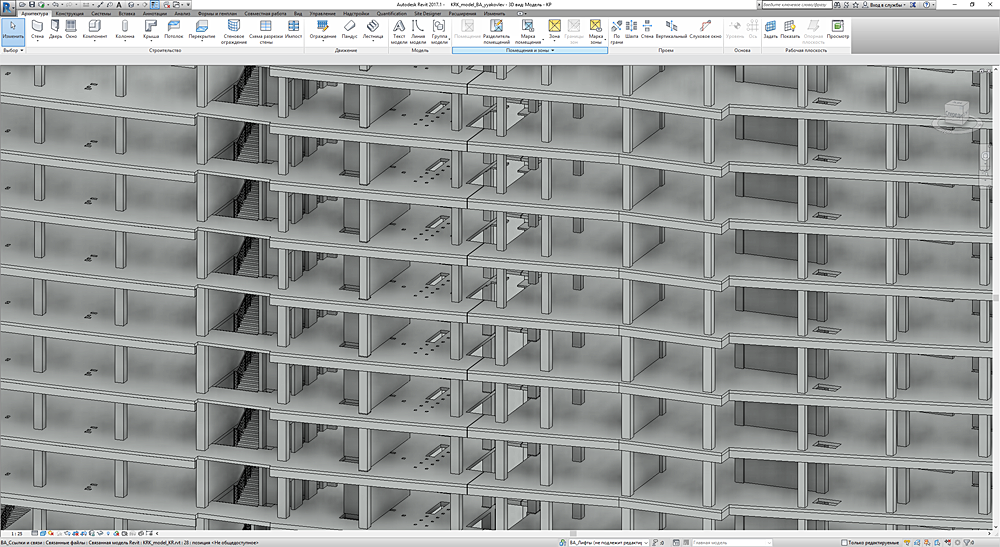 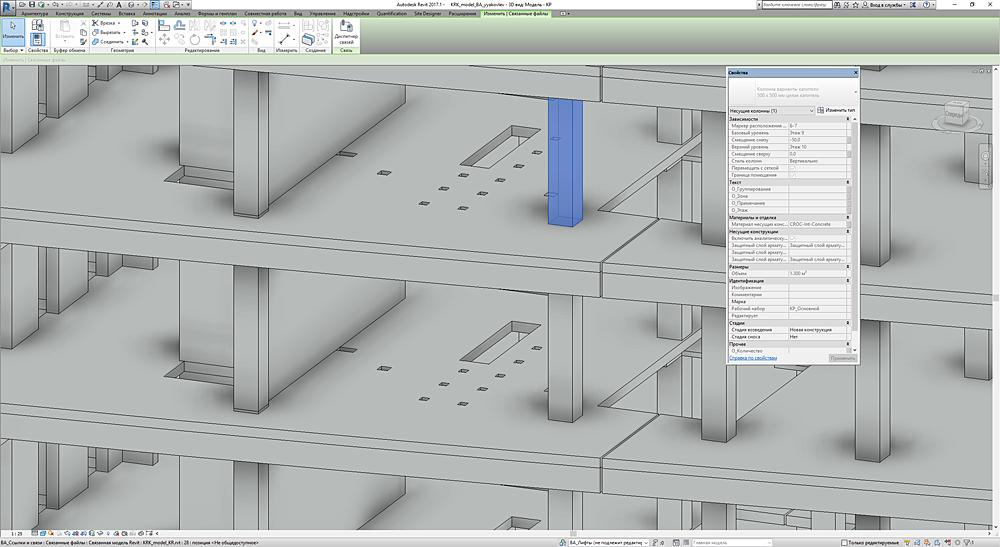 And already on them to impose kinds of systems or separate knots. 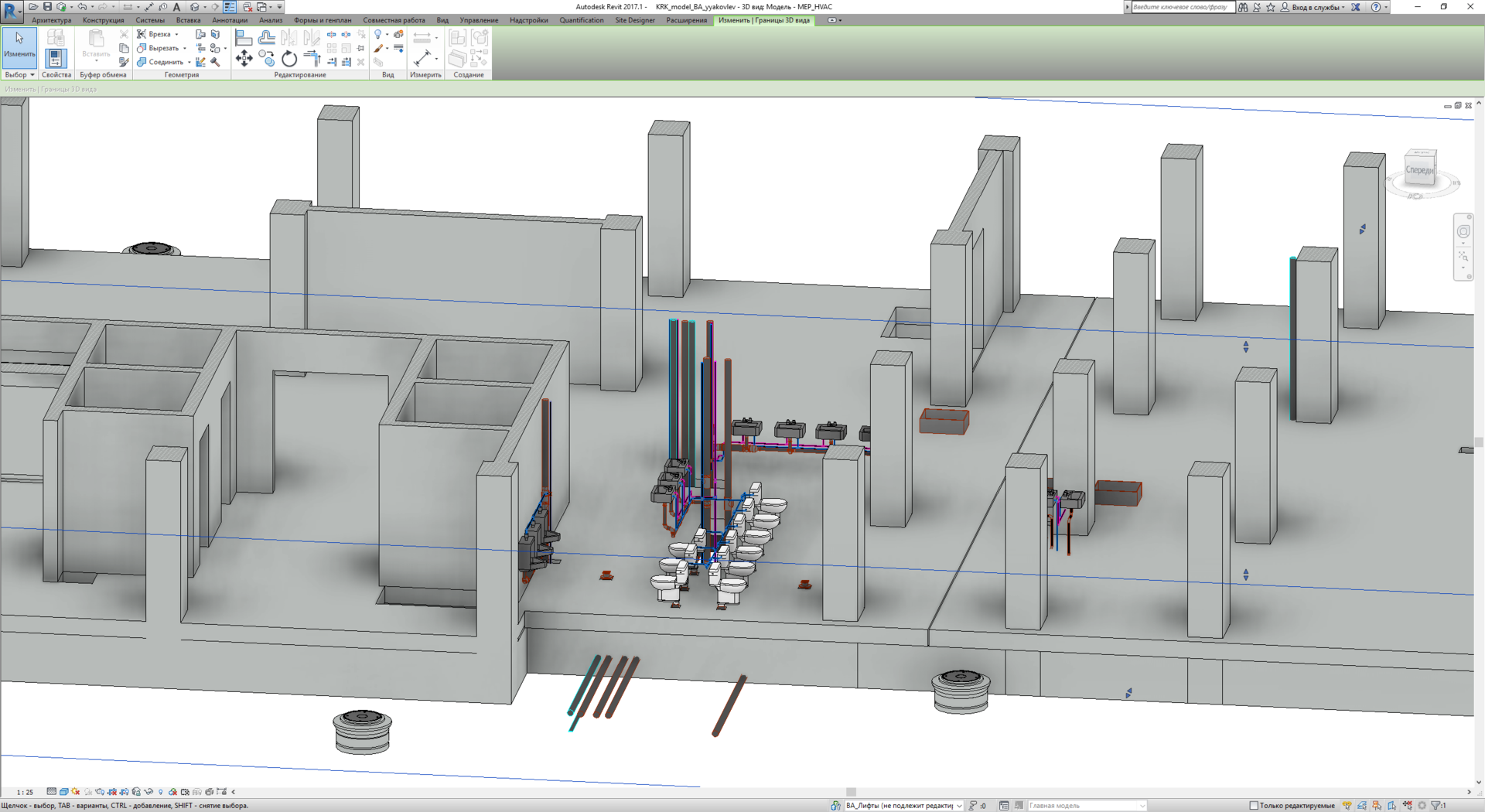 For the customer, we usually collect a beautiful render (here's how below), and we use ourselves when designing the view as above. 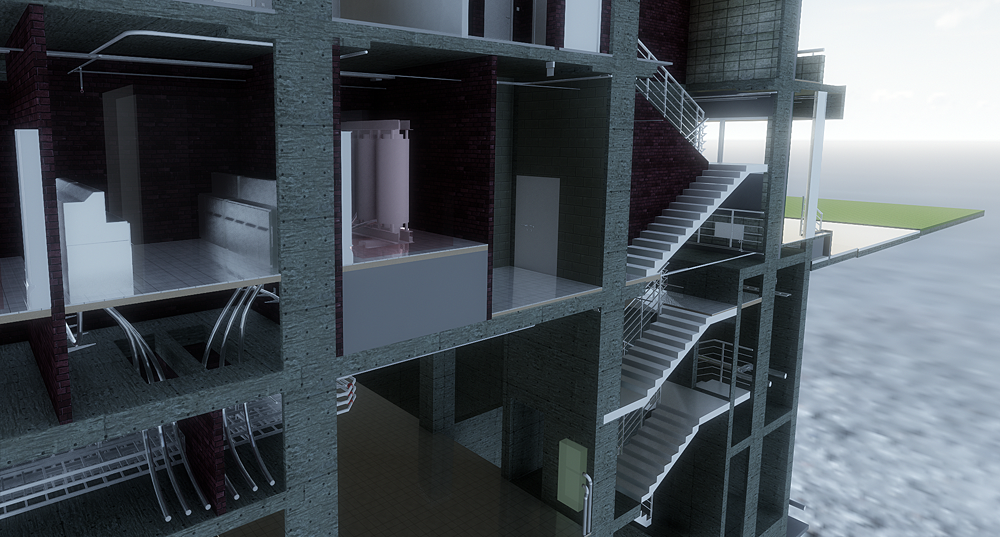 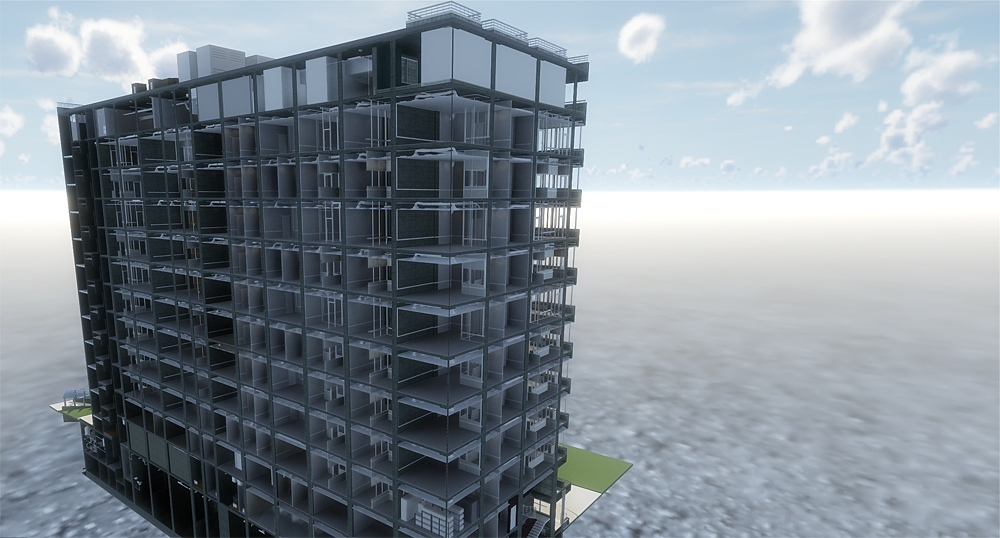 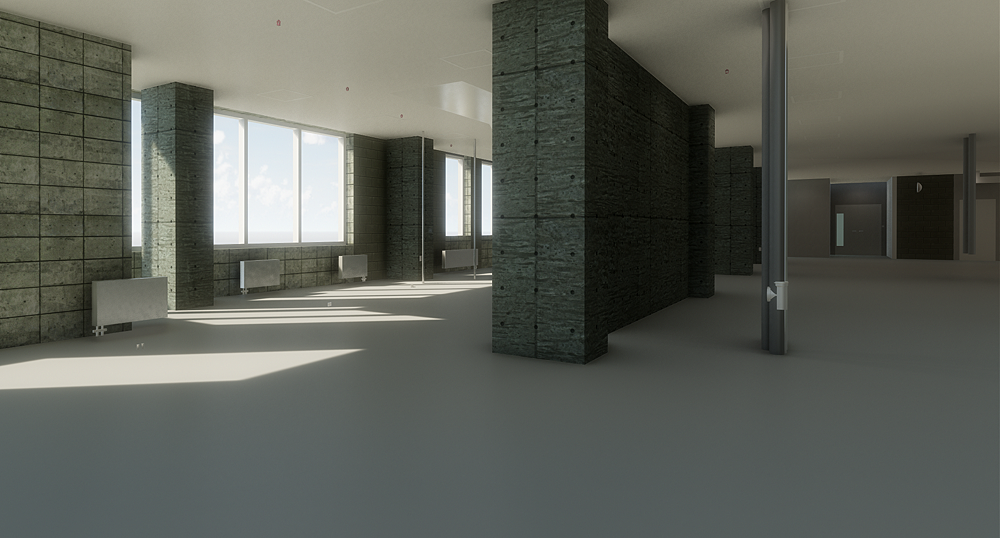 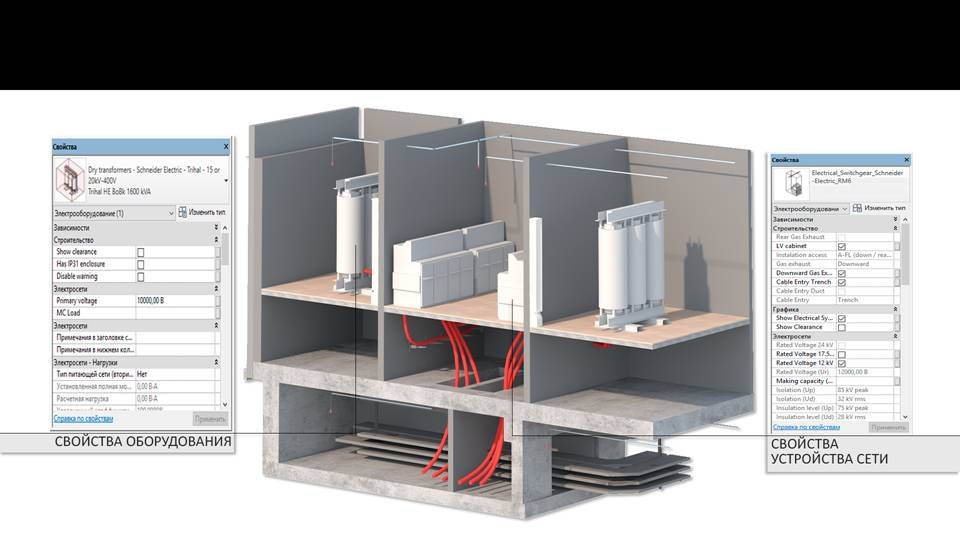 About three years ago computers began to pull BIM-models of buildings. Of course, 3D buildings were designed in the Soviet Union, but now it has become truly public and easily reproducible. 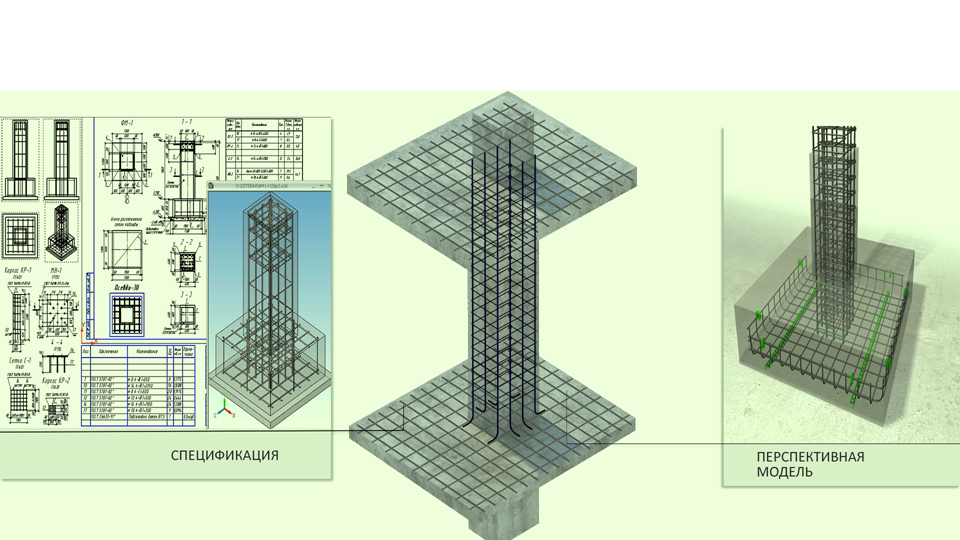 Even these "bricks", that is, models of nodes, such as the device of elevators, are made in 3D and can be viewed from all sides. Since this is not the "Witcher" and not "Mass Effect", the engine is optimized here lastly, there is no special prerender, and powerful enough machines were needed for comfortable work with the system. 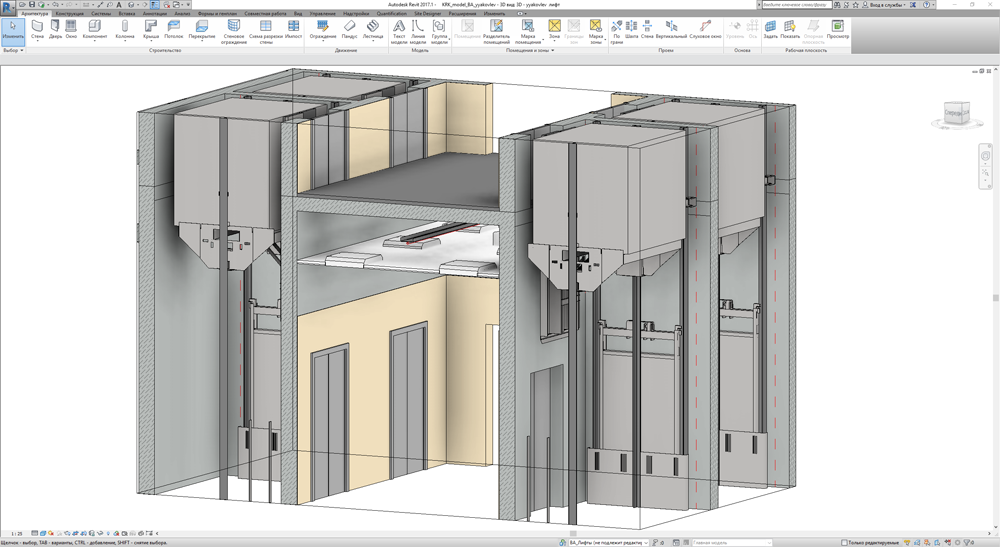 How data is written into such a model

Today, the design of the building can go in three ways:


In the old-fashioned way, that is, on paper, more precisely - in one of the CAD-systems. There will be a bunch of different documents that are then combined in the engineer's mind into one general project. This is a completely normal method, when the work is done by qualified specialists. But in reality, in the real world, someone will still cross the cable channel and ventilation if not when designing, then certainly at implementation. Playing on tolerances, the difference of schemes and the absence of a single plan, you can lose a lot.
Start in the old-fashioned way and get the sketch agreement in the old-fashioned way, and then go to BIM and design everything as it should. Intermediate stage is most often needed when the general contractor decides to control the construction normally.
Design directly in BIM. Then the sketch is one of the views (just saving the model in a certain format and printing out), the plan of the electrician is another representation, etc. All this can already be coordinated in Moscow electronically.


For our office, the cutting of which is visible above, we used both methods. More precisely, imported the old 3-D models and data on project documentation, and then began to support everything in BIM.

The first stage took several months for two specialists. We took the drawings from AutoCAD and imported them into the BIM environment. Something was in PDF, they had to be traced manually. We did the architecture and construct for a month. The rest of the time - an engineer, in particular, had to walk into the building, look at places and photos. The most important thing that the scheme gave was the absence of collisions of systems. BIM-environment does not allow to cross the engineering subsystems: it is similar to the trace of the board. There are many ways to avoid this and catch bugs.

This is extremely important for the general contractor, because he pays for each such collision on the object from his sweat. I've built a residential complex, built a skyscraper, there is a person in our team who designed three metro stations from scratch, data centers and other smaller objects - without any account at all. So, every damn time, when there is no BIM, ventilation always comes to the column. Correct, move, change. Then the designer says: "It's not like that." And the rigmarole begins from the very beginning. Now we are designing directly in BIM, and this removes a lot of headaches.

The 400th LOD in construction practice gives a few more clear pluses. Here is one example. A very common mistake is incorrect calculation of capacity. This is usually done manually by comparing different plans. In BIM - automatically considered a system, and all dock as it should. Often, designers consider different methodologies or simply do not notice any detail, and the equipment simply does not turn on power.
The budget exit is usually up to 7% for restarting new units (this is even if you do not have to change something in the layout on the fly in order to supply new equipment).

On the 500th LOD, the technical and economic indicators of the building are already one in one: it is also constructed with all the formulas for calculating loads, power, toilet grades, racks and the exact number of wires.

Further, having such a model, any automation modules are screwed to it. You can hang over the work schedule and watch. We are here in our building hang up automation and give part of the access to the control room to manage the building as in Hollywood.

It is very convenient for bidders to work with the BIM model from the 400th LOD. Designers are comfortable - they quickly print and cut into knots. This greatly reduces the time of various works. Formed foremen BIM twist and twist. Contractors at the construction site, of course, this is not necessary at all, all the "losses" in sight, and it is very difficult to forge the documentation. The entire technico-economics is checked: the ground mass is ideal, all pipes, everything. Logs are written: who climbed into the model, when he climbed, what he looked, what he changed. Naturally, all these modules complicate the work in terms of training (you need somewhere a minimum monthly course to simply read BIM professionally), but this is already a requirement of the standards. At the state competition, everything will now be through the BIM model. Uneducated contractors will suffer.


How much does it cost

100 thousand square meters under LOD 400 to transfer costs about 5-6 apartments in the center in money and a few months in work. Strange as it may seem, it still pays well for saving on the project. However, a more correct approach is to design at once in a BIM environment. This is longer for a month at the preparation stage, but it turns out almost free of charge in the general estimate.

More expensive automation. For example, our colleagues made a module for the stadium control system, there are control sensors at the lower levels that check the vibrations, the level of slope of the walls and beams, and assess the appearance of defects in the metal. Simply put, they help to understand that the stadium can collapse for six months or a year in normal life or in a few hours if it was damaged by an earthquake (but, it seems, is worth it). The same data is transmitted to the MOE in real time.
Tags: BIM, building information model, design, LOD, project
—