It has been four and a half years since I, using a freshly received invoice, wrote previous hubra with such a title. A great time for the gaming industry. Many new good games have appeared and recently I felt an urgent need to share knowledge about them with the general public.

Another game from the author of the magnificent SpaceChem, with a review which began my previous post. Now (fanfare and screaming schoolgirls) - in 3D! In principle, the presence of the third dimension is the most significant difference from the previous game. The essence of the gameplay has not undergone any special changes: you need to take the detail from the entrance, make them other parts and send them out. However, we can not say that Infinifactory is purely secondary. The presence of gravity, ways of manipulating details - all this creates completely new tasks without causing a sense of deja vu.
Separate pleasure delivers the plot. Yes, yes, the plot of the puzzle is about the creation of conveyors. Practically a production drama ... in space. The protagonist was abducted by powerful but rather stupid aliens, and now he works for them for food. The plot has an effect on how the sets of cubes at the entrances and outlets of the conveyor are called and look. I think you will never be able to erase from memory the mission of making whale canned food. You can also recall the wonderful cynicism with which the game makes you organize assembling single cameras, completely analogous to the one in which you are between missions. However, why am I writing this? You probably already stopped reading and went to install the game.

By the way, an interesting fact: similarity with Maynkraft is not accidental. The creator of Infinifactory is also the author of the old little-known game Infiniminer, one of the ideological clones of which was once Minecraft. 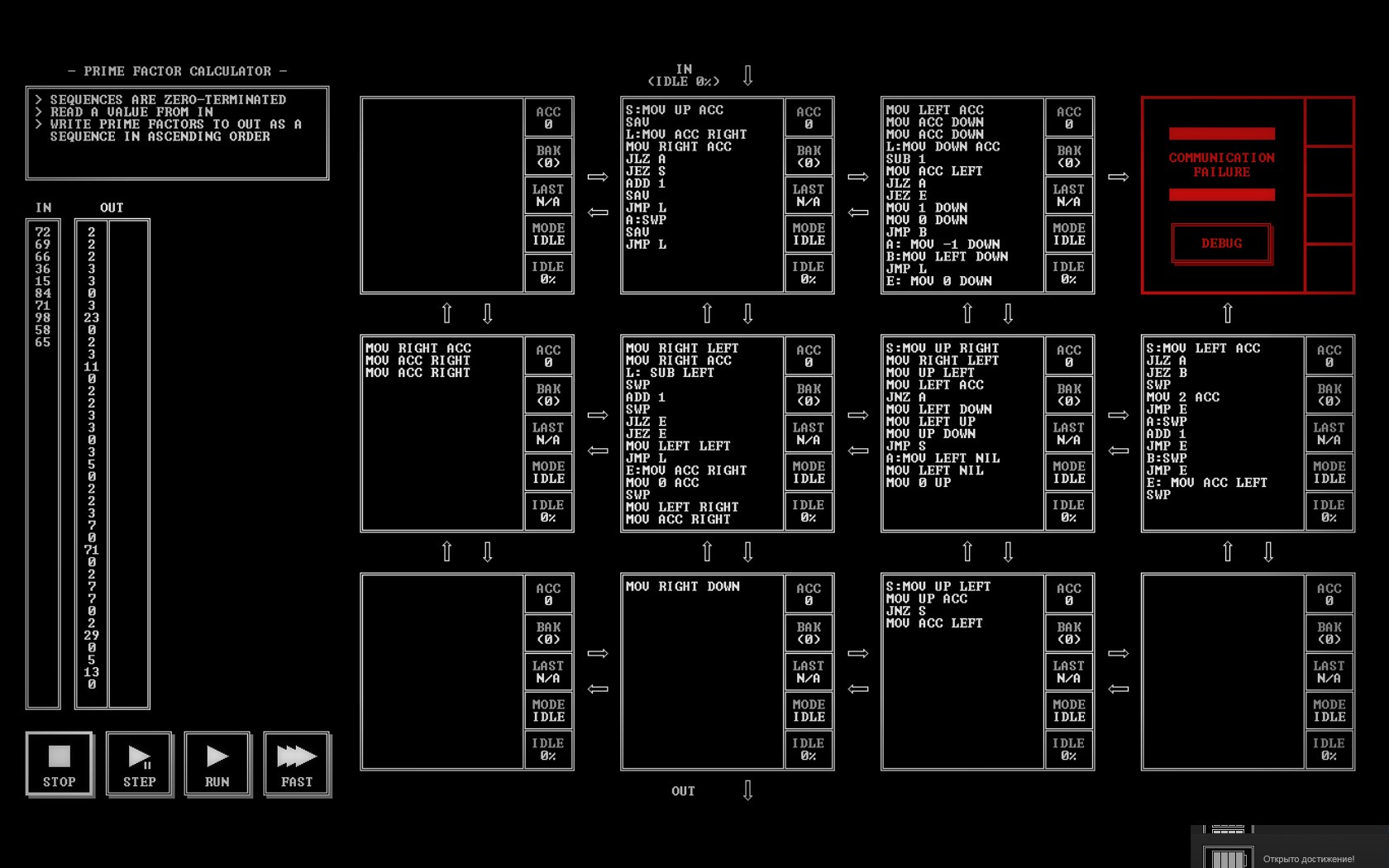 The game of the same developer, which on Habré already has a separate article , but I'll still write about it in my own words, because I love write, and the game deserves it. Briefly, it's a simulator of a primitive multi-thread assembler, on which you have to write a variety of hello worlds. Its capabilities are poor, and a very limited number of rows are placed in each node, which causes the programmer to have difficulties, which (I hope) are unlikely to meet in real work. And that life does not seem honey, the nodes communicate with each other asynchronously. From these difficulties, the essence of the game is born: no node can fully implement a complex algorithm, so it is necessary to separate it between nodes, sometimes in a cruel and unnatural way.

Yes, and there is also a story. The plot of the game about multithread assembler. It sounds even funnier than the old joke about Tetris: Story Mode. The essence of it is that the protagonist inherits a vintage-looking device with a very strange architecture. Programming it, the hero restores data from broken nodes and gradually learns its history - where it came from, what it was created for. And I must say, this is not the knowledge, acquaintance with which passes without a trace ... 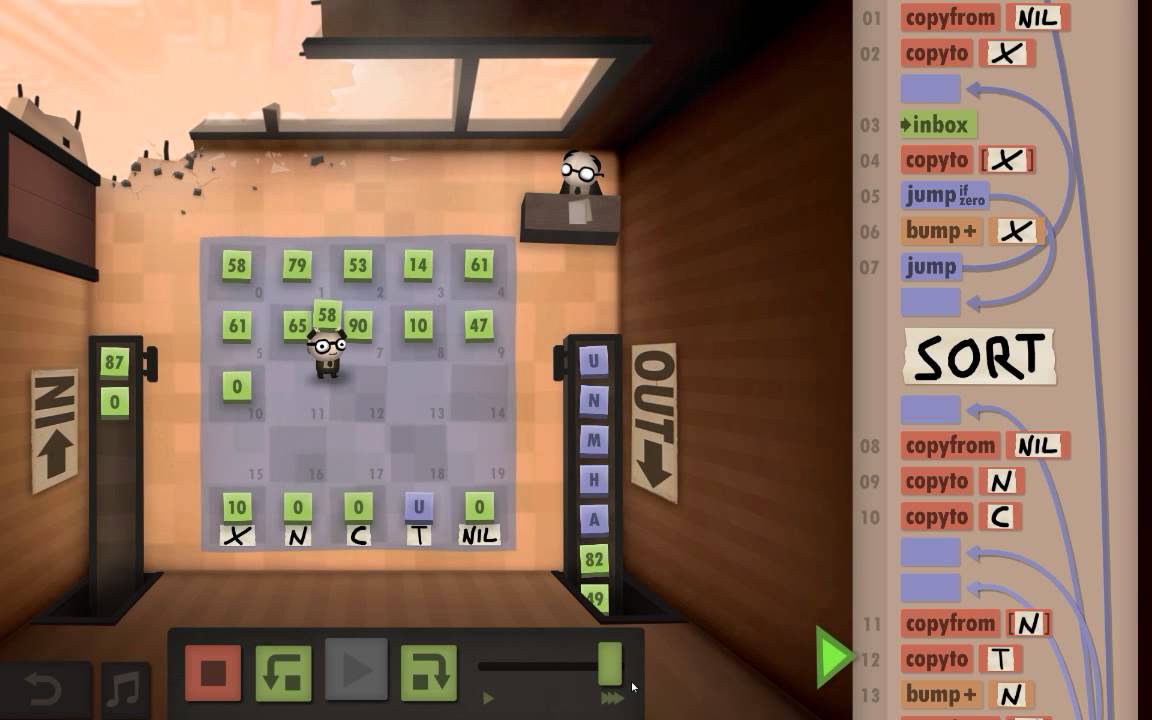 And here is another assembler. Deceptively simple, with cartoon graphics and "mouse programming." Probably not one child, having received a "child developing" game as a gift, broke the keyboard in a rage, trying to optimize the solution of some morally simple task, so that it would be performed two cycles faster.
In fact, if the child is not a perfectionist, aimed at a 100% pass, then this will really be a good learning game for him. And, and still, if anyone is suddenly wondering, the creators of the Human Resource Machine are those who made the World of Goo.

By the way, since we started talking about educational games ... 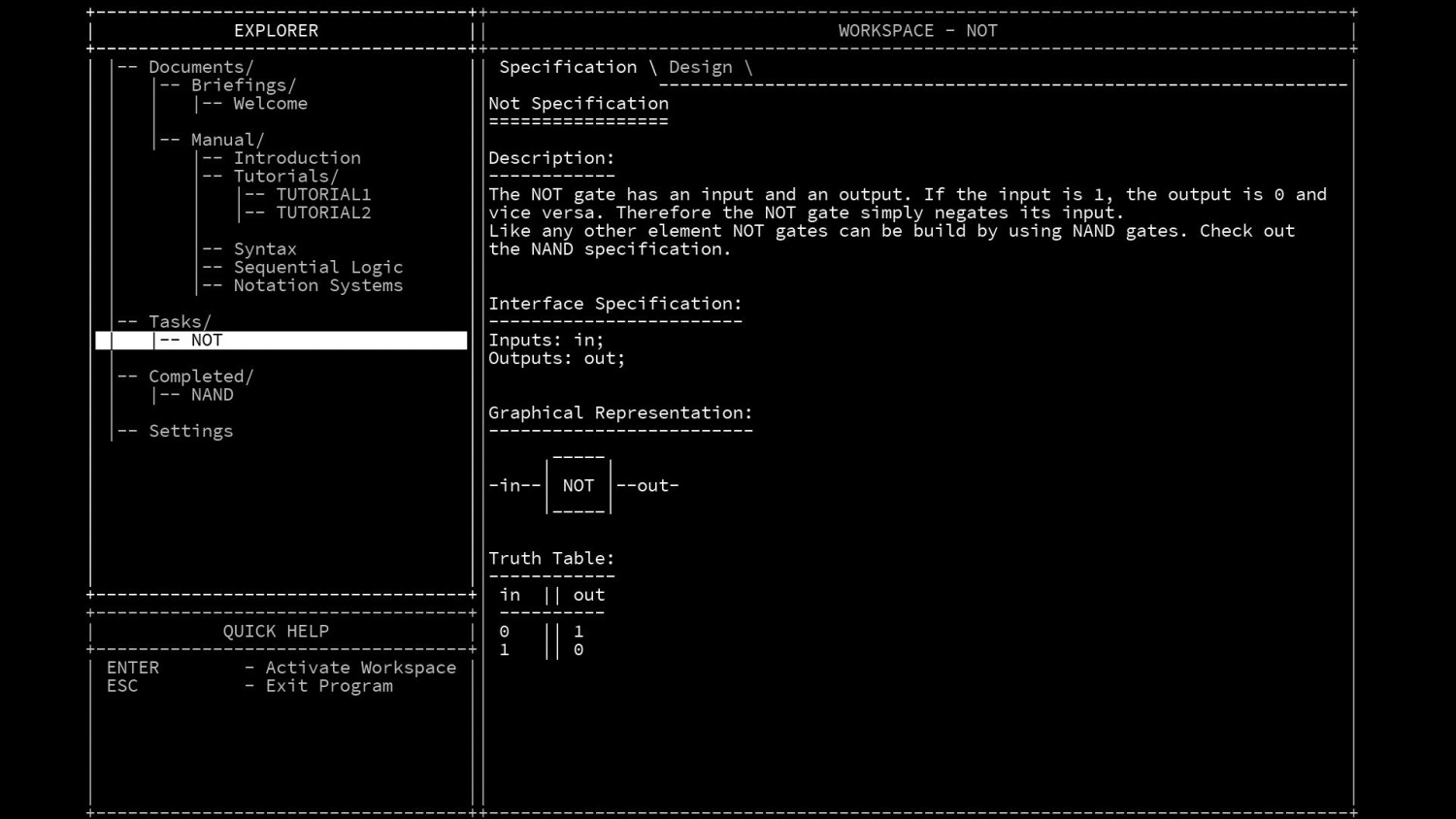 After such low-level things as assembler, why not ... descend to the level below? MHRD is a game about logical elements, in which the player, by his own hands, can collect, from bare NAND, a full-fledged processor. And the game brings him to this smoothly, without sudden jumps of complexity. In my opinion, the passage of this game should be given as a laboratory work for courses such as "Computer Architecture".

"The plot" of the game is simple, as in the good old German movie : the player hires the MicroHard corporation, which wants to win the processor market, or something like that. Accordingly, while it will win the market, the player must assemble the processor itself. This is done using a kind of "programming language", which describes the elements and their connections. Once the assembled element can be re-used in further schemes, without describing it every time anew.

Unfortunately, the game was not enough just to become a true diamond. "IDE" slows down, there is no possibility to interactively play with the collected elements. The game is not gorgeous, but very good. 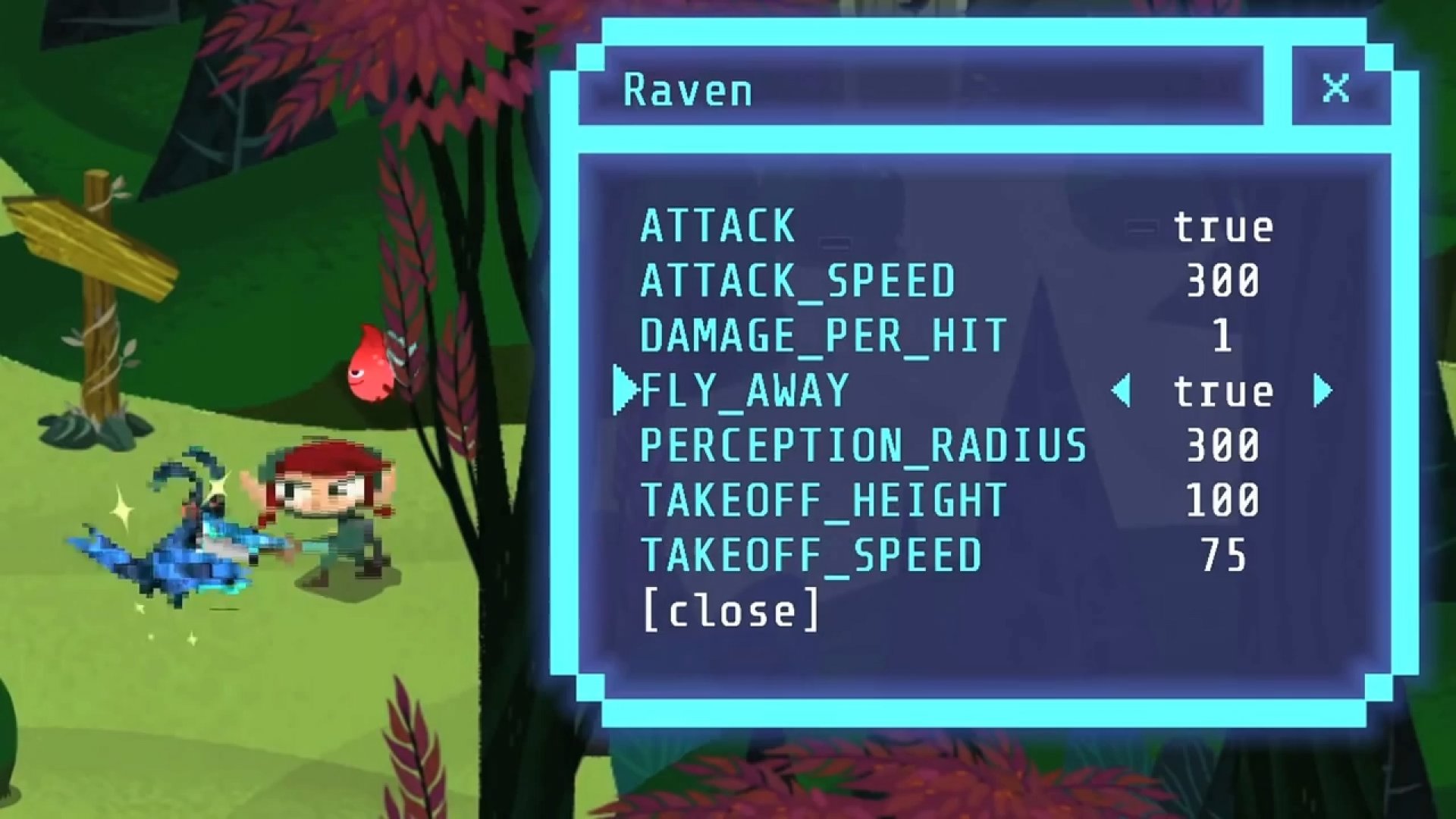 Sometimes players hack games to simplify themselves passage. But what about the game, in which hacks are necessary for the passage? Hack'n'Slash begins with the fact that the main character (whose resemblance to the Link from Legend of Zelda, of course, quite by accident) finds a strange sword ending with a USB-plug. Poking this sword into various game objects, it can change their properties - for example, the most banal, set the monster's "health" property to "0".
In the future, the hero finds new artifacts that do other useful things - for example, showing collision boxes of all objects on the screen. And to defeat the final boss, you must modify the scripts of the game itself, written, incidentally, in the language of Lua. Honestly, the graphics me a little freezes, but from the gameplay point of view the game is very curious.

And since we started talking about the schedule ...


Untrusted -or- the Continuing Adventures of Dr. Eval 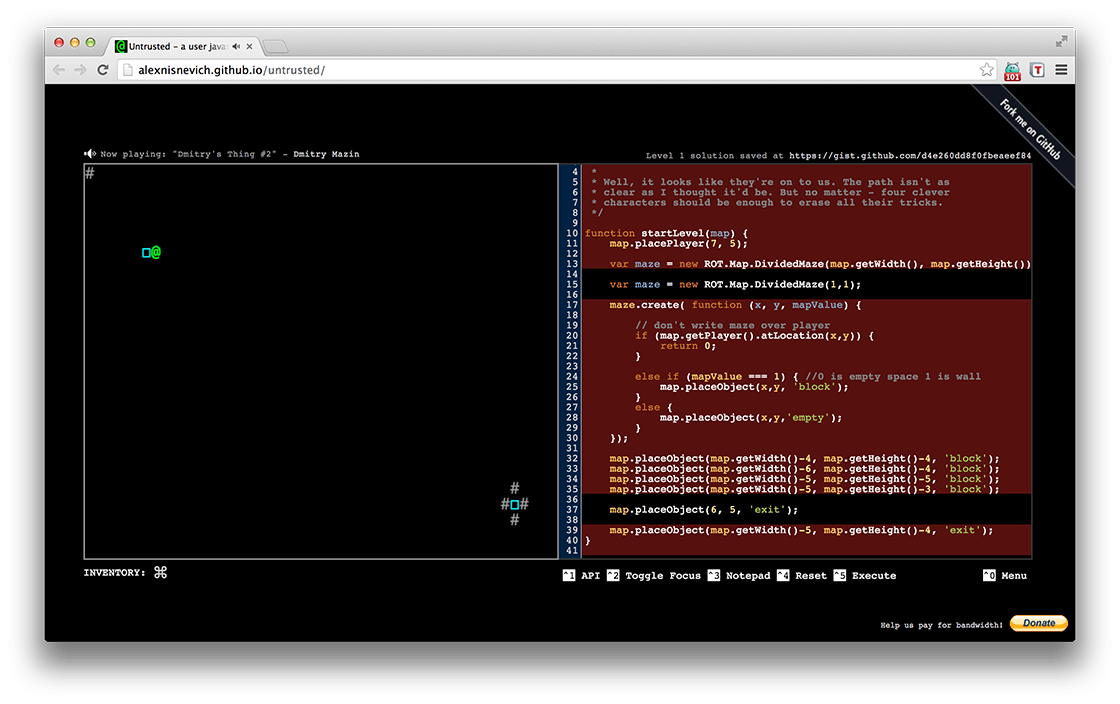 Since we are talking about the chart, Hack'n'Slash has a twin brother, who is more pleasant to me for three reasons. First, it is free and open source. Secondly, it's in ASCII graphics, which warms my heart as a person who passed the original Dungeon Crawl. And thirdly, it's under the hood of JS, and not Lua - here, of course, it's a habit, but the first for me is more familiar than Russian, and with the second I dealt only with writing small mods to Do not Starve.

The gameplay is similar to what happens at the very end of Hack'n'Slash: the player gets access to the game code itself and can modify its individual parts, which is necessary for the passage. The game is witty and beautiful; the only drawback of it is that it is too short.

Well, that's probably all. See you in the third part, another four and a half years.
Tags: games for programmers
—