Who uses magnetic tape and why the future belongs to it 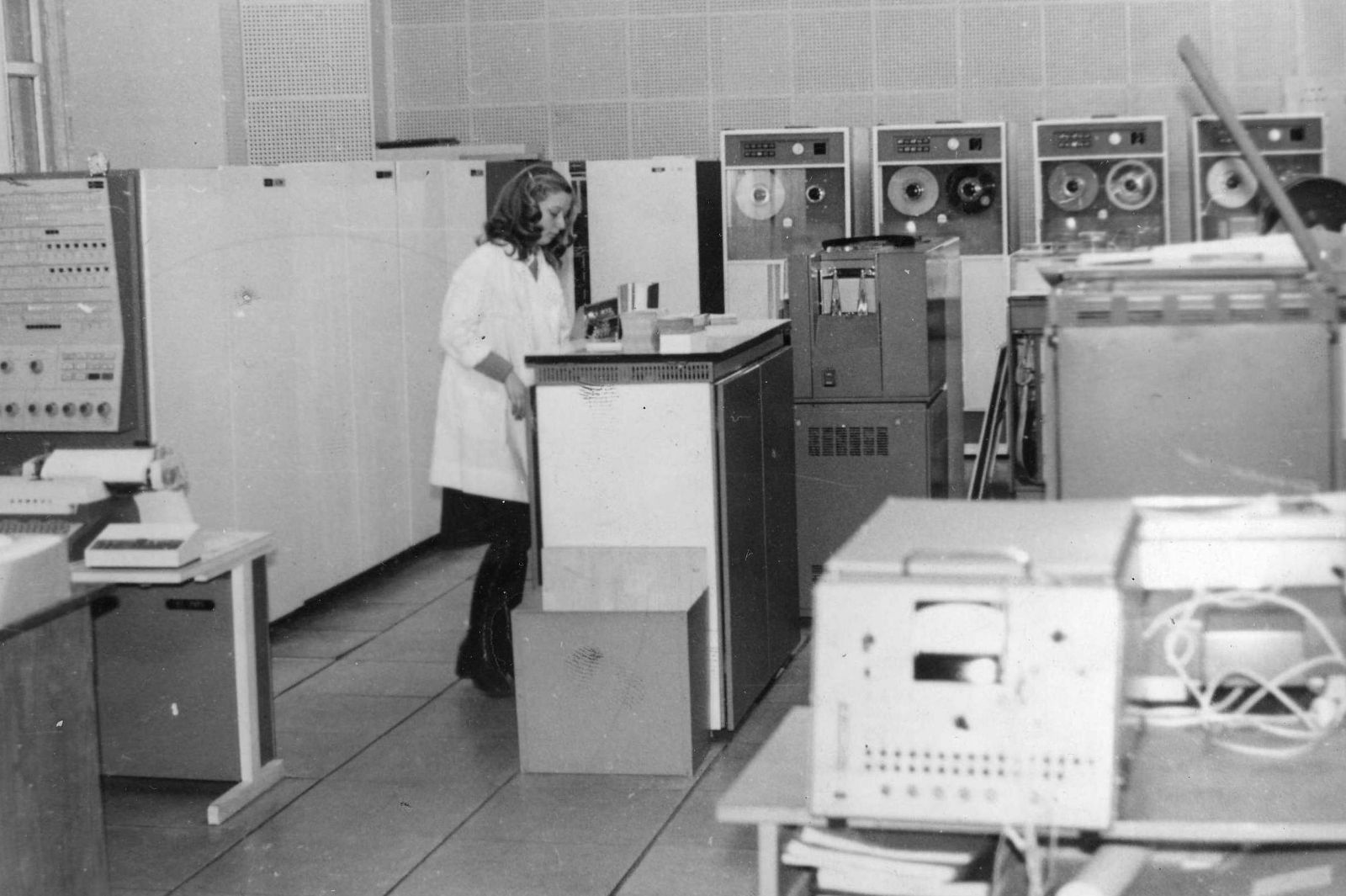 Magnetic tape reels produced by Orwo (GDR) in the Soviet mainframe of the EC-1020 computer at the Department of Applied Mathematics of Physics and Mathematics of the Leningrad Polytechnic Institute, mid-1980s. Read / write speed was 2 meters (64 kilobytes) per second


A bit of history

In general, the German chemist Fritz Pfleumer invented magnetic tape in 1928, that is, 93 years ago. He was the first to think of spraying with a magnetic powder of iron oxide on thin paper using glue. The first tape was made by the German concern BASF. At first, it was used to record sound, and in the 50s, experiments began on recording video, as well as digital computer data, and the second use case was considered much more promising, because magnetic videocassettes still could not compare with film in terms of image quality.

The world's first digital tape was recorded and read by magnetic headsUniservo I for the UNIVAC I computer in 1951. That tape was half an inch (12.65 mm) wide and recorded data at 100 characters per inch. 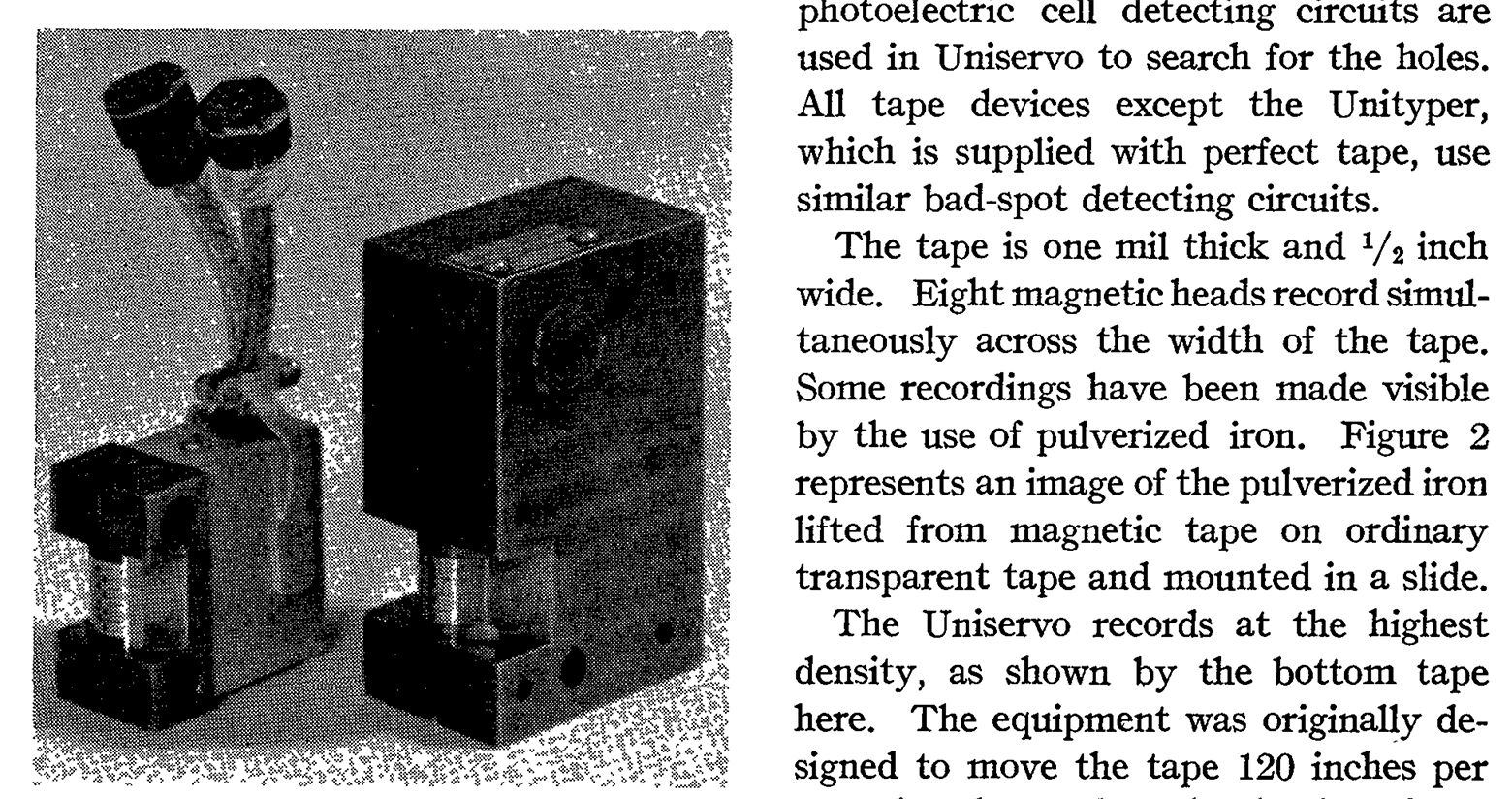 Then IBM got down to business, which released 7-track tapes of the same half-inch width. 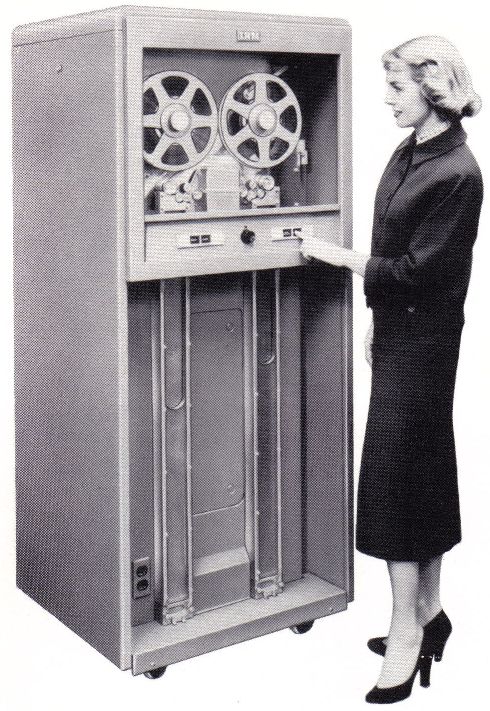 Then were developed 9-track tapes for IBM System / 360. Nine tracks made it possible to write exactly one byte in each tape position (8 information bits plus 1 control). These coils have become the computer standard for a long 30 years, including for Soviet computers. 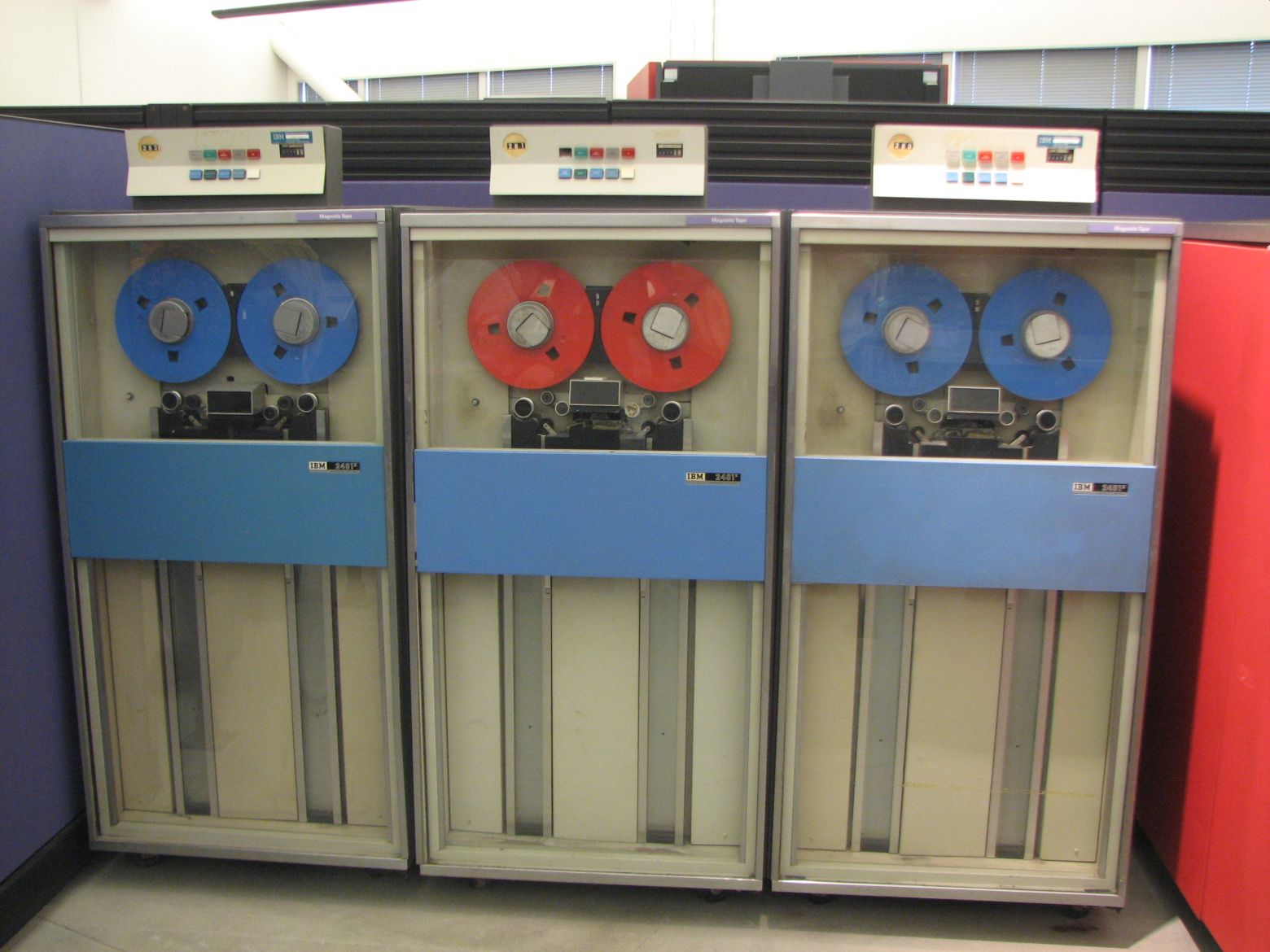 The recording density grew steadily: up to 200, 556, 800 cpi, then for 9-track tapes it was 800, 1600 and 6250 bytes per inch. By the 70s, the recording had reached such a density that it became possible to reduce the width of the tape. This is how the first compact cassettes and cartridges appeared. 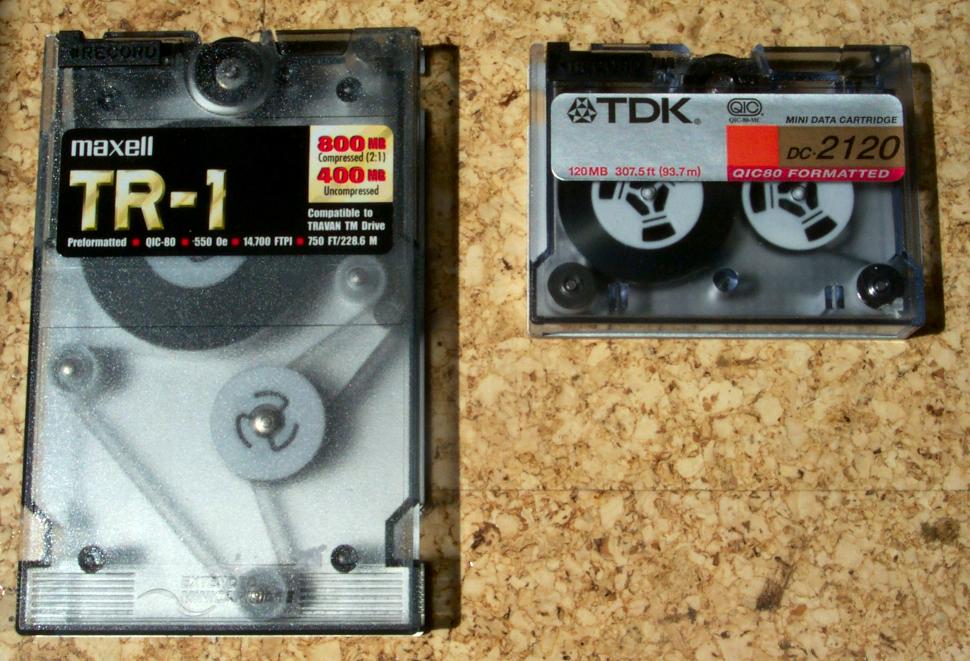 The QIC (Quarter Inch Tape Cartridge) standard was introduced by 3M in 1972, Journey234

Linear Tape-Open (LTO) is one of the modern cartridge standards for maximum recording density.

Left: the structure of the tape. Right: Photographs of barium ferrite and strontium ferrite particles in the coating. Image: Fujifilm

The density of recording in tapes can be compared to that of HDDs, because it uses a similar principle of storing magnetized bits in a media layer on a substrate. 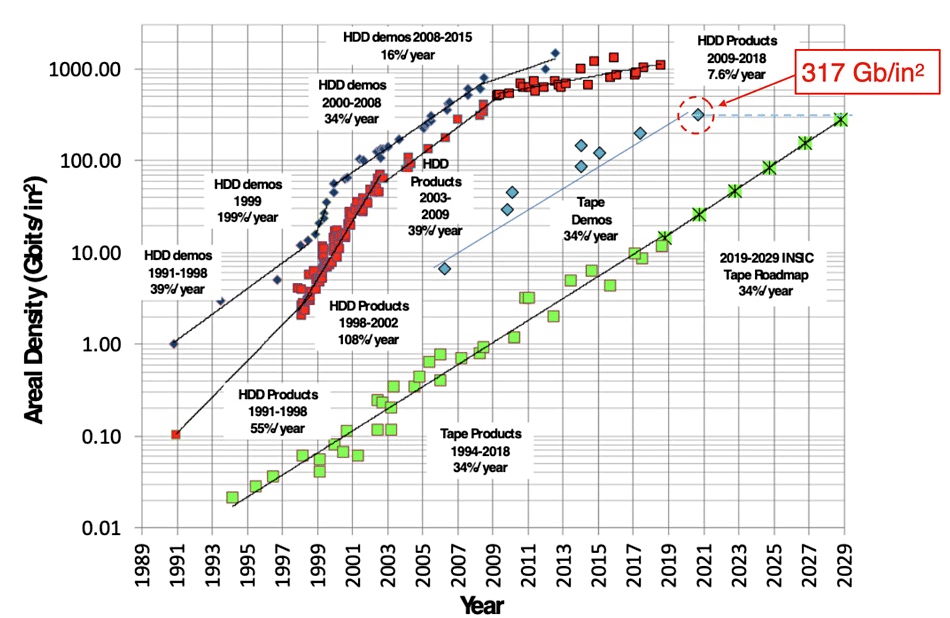 The density of recording on HDD in the last decade has been increasing by 9% per year, and for film by 34%. Slide from IBM presentation

HDD write density has slowed growth in the past decade. Great hopes are pinned only on thermomagnetic recording (HAMR), where the indicator exceeds 2 Tbit / in² ... LTO is far from such indicators.

But even with the existing density, the cartridges significantly outpace the HDD in terms of the total amount of information, because the area of the tape on the reel is much larger than the area of the pancakes in the hard drive. The design of the cartridge allows 32 readheads to be used simultaneously, which gives an advantage in read and write speed compared to HDD.

The main thing is that the density of recording on tape continues to grow exponentially, at about 33% per year. That is, the doubling of the storage capacity occurs approximately once every two to three years. In comparison, progress in hard drive manufacturing has slowed a lot (if HAMR fails).
Increase the recording density and capacity of LTO cartridges. A source: IBM

It turns out that film cartridges are now a more promising technology than hard drives. The film is developing, the market is growing, the developers do not spare money for research and make plans for decades to come.


Features of the tape

The device of the cartridge is, in principle, simpler than that of SSD and HDD, where a mechanism for reading and writing information is built-in inside drive, and this mechanism is extremely complex and prone to breakdown. For example, a common reason for a failure of an SSD and HDD is an electronics failure in the controller, and in the HDD there is also damage to the head. In this case, film cartridges are not in danger. The probability of errors when writing or reading a tape is 4-5 orders of magnitude lower than that of hard drives.

Another advantage of cartridges is safety, because drives physically isolated from the network.

If we compare the cost of storing 1 megabyte on different drives, then after exceeding a certain amount of data, magnetic tape is the most profitable option. For example, for $ 500 you can buy a dozen LTO-8 cassettes, 12 TB each. For comparison, HDDs of the same size will cost about $ 3000.

True, the LTO-8 drive itself costs several thousand dollars , so on small volumes the costs will not pay off. As a low-budget alternative, you can buy a $ 95 used LTO-2 drive with 200GB cassettes for $ 8, but this is an eerily outdated lowtech. 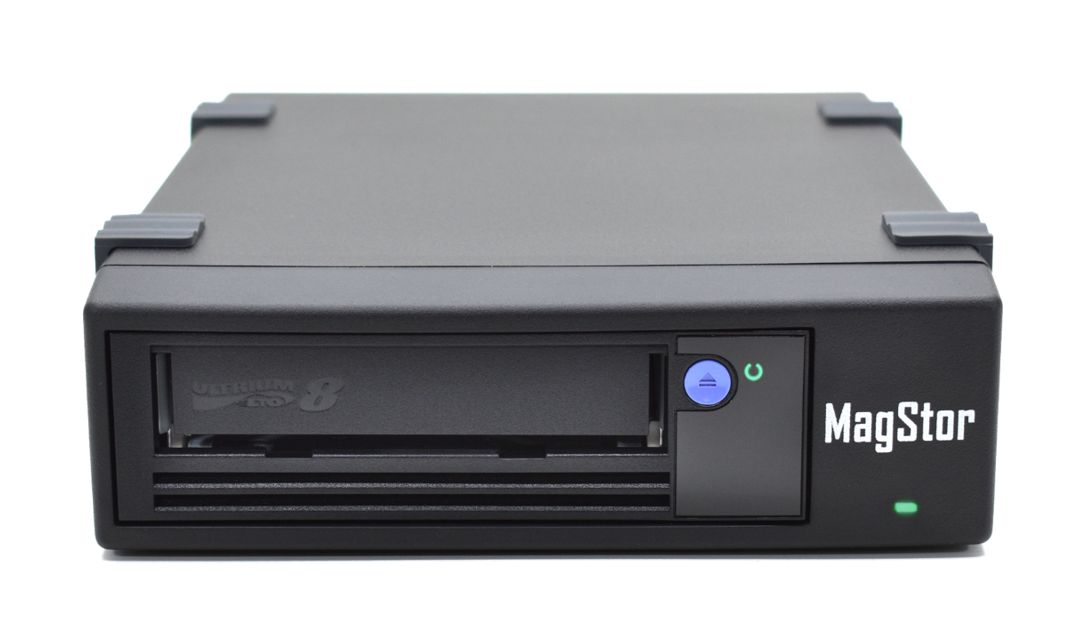 Unlike households, in corporate vaults, the benefits are clear. Additional savings are achieved by reducing the capital cost of building the storage facility, reducing administrative costs and reducing electricity bills, since the storage of cassettes does not require power, as is the case with servers. Cm. Cost of Ownership Calculator (TCO) for a corporate data center.

DVDs are not even considered in such systems. For example, it takes a hundred Blu-ray discs at ridiculous write speeds to store at least 5 TB.

Rewinding a tape is a mechanical process that cannot be done in milliseconds. Imagine that you need to rewind 200 meters of tape to find a file ... In general, in modern LTO cartridges the tape length is more than 1 kilometer. Therefore, the average access time to data is tens of seconds, while for hard drives it is from 5 to 10 milliseconds. In reality, in addition to rewinding the cassette, you also need to find the necessary cassette in the storage, which is also a non-trivial task (see KDPV).

In the latest LTO model, the tape scrolling speed during read / write is about 15 km / h (4 m / s), and the heads are positioned with an accuracy of 3.2 nanometers.

The sequential read and write speeds to tape are faster than modern HDDs. In the latest generation LTO-9, read / write occurs in parallel on 32 tracks, and the speed reaches 400 megabytes per second uncompressed or 1 GB / s compressed.

Based on the advantages and disadvantages of the film, the options for its use are clear. They are reliable drives for cheap long-term storage with good read / write speeds but no instant access. Thus, they are best suited for cold storage of backups.

In 2011, Google accidentally deleted mail in 40 thousand mailboxes ... Backups on all servers suffered. The data could only be recovered from the tape. Then it turned out that Google also uses tape for backup, also like Microsoft and other cloud providers, not to mention their customers.

An unusual example of a long-term backup storage is GitHub Arctic World Archive on Svalbard. Moreover, this is cold storage both literally and figuratively. It is located at a depth of 250 meters in permafrost and is designed for a thousand years of storage.

True, there is not a magnetic tape, but a photographic film with silver halides in polyester produced by the Norwegian company Piql. Such a film has a lifespan of at least 500 years.

One frame on film from a backup of the GitHub repositories, a source

The complete code of 100 million repositories in .tar took up 21 TB on 186 reels. Together with the archive, we put technical guides on decoding QR and formats so that our descendants can convert QR codes back into a code and run it.

Cold storage rates are offered by Amazon and other cloud providers. Cold storage is much cheaper, but data retrieval is expensive. For example, in the service S3 Glacier Deep Archive storage 1 terabyte costs only $ 1 per month (12-48 hours access). In comparison, standard S3 storage is 23x more expensive.

Now the number of ultra-large data centers in the world has reached 597 ... A special term is used for them: Hyperscale Data Center (HSDC). 52 similar structures were built last year.

Amazon, Microsoft and Google account for more than half of all large data centers.

Some modern scientific instruments generate such a huge amount of data that they cannot be stored except on tape drives. For example, the Large Hadron Collider generates 140 TB per day , and a giant distributed radio telescope SKA (Square Kilometer Array) with thousands of parabolic antennas will produce up to 1 exabyte per day ... This is comparable to the volume of traffic on the entire global Internet ( 5.3 exabytes per day in 2020 ). 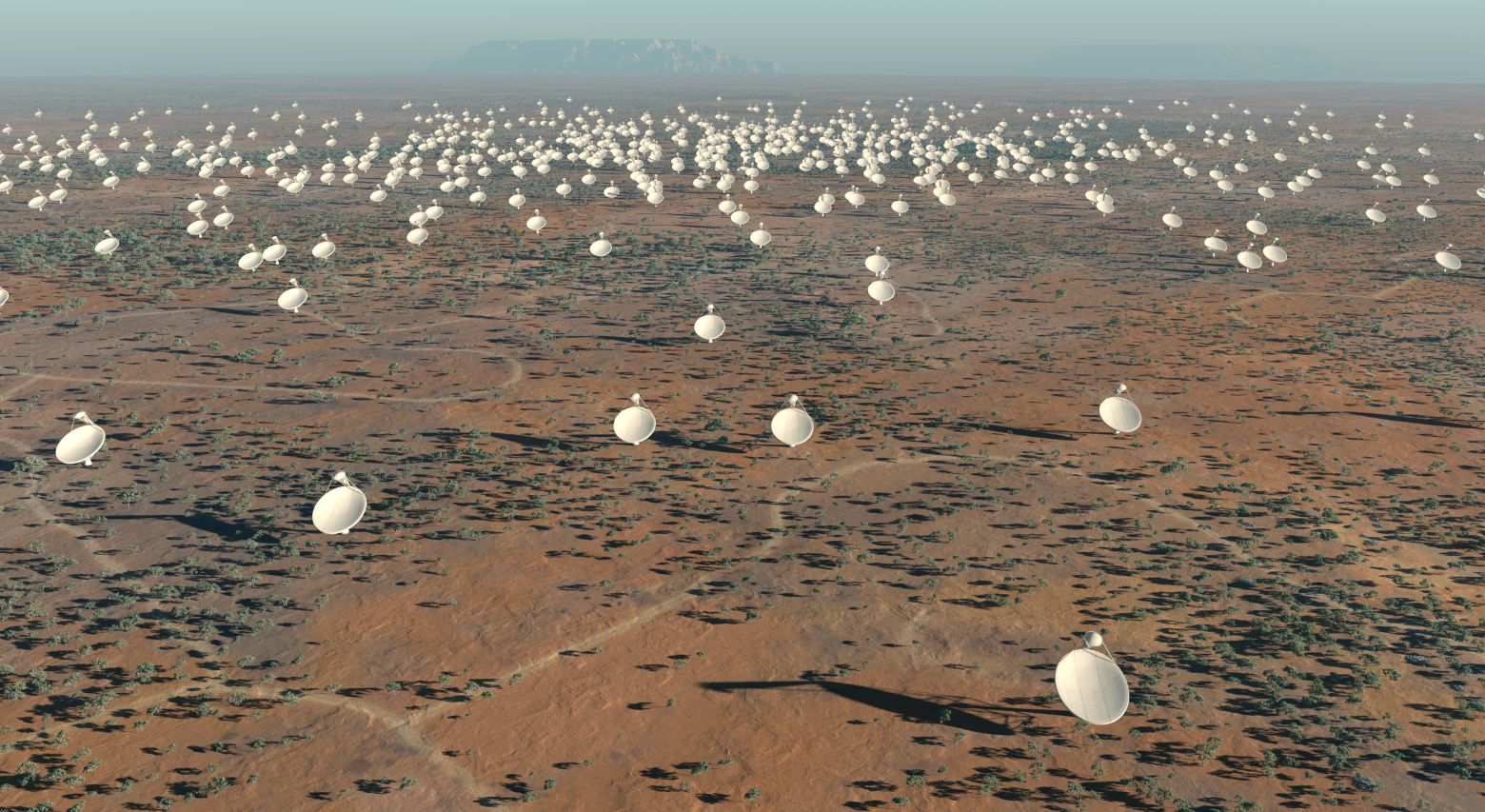 For such scientific instruments, the two most important parameters are high storage capacity and high write speed, and access time is not so important anymore. Therefore, tape drives are used here.

By IBM assessment There are approximately 345,000 exabytes of data stored on magnetic tape in the world today. It turns out that the film is currently the main accumulator of human civilization. And it is very likely that this situation will continue in the near future.
Tags: backup storages, backups, barium ferrite, cartridge, GitHub
—