About ten days ago, when I started updating apps in the App Store on my Mac, I ran into a curious error.

The next day, the Music application stopped working. 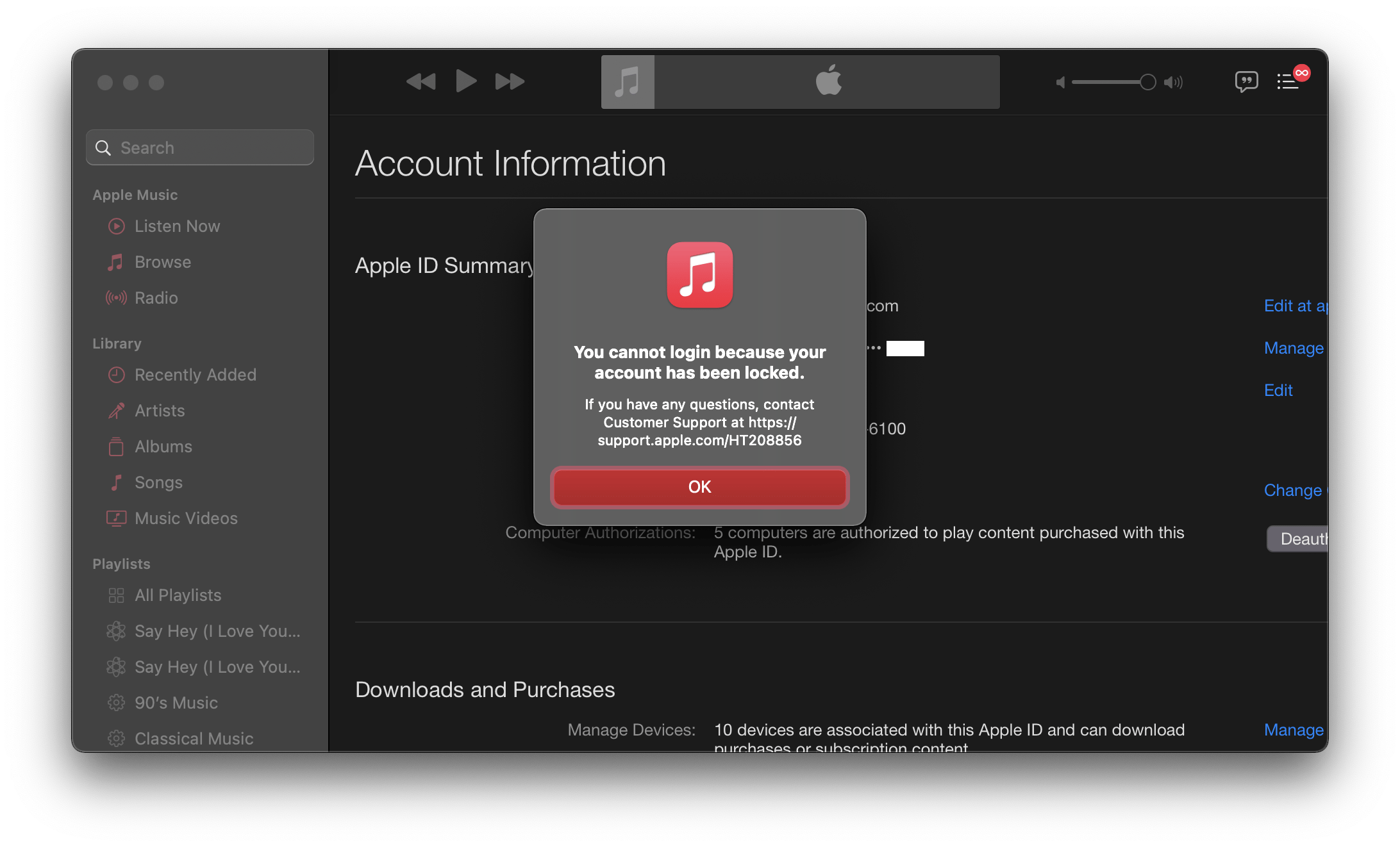 Now I am really worried. I checked my phone, but neither the App Store nor Apple Music worked on it either. A few minutes later, an error message appeared in Calendar - it stopped syncing. I immediately tried to contact Apple Support from a Mac, but Apple Handoff was also disabled.

The first Apple employee I talked to spent some time studying the problem, after which she said that she could not do anything but pass my request on to a more serious specialist, and that I needed to wait for a call that "should" occur on the next day. I asked what the problem might be, but she seemed as confused as I was. While some Apple services still worked, such as iMessage (thank goodness) and Photos, I was terrified that other services would suddenly become unavailable, or that I would lose a significant amount of data stored in iCloud.

A couple of days later, I lost my patience and contacted Apple tech support again. This time an employee of the company mumbled something about the Apple Card, and then he also had to say that he did not have sufficient authority to help me. He said that Apple ID belongs to a different department and can only be contacted by email. He wrote to them. I kept on waiting.

The next time I tried to use the Apple Card, it was rejected. It’s strange. I checked the Wallet app, it turned out that the balance is below the limit. Remembering that the Apple support representative had said something vague about the Apple Card, I decided to go through my email to see if there was any connection.

As it turned out, in January my bank account number changed, which is why Apple Card auto payments stopped working. The Apple Store then charged for the card. Less than fifteen days after that, my App Store, iCloud, Apple Music and Apple ID accounts were disabled by my Apple Card.

I bought an M1 MacBook Pro in mid-January. When paying for the purchase, I was offered a loan in exchange for an old MacBook Pro, which I had lying around somewhere. The Apple Store told me that I would receive a “surcharge handover kit” in the mail, after which I would have two weeks to ship my old MacBook to Apple. Sounds simple and very Apple style.

But the shipping kit for my old laptop never arrived. I forgot about him. When I received an email in mid-February asking about a surcharge exchange, I replied (as suggested) that I never received the kit and requested another. I received no answer.

Shortly thereafter, Apple seemed to add the amount of credit I received when I bought the M1 MacBook Pro to my Apple Card balance. Normally, this would not be a problem. Imagine if I used any other credit card - it would be just a regular payment. But since these were the Apple Store and Apple Card, the situation developed very rapidly.

On February 15, Apple sent me this email:

We were unable to receive full payment for your new iPhone. Therefore, we will block further access of the device to the Apple iTunes and Mac App Store, as well as deactivate all accounts associated with the purchased device.

To resolve this issue, call 1-877-255-5923 and contact an Apple Card Specialist at Goldman Sachs. After solving the problem, please answer this letter so that we can withdraw the difference in value from your card.

For your safety, do not send credit card information by email.

It looks like since Apple's bills are special, if your account isn't 100% current, Apple quickly takes serious action. Unfortunately, this letter got lost in the inbox and I didn't see it until I started looking deliberately. But this is extremely disturbing for the following reasons:


Apple says it will hold my Apple accounts hostage until it receives payment.
The company says it is related to the iPhone, when in fact it refers to the MacBook Pro. And iTunes no longer exists. This lack of attention to detail is not particularly pleasant, given the severity of the threat that followed.
The message was sent only a few days after the Apple Card expired.
This makes it clear to us that Apple's charges for Apple Card payments are different from other purchases, and this could have serious consequences. (Also, the Apple Card contract doesn't mention these details.) 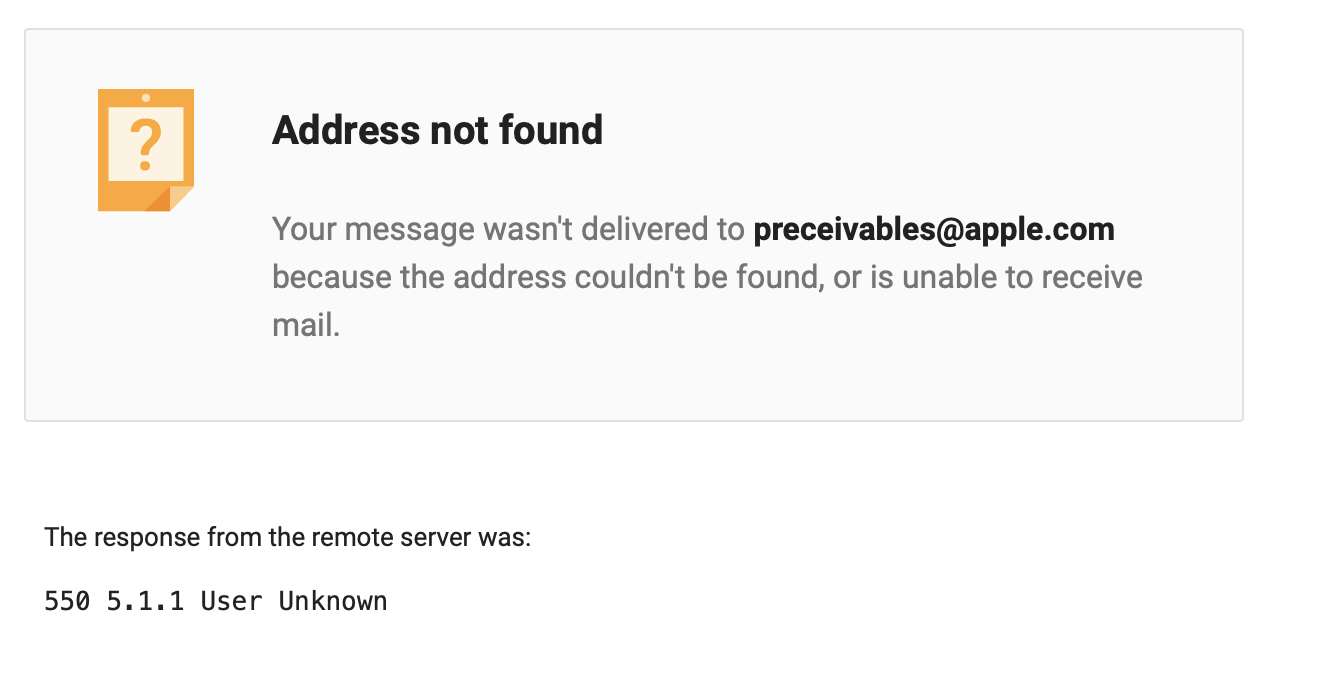 At this stage, Apple technical support could not help me and could not even figure out the cause of the problem. My App Store, Apple Music, iCloud and Apple ID accounts have been disabled. When responding to an email as instructed, it was returned to me.

So I used Apple Business Chat to talk to Goldman Sachs. The bank representative seemed confused, asked me to wait (quite a long time), and then said that the only way he could reactivate my Apple ID is by sending an email to the Apple department and waiting for a call back for "several days."

This morning someone from Apple called me and explained that I finally found the right department, but the team to reactivate the Apple account can only be contacted by email and this process will take at least 3-5 business days. He wrote them a letter.