Timsort is a hybrid sorting algorithm, derived from merge sort and insertion sort, designed to perform well on many kinds of real-world data. It was invented by Tim Peters in 2002 for use in the Python, OpenJDK 7 and Android JDK 1.5. Here is a table in order to understand that better from Wikipedia. 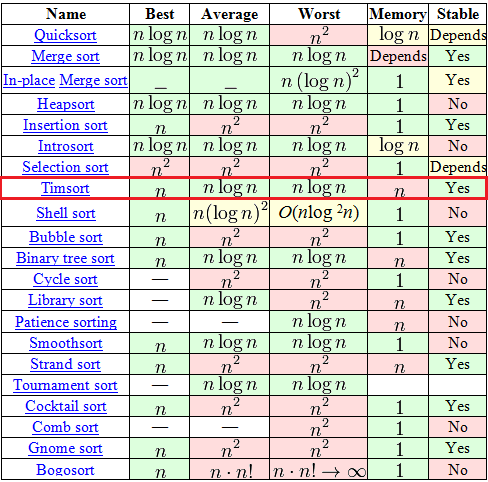 There are only 7 of adequate algorithms among a huge selection in the table (with complexity O(n logn)), but only two of them have stability and complexity of O(n) at best. One of the two is long well known to everyone "Tree sort that builds a binary search tree", and the second one is Timsort.

Timsort is designed to take advantage of partial ordering that already exists in most real-world data. Timsort operates by finding runs in the data. A run is a sub-array, at least two elements long, which is either non-descending or strictly descending. If it is descending, it must be strictly descending, since these runs are later reversed by a simple swap of elements from both ends converging in the middle. This method is stable if the elements are present in a strictly descending order. After obtaining such a run in the given array, Timsort processes it; and then continues its search for the next run.


Let’s get straight to the point


Do not expect here some complex mathematical discoveries. The fact is that Timsort is not entirely independent algorithm, but it is a hybrid, an effective combination of several other algorithms. Briefly, the essence of the algorithm can be explained as follows:

1. Divide an input array into sub-arrays by a special algorithm.
2. Sort each sub-array by insertion sort.
3. Gather the sorted sub-arrays into a single array using a modified merge sort.

The keys are always hiding in details, namely they are the algorithm and a modified merge sort.


Here are the used concepts

Number minrun is determined on the basis of N in terms of the following principles:

1. It should not be too large as far as insertion sort will be further applied to the sub-array of the size of minrun, but it is effective only for small arrays.
2. It should not be too small, because the smaller is sub-array the more merging iterations of sub-arrays should be done at the last step of the algorithm.
3. It would be nice if the optimal value for N / minrun is a power of number 2 (or close to it). This requirement determined by the merging algorithm of sub-arrays that works most efficiently in sub-arrays of equal size.

At this point the algorithm's author refers to the own experiments that showed when minrun >256 clause 1 is broken, minrun <8 clause 2 is broken and the most effective to use values from a range (32 to 65). Exception - if N <64, then minrun = N and Timsort converts into a simple insertion sort. The final algorithm for this simply takes the most significant six bits of the size of the array, adds one if any of the remaining bits are set, and uses that as the minrun. A sample code looks like this:

So, at this stage we have the input array, its size is N and the calculated number of minrun. Here are the steps:

1. Merge sub-arrays in the equal size (so it turns out better).
2. Keep the stability of the algorithm, namely there is no need to do any pointless swaps.

This is achieved in this way.

1. Create an empty stack of pairs <sub-array starting index> - <sub-array size>. Take the first sorted sub-array.
2. Add some data in the stack < start index > - <size> for the current sub-array.
3. For this, the three top-most runs in the stack which are unsorted are considered. If, say, X, Y, Z represent the lengths of the three uppermost runs in the stack, the algorithm merges the runs so that ultimately the following two rules are satisfied:
X> Y + Z
Y> Z
4. If the first of the two rules is not satisfied by the current run status, that is, if X < Y + Z, then, Y is merged with the smaller of X and Z. The merging continues until both the rules are satisfied.
5. Then the algorithm goes on to determine the next run.

The rules above aim at maintaining run lengths as close to each other as possible to ensure balanced merges, which are more efficient.

Let us imagine an ideal situation: we have the sub-arrays of the size of 128, 64, 32, 16, 8, 4, 2, 2 (forget for a moment about the requirements of "the size of the sub-array> = minrun»). In this case, any mergers would not be executed until it reaches the last 2 sub-arrays, but after that there will be executed 7 perfectly balanced merges.


Merging procedure for the sub-arrays


As we remember in the second step of the algorithm, we merge the two sub-arrays into one sorted. We always merge two consecutive sub-arrays. An additional memory is used for their merger. 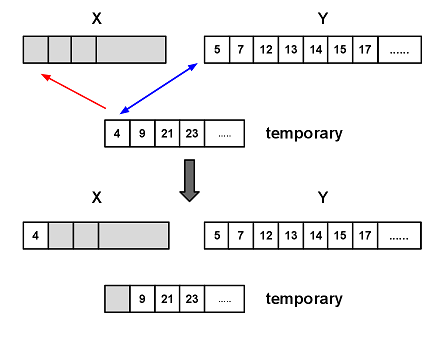 Modification of merging procedure for the sub-arrays

1. Start a merging procedure, as it was shown above.
2. Remember from what sub-array was the element at each operation of element copy from a temporary or larger sub-array into the resulting.
3. If a number of elements (in this algorithm implementation the number is strictly equal to 7) was taken from the same array, it is assumed that we will continue to take data from it. To confirm this idea, we go to the galloping mode, namely in this mode we use the previously mentioned adaptation of binary search to identify where the first element of the smaller array must be placed in the larger array and vice-verse. Thus the entire set of elements, in one array, occurring before this location can be moved all together to the merge area and the other way round.
4. When the data is no longer fit from the current array (or when we come to the end of array), we can finally copy them all at once (which may be more effective than single element copying).

That is the whole algorithm.