Instead of imposing its own numbers (which would be detrimental to PR), Microsoft has adapted to informing businesses and consumers about possible losses from coiled software. Based on research conducted in 2014 Microsoft has released a publication collaborated with research firm IDC and the National University of Singapore.

This report says that in 2014, consumers around the world spent $ 25 billion and approximately 1.2 billion hours (troubleshooting) on pirated software.

On the other hand, companies have spent half a trillion dollars fixing problems associated with downloading pirated software. These problems are caused by service, malware, and viruses.

In the past, Microsoft has waged an active war against piracy. She even carried out raids in Mexico to arrest cartels. selling its software.
<mumblecut />
Recently, however, the company has begun to pursue a much calmer policy. When TechRadar asked for a PR statement on this issue in 2019, the answer was generalized and rather passive:


“We motivate consumers to buy genuine Windows and Office 365 products from Microsoft and its partners. According to industry experts, the use of pirated software, including pirated Windows and Office 365, increases the risk of malware attacks, fraudulent publication of personal information, reduced performance or broken features. ” - a source

Funnily enough, if you go to the company page (below is a screenshot of its Asia Pacific version) for pirated copy reports, it looks like a page from the Windows XP manual.

There is no way to send anything, and if the user sincerely wants to report a case of piracy, he will have to make a call. 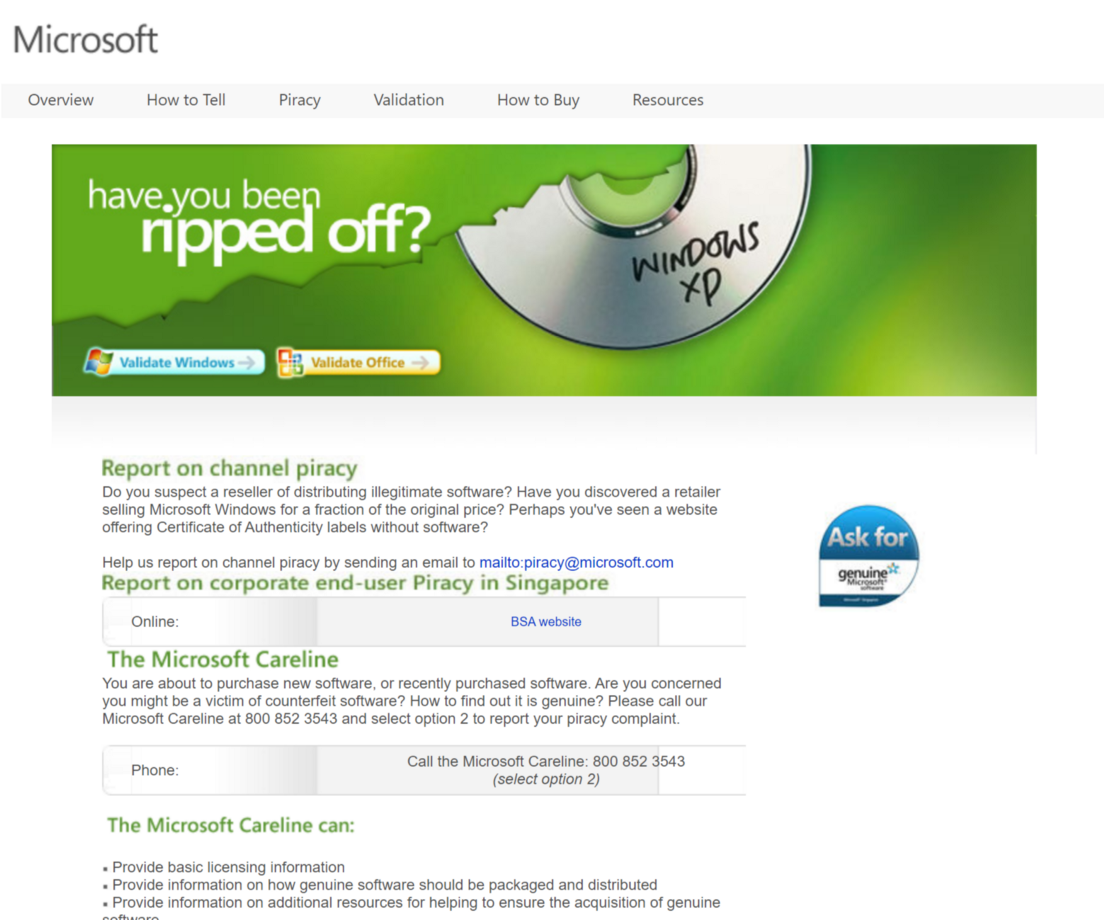 In addition, if you delve deeper into the search for anti-piracy policies created by Microsoft in the early 2010s, it turns out that all of them have now disappeared or are not being updated. For example, in 2013 Microsoft launched the program " play it safe "- an international initiative to draw attention to the problem of software piracy.

If you go to the website today, then you will not find it there anymore, only the placeholder image remains (the original post can be read here ).

This begs the question: Why isn't Microsoft worried about piracy as much as it used to?

As you remember, old versions of any software were distributed on CDs or other hardware media inserted into the computer. Basically, this meant that if you can make a copy, then twist the product.

In addition, a "crack" was usually required, that is, a fake key generated to bypass the Microsoft registration procedure, and that's it, voila - you have a completely working "free" product.

However, over time, as SaaS evolved, it became increasingly difficult to counterfeit copies of Microsoft products, especially those that moved to the SaaS model.


It became clearer that SaaS cannot be hacked

With the development of the paid subscription model, many products began to move to SaaS, and, as you can see from the Google Trends graph, fewer people are looking for jailbroken software, because you simply cannot find a fake copy for it.

If you enter "Microsoft windows crack" or "Microsoft crack" into Google Trends, you can see the following picture.

For example, for such modern products as Slack or Salesforce, it is almost impossible to find a "jailbroken" version.


What about old copies of the software?

Given the above, one might argue that people can use older versions of the software. This is especially true in the case of developing countries that are still continuing to build their technological infrastructure.

Even if you have a physical copy of the software, you still have to pass verification on the official Microsoft servers for authentication.

However, Microsoft has long recognized that while piracy costs a company millions or billions of dollars, it is also a marketing strategy for the business.

Previously, distributing software from computer to computer required the production of millions of CDs and partnerships with hundreds of partners to distribute products to customers around the world. It cost Microsoft a ton of money, not to mention marketing costs that required a fortune.

Thanks to piracy, software has spread around the world through people who illegally transfer it to each other. This was especially important in the early stages, when Microsoft had much fiercer competition.


And it's not just Microsoft.

Companies like Adobe also allow piracy to spread, and just like Microsoft, the illegal exchange has given the company leadership in its field.


“It's easier for our software to compete with Linux in the presence of piracy than without it. Seriously, you can get a real system for the same money. " Bill Gates on Microsoft in China

It's funny that piracy has become the freemium version of the products that most programs have today. With competitors such as Google releasing their own products, Microsoft intends to make its product available to everyone and strengthen the position of its OS and Office.

While Microsoft still loves to chase resellers selling its products , it is no longer so aggressive against consumers and small businesses.

Microsoft knows that if it gets too aggressive, it will have to deal with negative criticism that competitors can take advantage of. It also makes the company look like a “tech robber” offending small businesses or consumers.

In 2015, a Czech hacker named Jakub was accused of creating pirated copies of Windows and other software. He was given a three-year suspended sentence and a huge fine of approximately $ 223,200 (in kroons), which he would not have been able to pay.

However, instead of levying a fine, Microsoft decided to do something different. The company said that if Yakub takes part in the recording of an anti-piracy video and it gets more than 200 thousand views, then he will only have to pay a small fine.

The video has received over 1 million views to date. and even though there was some backlash, imagine how much additional negative PR Microsoft would get if it was more aggressive.


Microsoft is expanding its business to Africa

Thanks to this policy, the company, with the help of partners, hopes to increase the volume of implementation of its products and their availability on content. After reading Microsoft released fasting it becomes clear that the initiative is more aimed at informing about the problems of software piracy, rather than suppressing it.

In one of the fastest growing markets that Microsoft is trying to capture in the next decade, it has taken a passive approach to piracy.

Microsoft realized that being too hard on piracy could get too bad a backlash, so now it looks like Microsoft has put its war on pirates on hold.
Tags: business, licensing, microsoft, software development, technology
—

JohnSciflare April 8, 2021, 4:57
Great blog! Thanks for sharing this blog. Your website is almost every time, the solution to my every query.
0