In a distant, distant galaxy 700 million years ago, a neutrino was born, telling us about the death of a star due to a black hole

Having traveled insane by our standards, the neutrino reached the South Pole in October 2020, where it was registered by an elementary particle detector. This complex system is located right under the ice, it serves to detect high-energy particles coming to us from afar. A few months later, a telescope in California was able to "see" a flash of light in the very galaxy referred to in the title, and where the neutrino came from.

Scientists believe the two events are closely related. With a high degree of probability, we can say that the black hole destroyed a nearby star. Well, we saw and registered manifestations of this meeting. It may well be that it is precisely such events that are the source of streams of cosmic particles of ultrahigh energy, over the origin of which scientists have been puzzling over for many decades.

“The origin of high-energy neutrinos is a scientific enigma. Mainly because the neutrinos themselves are not so easy to catch and study, ”said one of the study's authors, Siert van Velsen of New York University.

Neutrinos are the most abundant particle in the Universe and extremely rarely interacts with any kind of matter. Every second a lot of these particles pass through us, not reacting in any way to what is happening. Isaac Asimov called the neutrino "the ghostly particle of the atom" for this very reason.

And precisely because neutrinos rarely interact with matter, these particles are very difficult to detect. But if there is interaction, then it gives a lot of information. In particular, you can get some clues about distant, very distant systems. These clues, together with the results of observation with the tools available to us, allow us to expand the volume of knowledge about the universe.

Most of the neutrinos that pass through the Earth are generated by the Sun. But there are also particles that come to us from very far away. This is how it is a neutrino from a galaxy that is many light years away from us. According to the researchers, neutrinos began their journey from a galaxy in the constellation Dolphin. 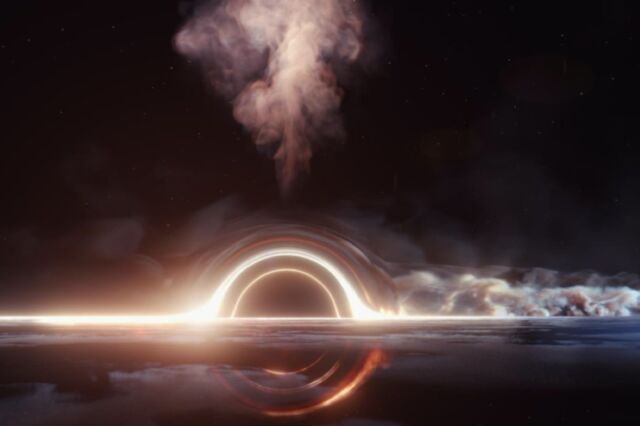 Stars die less often due to black holes, but astronomers have already observed this phenomenon. It happens after a wandering star comes close enough to a black hole and finds itself in a gravitational trap. As a result, the star is simply torn apart, and most of its matter is absorbed by its neighbor.

The event that got the number AT2019dsg , provoked by the impact of a super-massive black hole, the mass of which is 30 million times the mass of the Sun. The supermassive black hole of the Milky Way, by the way, is “only” 4 million times heavier than the Sun. This object is perfectly visible in the X-ray range, and it can also be detected using radio telescopes. The event itself is called "Tidal destruction event" and is well known to scientists. A tidal disruption event (TDE) is an astronomical phenomenon that occurs when a star comes close enough to the event horizon of a supermassive black hole and is torn apart by the tidal forces of the black hole, undergoing spaghettification.

“The idea of a black hole sucking in a nearby star sounds like science fiction. But this is exactly what happens during tidal destruction. " stated Thomas Wevers of the University of Cambridge Institute of Astronomy after registering one of these breaks.

In 2018, scientists announced the first-ever image of the effects of a star bursting by a black hole, which weighs 20 million times the mass of the Sun. The event was recorded in the Arp 299 region, which is 150 million light years from Earth. In the fall of 2020, astronomers recorded another such phenomenon, the results of the study were published in the journal Nature astronomy ... 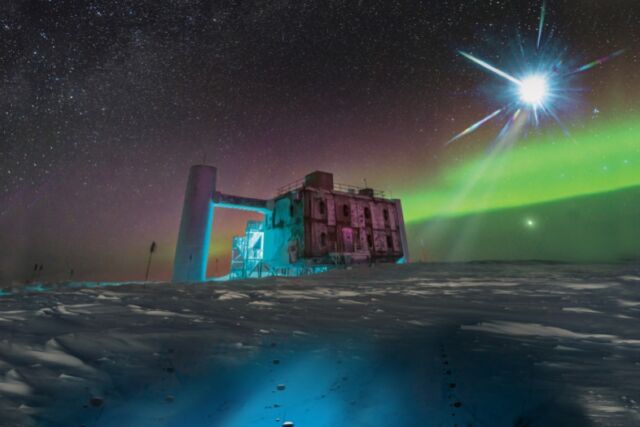 Station for detecting neutrinos at the South Pole of the Earth
The probability of detecting high-energy neutrinos is 1 in 500. And now astronomers have recorded the first particle in history, which was formed as a result of a tidal destruction event. “The discovery of neutrinos indicates the existence of a natural generator of elementary particles near the accretion disk. And the combined analysis of data from radio, optical and ultraviolet telescopes gives us additional evidence that TDE acts as a giant particle accelerator, "- said the author of the study.

It is also noteworthy in all this that the study was carried out taking into account several sources of information about the event at once - particle detection and direct observations of a certain region of the Universe. Combined observations are a powerful tool in the hands of astronomers. So, if scientists just fixed neutrinos, it would give practically nothing to science. The detection of a tidal disruption event is remarkable but, as discussed above, is not exceptional. But the detection of the event with the subsequent capture of neutrinos gave a lot to science - after all, now it becomes clear where the high-energy particles come from, if not all, but at least a part.

Scientists hope that in the future it will be possible to see not only the tip of the iceberg, figuratively speaking, but the entire iceberg, that is, astronomers will be able to understand where the particles of high and ultrahigh energies come from. For this, a new generation of telescopes is now being built, which allow tracking regions with TDE and studying the consequences of such events. In addition, the creation of a powerful IceCube neutrino detector will increase the number of captures of high-energy neutrinos by at least 10 times.