In the life comes a moment, when anyone who wishes to write programs for the products of Apple company has to learn a new programming language Objective-C.


The problem of reusing a written code and its portability make the programmers constantly look for the new ways to organize, structure and abstracting it. In order to solve these problems are created the new programming paradigms, design template tooling, new languages, compilers, standard libraries, software platforms and frameworks. Thus were formed the paradigm of subprograms (procedures) that is implemented by the processor’s commands CALL \ RET and the stack (in fact, moving the implementing stream at the address of random rather than following the current command with further return). Then, the paradigm of modules (each file is a separate translation unit) that produced a two-stage translation: compilation of modules and their linking (static or dynamic) in the executable module.
More detail...
Tags: mac os x, objective-c
— 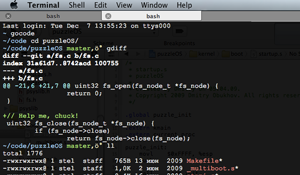 It is not secret that productivity of work directly dependents on the used instruments. Let us try to disable the syntax’s highlight in the favorite text editor and we immediately will notice the difference.

This article will highlight some things that will do the work in the terminal more enjoyable and productive for users of MacOS X, and may be useful for users of other operating systems.


Visor is SIMBL- plugin for Terminal.app from BinaryAge, which allows opening a terminal using the hot key and it makes of it something like a console in Quake.