For testing, the code should be selected and copied directly from tweets . - approx. trans.

I recently found this tweet from <a rel="nofollow" href="https://twitter.com/FakeUnicode/"> @FakeUnicode < / a>. There was a JavaScript snippet that looked pretty innocuous, but displayed a hidden message. It took me some time to understand what was going on. I think that the record of the steps of my investigation may be of some interest to someone.

Here is the snippet:

What would you expect from him?

Here we use the for in loop, which passes through the enumerable properties of the object. Since only the property A is specified, we can assume that the message with the letter A will be shown. Well ... I was wrong. : D

This surprised me, so I started debugging through the Chrome console.

The first thing I did was simplify the snippet.

I had to take a step back and look at the length of the line.

Interesting. Then I copied A from the object and immediately realized that the Chrome console was working with something hidden, because the cursor was "frozen" and did not respond to a few keystrokes left / right. 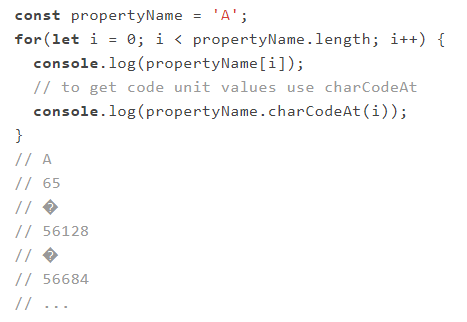 Here we see the letter A with the value of the code unit65, followed by several code units in the region of 55 thousand and 56 thousand, whichconsole.log visualizes with a familiar sign of the question. This means that the system does not know how to handle this code unit.

These values ​​are parts of the so-called surrogate pairs , which are code points with values ​​greater than 16 bit (i.e., code points greater than 65536). This is necessary because Unicode itself defines 1 114 122 different code points, and JavaScript has a UTF-16 string format. That is, only the first 65,536 code points from Unicode can be represented by one element of the JavaScript code unit.

Higher values ​​can be calculated by applying a crazy formula to the pair, resulting in a value greater than 65536.

Bold inset: I read the lecture on this topic, which can help you understand the concept of code points, emoji and surrogate pairs.

So, we found 129 code units, of which 128 are surrogate pairs representing 64 code points. So what are these code points?

To get the value of the code point from the string, there is a very convenient loopfor of which runs the code points of the string (not the code units, as the first cyclefor), and also the operator ... that is used in for.

Because console.log does not even know how to display these code points, we need to figure out what we are dealing with.

Note: note that JavaScript has two functions for processing code units and code points charCodeAt and codePointAt . They behave a little differently, so look.

The code points are 917868.917879 and continue to be part of the Variation Selectors Supplement in Unicode. Variant selectors in Unicode are used to indicate standardized variant sequences for mathematical symbols, emoji, Mongolian square letter symbols and eastern single ideograms corresponding to the eastern compatibility ideograms. They are usually not used by themselves.

Great, but what does this have to do with it?

If you look at the ECMAScript specification , you will find that the names of the property IDs can not only contain "Ordinary symbols."

In accordance with ECMAScript specifications:

Two IdentifierName, canonically equivalent to the Unicode standard, are not the same unless they are represented exactly by the same sequence of code units.


This means that two object identifier keys can look exactly the same, but consist of different code units, which means they will both be included in the object. As in the case of the symbol ", which corresponds to the code unit with the value of 00ee and the symbol with the circumflex <code lang =" cpp "> COMBINING CIRCUMFLEX ACCENT </ code>. So it's not the same thing, and the object includes double properties. The same is done with the Zero-Width joiner or Zero-Width non-joiner . They look the same, but they are not!

But back to the topic: the found values ​​of variant selectors belong to the category UnicodeCombiningMark, which makes them valid identifier names (even if they are invisible). They are invisible, because with high probability the system will show the result only if they are used in a valid combination.

What makes the escape function so passes through all the code units and treats them as an escape . That is, it takes the first letter A and all parts of the surrogate pairs - and simply converts them again into lines. Invisible values ​​"are converted to a string form". So there is that long sequence that you saw at the beginning of the article.


The trick is that @FakeUnicode chose specific variant selectors - those that end with a number that sends back to this symbol. Let's look at an example.

An empty string also does the trick. The meaning of [] is that in this way you can bypass the quotes filter or something like that .

In this way, you can encode the whole message with invisible symbols.

So if we look again at an example:


A: 0 - hereA includes many "hidden code units"
these symbols become visible with the help ofescape
mapping is performed using replace
The result will again be unescaped and ready to output to the notification window

I think it's pretty cool!

This small example covers many Unicode themes. If you want to learn more, I highly recommend reading articles Matthias Bienens on Unicode and JavaScript: