India has released a tablet device for 35 dollars 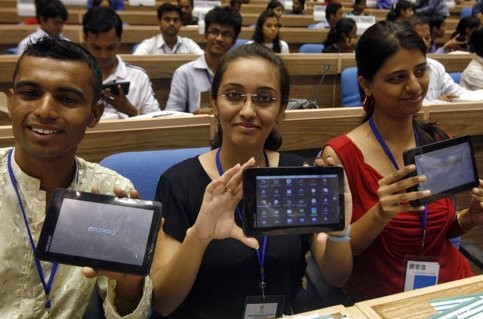 In July 2010 Indian officials said that soon will go into production an affordable tablet device that will cost only 35 U.S. dollars. Time passed and the concept of "soon" gradually transformed into "maybe, probably and possibly." However, the Indian government always has said that the tablet will be released that the device is not just fiction, but a few people believed. So, this week the tablet went on sale for 35 U.S. dollars. The truth was that the price of 35 dollars for the tablet was considering the state subsidies. Namely, at this price it will be sold to the educational institutions and their students.

If ordinary people wish to buy this tablet, they will have to pay about 60 U.S. dollars. At the beginning the government will provide these tablets free of charge to the educational institutions. Already, it is supplied 500 devices, and those who tested the device in operation say that the device is very slow. In fact, we could not expect a different result from each tablet with 256 MB of RAM.

The tablet was called Aakash, it has a 7 inch display, 32 GB memory that is available to a user, 256 MB of RAM and it runs on Android 2.2 Froyo. There are also two USB ports and a Wi-Fi module. Battery’s capacity of 2100mAh will provide work for 2-3 hours.

Unfortunately, Android Marketplace is not available, despite the fact that some applications are installed by the manufacturer. The tablet was developed by Datawind Company, (UK) in collaboration with Indian Institute of Technology. The tablet has made in India and it will be in stores next month. Students also receive a tablet for 35 dollars next year.

The Indian officials claim that this tablet should reduce the "digital" division between the rich and poor. Now, the poor can get a good and practical device that allows them to work adequately. Despite the stated amount of production only 2100 of tablets will be made per a month. Slightly later, the number of produced tablets will be increased.