Thorny path of project monetization on the Internet 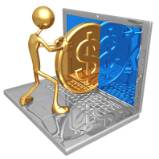 My first attempt to make money was successful. I have made a website offering instructions for solving customer’s problem. At first I was trying to sell some advice about the wonderful results and the obvious benefits of buying instructions online. But no one wanted to believe and to take risks buying that. I intuitively understood that a part of the instruction should be given free of charge, so the potential buyers could try it out. They tested it and saw the results, so they decided to buy the entire instructions for solving the problem.

I remember when I was standing in line with the older people in the offices of Russian Post. How I filled out the bunch of different payment forms for the potential buyers who will buy my instructions. Also, I conducted a forum for the customers who already got my instructions.

I changed some wording and the information blocks on the website, and my sales have grown. First, the conversion rate of visitors into buyers has been low. But I worked hard to improve the look of my site and the pages for a visitor.

I have bought ads on the different websites, and eliminated sites that gave poor conversion of visitors into the buyers. Finally, I have exhausted all sources of advertising that were affordable to me. I was not able to reach the high sales, because the advertising on the major resources was just too expensive for me. Also, I could not raise the instructions’ price for the buyer. It just did not work. The conversion of visitors into the buyers dropped.

My business worked only for a few months, because the digital products spread fast and become available free of charge on the Internet. So I was forced close my website, otherwise I could begin to lose money on the advertising.

My second attempt was not successful strategically, but it was successful tactically. This time I decided to go global. I wanted to make a public product, which would be difficult to copy and distribute free of charge. I created an online service that was free. Initially, there was an idea to grow to large sizes and earn some money on the advertising. Once I was impressed with the resources that have a big visiting traffic, where I could not afford to buy the advertising. I counted their hypothetical profits on the calculator and wanted the same success they have.

Time passed and my service was gaining popularity. Some investors started using my service that was a big surprise for me. Together we made some business plan how to make money on my website. So the paid accounts were introduced and placed some ads of other banner networks. Since it was not considered so important at the moment in comparison with the growth of the service, then the revenues were purely symbolic from these activities.

However, at one point the investment money ran out. I had to think about very strongly how to pay the bills, such as an internet, staff salaries, electricity in the data center and so on. By that time, it was clear that the paid accounts give very little money, but the income from advertising is in several times higher. The choice was obvious where to put the effort. I have created an advertising department. So I hired a good salesman, who became a head of the department, because I had no sales experience. One of our investors visited our foreign competitor and gave us ideas on possible options for promotional offers.

We began to sell everything. We sold watermarks in the pictures of users, email subscription on the special offers from advertisers, discount coupons, opportunity to become a sponsor, and the banner ads. Finally, we have developed the following sale method. We wrote a letter to potential clients that had just one sentence. Yes, only one line of text. First, we tried to write detailed commercial offers, but it was not as effective. It turned out that it is much easier to write an intriguing letter, which says who we are and to whom we appeal, and what we want to discuss. This type of letter worked, the client paid attention to us, and the dialogue was started. Further progress has led us to the fact that we started forming the commercial offer for needs of a specific client. We studied the website of the client, what kind of goods it sells, and then we wrote in our offer something like that, “we could help to promote your shoes using the following advertising tools. So clients bought our product.

But there happened a global financial crisis. Our sales have collapsed along with the world market. I had to fire some employees to survive. The crisis has exacerbated our problems with the sale of advertising. We could not get into the advertising market where the large advertisers such as Coca-Cola are. There were a number of reasons for that. Finally, we closed the sales department.

I got a depression from the financial crisis, so I began to think about other ways to make money. Eventually, I turned back to the fee account users. I tried to increase my income from them in the following way. After I reviewed the purchase information, I saw the following. Rates were purchase once and they been never extended again. So I concluded that I have to try to increase my revenues from these one-time payments. First I cut the price to a level that purchase rate did not look like the risk of spending money. The amount was so small that any user could easily spend that much. I sent our newsletters to the users. At the beginning there was a good effect. In that month, when the newsletters were sent out, the sales went up in a few times.

But then everything returned to its initial level. I made a mistake. Next, I tried again to use the one-time purchase effect. I kept the same price, but I was selling the annual rate at a price of 1 month. This increased sales, but not much. Then I remembered that I had seen another business that boosted its sales by offering its customers to upgrade their limited version to extended one. So I added the same thing for my users in the system. Namely, every user gets a reminder before logging into the system that there is available extended version. It also increased sales. The last thing I have made it was introduction of 14 day trial period. Registered users tried the system, and after 14 days either they purchased it, or they left the service. The sales went up by half.

Eventually, my imagination was exhausted, because I could not increase sales dramatically.
There was the idea to earn money through SMS micro payments. It did not work well, because there were not enough people who wanted to pay money. But I got a good traffic of visitors. The conclusion is simple. How to make cash on visitors? I figured out that I could limit some access to the secondary pages for visitors. I got a good SMS traffic. It lasted for a few months. Then it went down again. The users did not like the fact that I made money on them.

As I already said that we won tactically, because we made some money. But we lost strategically, because the loyalty and the popularity of users went down.
My third attempt was more thought out than the previous two, and it was more successful in the strategic plan. The free service was made again. But it was specifically decided to make money on the fee users. I was trying to find the balance between service usability for free users and its limitations to stimulate them to buy the fee service. I understood the most important mistake. It takes a long time that the user ran into some limitation. And I found it. The conversion rate was very high and the balance was found. On the one hand, the users could use the system quite well and remain as free users. On the other hand, they quickly ran into limitations and made some necessary purchases, and surprisingly it did not push them to the competitors. But it was still not enough.

I started working on the pricing problem. At this time, I decided to increase the prices. It turned out that the pricing issue is like to tighten up the bolt. It is necessary to tighten until it goes tightly. If it is over tightened, it just breaks down, or in our case, the number of sales drops sharply. The number of orders dropped by 10%, but the overall profits increased in 2 times. Then I noticed that some users usually buy the service for 1 month, and the other users buy for 2, 3, 4, 5 and so on. Therefore, I changed this situation, namely the user could buy only the monthly, semiannual, annual services or more. That increased my income as well.

Next, I drew my attention to the service rates. There were so many. I decided to cut them down to two (minimum and maximum). So I limited the choice to increase an average of my income.

At this point I did not stop. I had experience from the previous project in terms of a trial period. Then it doubled my sales. But it had a flaw. The users who did not want to pay were leaving the service. It kills the service. As free users attract new potential customers there came the idea to offer a fee test trial for 14 days. But after this trial the user had always the choice to remain as a free user and not to leave the service.

Then I started thinking about those users who psychologically or fundamentally do not want to pay for any service. I got a simple idea from another field, namely to offer them additional features without any limitations. But in return they should invite 5 friends in the system. That makes the user happy and we get free advertising.

Next, in order to increase the income we began to add additional services. It turned out that we have a lot of different services to offer that are related to the activities of our users in the system. We have expanded the range of services.
At the moment I'm very inspired by the opportunities that opened ahead of us. There are many ideas and plans for the monetization. I think after a while I could describe some of them.
I do hope you will find this article useful. It gives some ideas how to monetize the online projects and thanks for reading.
Tags: monatization of online projects
—