According to my red-planet interests, I often find unusual pictures of Mars or illustrated scientific facts about this planet. Some of them are so awesome that I want to run out into the street and show them to all passersby. However, I am not sure if people will understand me on the street, but here, I hope readers will appreciate the amazing details about our neighbor in the Solar System.

Here is the first picture, and this is Hephaestus Fossae – the network of channels to the west of Highland Elysium. It was taken by a high resolution stereo camera from Mars Express satellite. In one photo is a slice of Mars’ history. Apparently, the surface was formed by the lava flows from the Elysium volcano. From that hot time remained lava tube network, which are visible in the right part of the picture. Later, a deep river flowed from the mountains, which run more than 100 kilometers and broke up into the sleeves that had width up to 5 kilometers. The flow of the river is unusual, as its considerable part disappeared into the network of lava tubes flowed away to an unknown direction using the natural network of underground tubes. In the full version of the frame could be seen much better (12MB).

Afterwards, when the climate of Mars changed and the surroundings were frozen, a meteorite fell into the river canal and made 20 kilometer crater. On the sides of this crater stretched out wings, this is an exclusive peculiarity of Mars’ craters. These wings were formed in places where the meteorites hit the surface, saturated with ice. At one time, this area could be as the Martian Arctic Ocean floor, and after the cold weather moved on the ground was frozen by the permafrost.

The next frame shows the interaction between the frozen ocean and the volcano lava. (Height map is made by Mars Express). 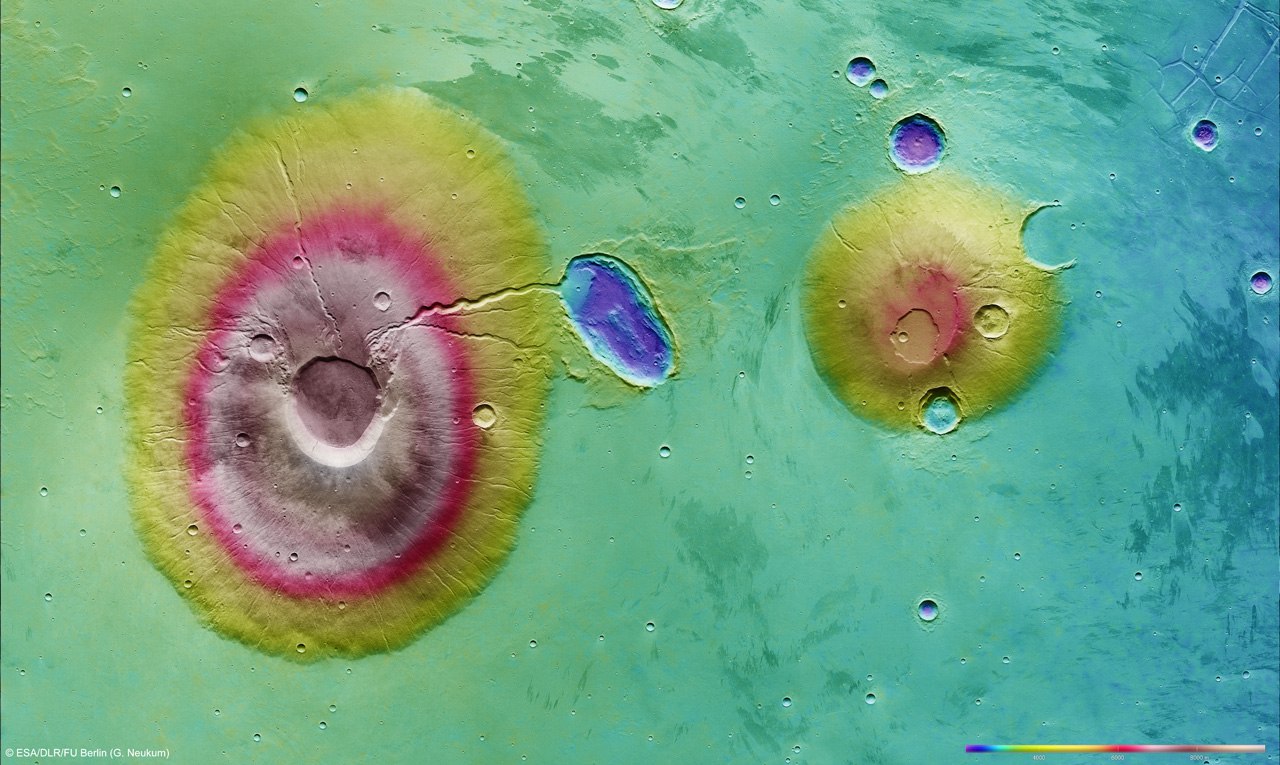 Ceranius Tolus volcano has a high of 4.5 km and rises in the north of the Tharsis volcanic province. (Full-size color has 46MB and full-size height map has 70MB). It is the fourth element (along with a neighbor Uranius Mons) in the chain of volcanoes, such as Assyrian Mountain, Peacock Mountain, and Arsia Mons. 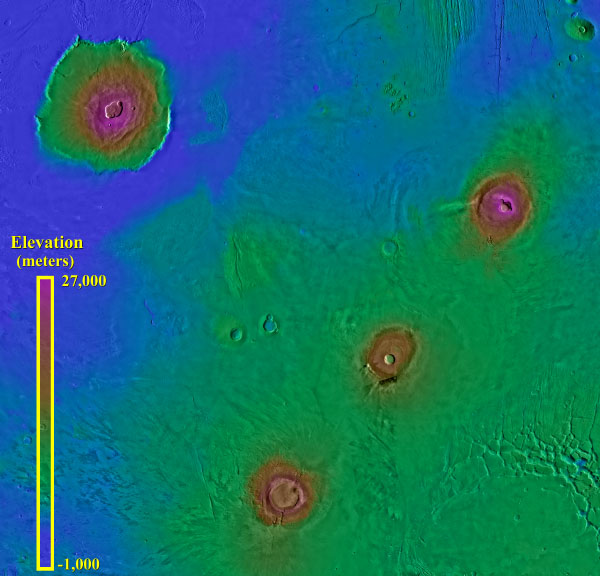 Location of four giant volcanoes that actually are in line is one of the arguments in favor of the once-existing continental drift, which was not on Mars. At least, other direct evidence of tectonic drift was not observed on the planet. But if not the movement of continents, then some other explanation of this regularity should be received, but there is none so far.

Ceranius Tolus is the smallest one out of the four volcanoes, and probably it is the oldest. Together with its neighbor Uranius Mons, it may break through to the surface. One of the last eruption occurred at a time when the Northern ocean was already frozen, and it turned into a reservoir of ice, covered with dust. The last lava flow melted an oval lake in the ice on both sides of which were formed the mud sinters.

Scientists have doubted for a long time that Mars has a lot of ice that lies almost on the surface. But the forces of heaven have helped to make certain that. 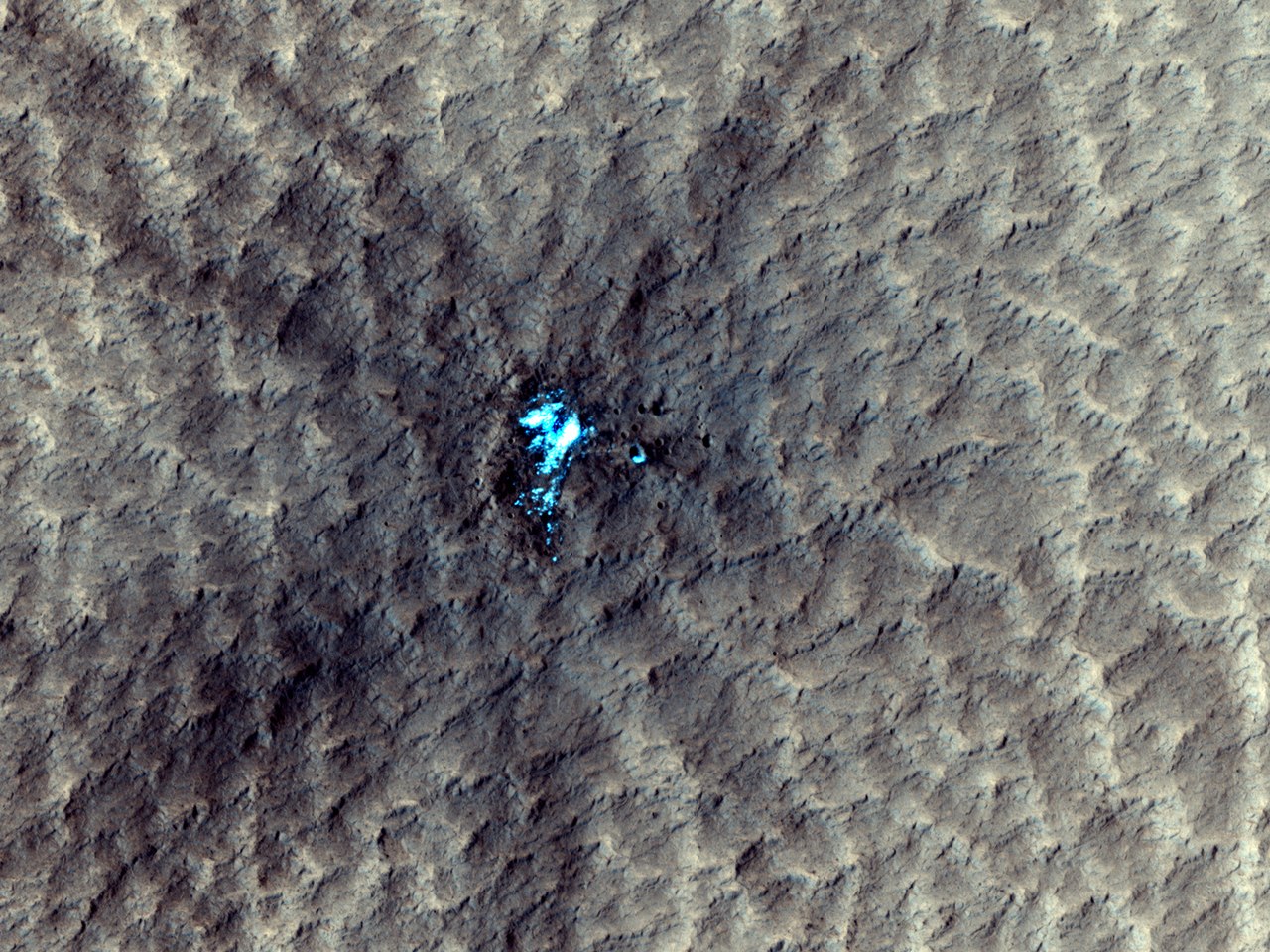 This picture was taken by Mars Reconnaissance Orbiter, and it shows near-surface deposits of water ice at the 44th parallel in the northern hemisphere (full-size has 6MB). The high-resolution camera HiRise takes the pictures in extended colors, so white ice looks blue in the picture and the gray surface looks greenish. Further observation of this meteor crater showed that the ice does not last in the open air for a long time, and it evaporates in a few days. But under a layer of dust, where it cannot warm above zero degrees, the ice can lie for millions of years, waiting for the climate warming or arrival of colonists from the Earth.

Not all the water lies beneath the surface on Mars calmly. There is the water, which was very rough a few million years ago. (Here is a picture of Mars Reconnaissance Orbiter). Fantastic glaciers (Hellas Planitia) have only recently attracted close attention. Researchers could not believe for a long time that this is not the lava, and that only the water ice may be as viscous substance on Mars. But now the climate models are made, which explain the appearance of these glaciers. According to the accepted theory, Mars experienced the periods of strong change in the axial inclination, which occasionally exceeded 45 ° for thousands of years (now the axial inclination of Mars is similar to Earth - 25,19 °). This phenomenon is related to the fact that Mars does not have a balancer like Earth's Moon. When there was strong axial inclination of Mars, existing polar caps were dusted, and the new poles began building up the ice. The South Pole was located just in the area of the eastern Hellas Planitia during such inclinations.

There are the craters on Mars, and their origin is still unknown to the planetary scientists. The largest of them is called Orcus Patera (full-size has 45MB). 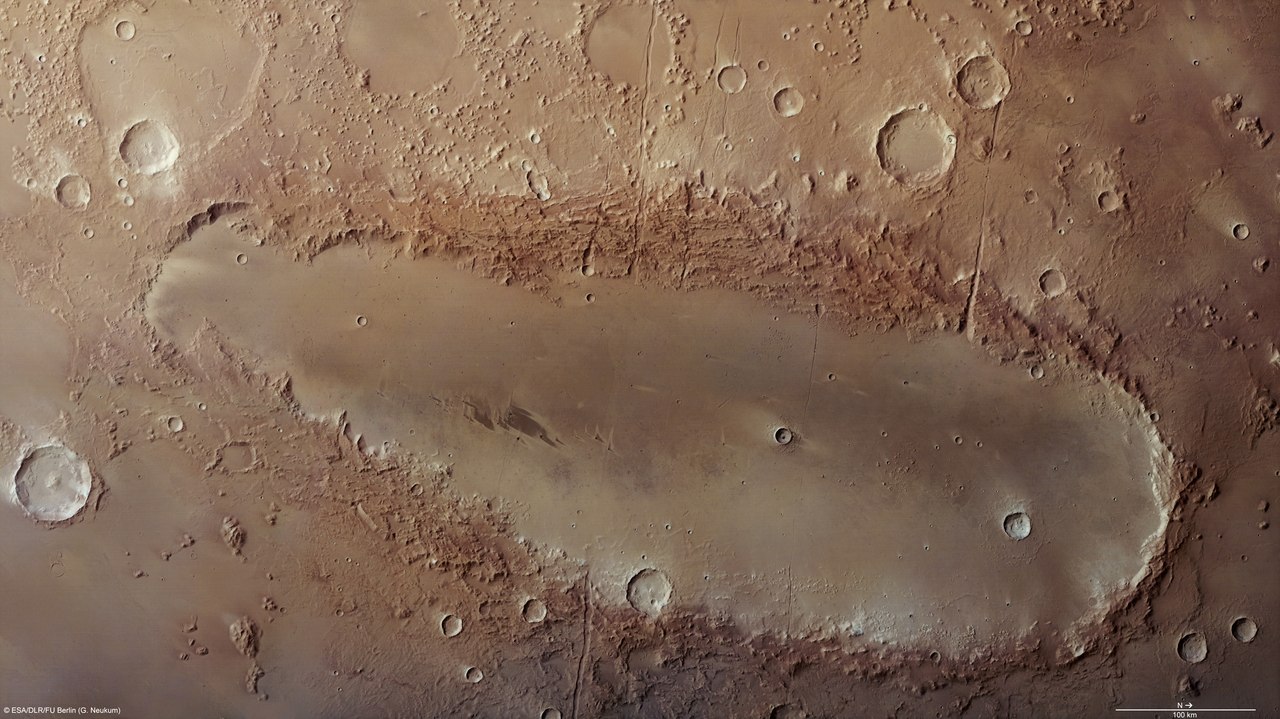 Patera is an epithet that is given to the volcanic craters and calderas on Mars. But 380 kilometers long Orcus crater does not have volcanic traces, though it is filled evenly with spilled lava. There are several hypotheses for its origin. Tectonic hypothesis states that it was the regular round crater, but then it was squeezed from both sides during the tectonic movements of the crust, and it became the oval. This exotic assumption is intended to give some alternative explanation for its origin. As a rule, the enormous energy that is released during the fall of the cosmic body of this magnitude, causing its destruction. As it turns out the stone about 80-100 km in diameter entered the atmosphere of Mars, then it furrowed the canyon and quietly went on a new trajectory. Collision energy melted the stone base, and Orcus Patera turned into a giant lake of lava.
Perhaps, an iron asteroid could stand this collision, but there is not any exact answer yet.

This oblong crater is not alone on Mars, but it seems that nowhere else in the solar system were such collisions. At least, I do not know such examples, and the scientists who analyze this Mars Express picture don’t want to believe that this is possible.

The thought that it's impossible visited me when I first saw this picture (full-size has 0.4MB).

This is not Photoshop work. This is the real part of the relief at the North Pole of Mars that was taken by the Mars Odyssey satellite. Even NASA that carefully chooses the names called it as the Reptilian Dunes. Despite the exotic look, They are only sand dunes, which are formed by the polar winds.

There are a lot of pictures and facts from Mars that make me say, Wow! Now, I am finishing my article, but if readers will like it, then it is possible to continue it.
Tags: Mars, Mars Express, Mars Reconnaissance Orbiter
—

LavonnaKitz February 4, 2014, 2:38
Wonderful work! This is the type of info that should be shared around the net. Shame on Google for not positioning this post higher! Come on over and visit my website . Thanks =)

krismartin12 IT Educational Process Who can do my homework for me?
mistatwista3 Development Obtain a whitelabel crypto exchange software that is everything you need to transform your business
swathi C++ digitaltechupdates
sarahsmith Development EAMS software - Get the best EAMS software
VanessaJane Development Asset Tokenization- Everything you need to know!
AnnaLisbeth Crypto Best white label bitcoin exchange
Ayyash Development Strategies To Propel Your Multi-vendor E-commerce Platform In The Market
Miaperla Development Turnkey Cryptocurrency Exchange Software
katrinkunze Infosecurity Top 4 secret techniques to earn from your cryptocurrency wallet apps!
SpotnRides Development What Are All The Strategies Need To Improve Your Taxi Business Using SpotnRides Taxi App Solution?
All in live
© 2011-2020 UMumble. All Rights Reserved.